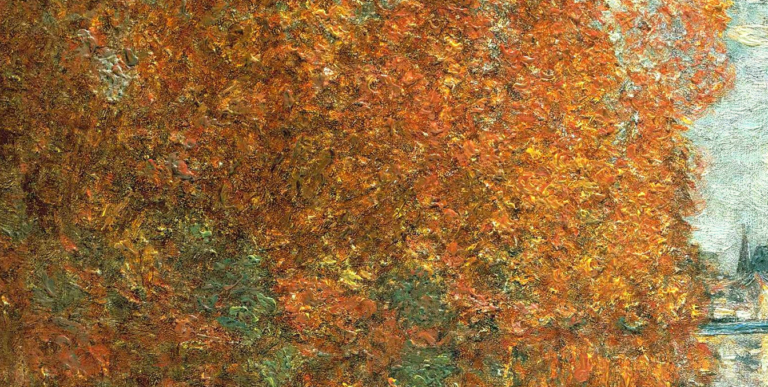 Claude Monet painted Autumn Effects at Argenteuil in late 1873, which was the moment when the Impressionist movement started to roar on the Paris art scene. The subject is a view of Argenteuil, an expanding industrial centre in the suburbs of Paris.

Argenteuil was a frequent subject for many Impressionists because this little town, just a few miles from the French capital, was a popular weekend resort for yachting, boating and relaxation. Although at first glance the landscape might look untouched by humans, in the distance we see a factory chimney and an old church tower.

The picture was painted  out-of-doors in short and quick strokes, probably from Monet’s “Studio Boat” which was moored at Argenteuil. The artist reworked the composition many times and if we look at the right side of the painting, we can still see where he scraped away layers of paint from the trees, probably with the hard tip of his brush.

The painting is full of vibrant colours of a sunny autumn day by the water when the leaves and the sky are reflected in the river Seine, a shocking visual effect for the audience of the time. The striking contrast between golden foliage and bright blue water can remind us of Japanese prints, especially Hiroshige’s Monkey Bridge in Kai Province (1853). Hiroshige’s blue water is framed asymmetrically by gold and green planes and so is Monet’s Seine placed between golden and green trees. The painting is on display in the Courtauld Gallery in London.