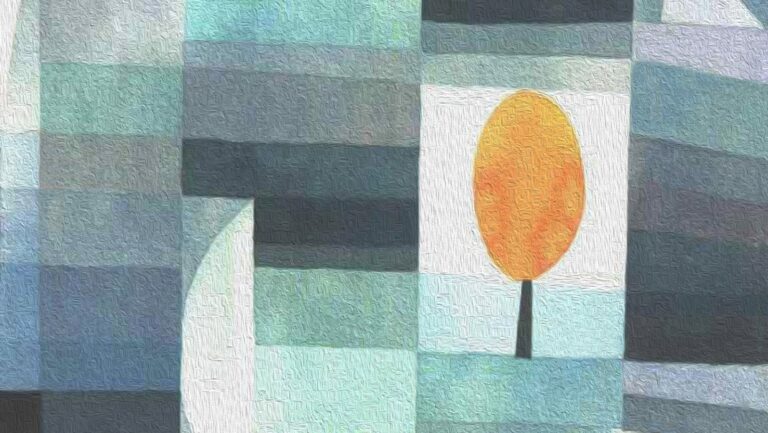 I really like the season of autumn, especially because of its color palette: reddish and yellowish leaves, beige coats, green wellies, orange pumpkins… The colors of autumn are warm and they create a unique atmosphere of coziness. Can you feel it in Paul Klee‘s autumn paintings?

Here, Klee painted a landscape familiar to him, as he was born in Münchenbuchsee, Switzerland. Although it is very abstract, we can still distinguish the shapes of small country houses, lost somewhere in the Swiss mountains. Are they so brightly colored by the setting autumn sun, or is it more the artist’s internal feeling of autumn projected onto their walls?

Klee’s highly original style had its roots in Expressionism, Cubism, and early Surrealism. His works often seem simplistic, childlike, and naive. Sometimes they lean towards geometry, sometimes towards disegno, that is drawing. They vary in style, but also in technique, as Klee used various media, including watercolors, ink, oils, pastels, often combining them together.

Klee, like Expressionists, tried to express his own mood in colors. This is why his paintings are so varied chromatically, ranging from nearly monochromatic to highly polychromatic.

Klee’s father was a musician, and Paul himself was trained to play music too. His interests in sound and harmonies are very evident in his paintings (can you “hear” the rain falling in this small village?). Poet Rainer Maria Rilke wrote about Klee in 1921:

Even if you hadn’t told me he plays the violin, I would have guessed that on many occasions his drawings were transcriptions of music.

Not only was Klee inspired by music, but music was inspired by Klee too! At the end of the 1960s, a group of Cleveland-based musicians created a series of songs called “electronic paintings.”

Jazz composer Chuck Mangione and local producer-arranger Roger Karshner arranged the album Performing Musical Interpretations of the Paintings of Paul Klee, with a glossy leaflet including lyrics and reproductions of various Klee pictures, but it was not a hit. Shortly afterwards, Mangione’s brother Gap recorded a track Diana In The Autumn Wind (named after the drawing above!), an instrumental jazz-pop LP, which you can listen to here: