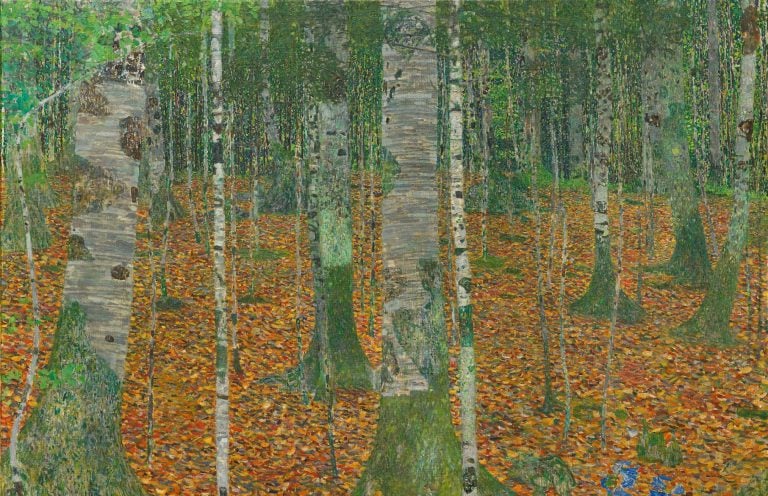 Gustav Klimt, the master of the Vienna Secession, is known for his golden paintings full of fantastic creatures, rich ornaments, and beautiful women (who are often naked). However he also had another, lesser-known side called the Waldschrat – someone who lives in the woods on his own. From 1901 to 1904 Klimt completed several paintings of different woods which sometimes are half-abstract, sometimes realistic, but they are always breathtaking.

During his summer retreat in Litzlberg on Lake Attersee, Klimt started his days at 6 o’clock taking long strolls in the woods. The effects of these walks are amazing; the artist must have felt quite comfortable in nature. Here he chose to paint a calm autumnal scene rather than the mysterious, dark heart of the forest.

Klimt painted birch forests a couple of times. Young birches were a popular motif for painters as they symbolize the season of spring and the rapid growth of young people. (a symbolism that perfectly fitted the ideology of the Secessionists.) Klimt himself was around 40 when he created these paintings – maybe it was a fruit of nostalgic remembrance of the artist’s youth?

For his tree paintings, Klimt often chose square canvases — a pure geometric shape that was also one of Vienna Secession’s dominant decorative motifs. In the flowering branches, each dab of paint indicates a single leaf, a blossoming flower, or a piece of fruit. The flat flickering field of color evokes both Post-Impressionist painting and Byzantine mosaics where the forest, or a single tree crown, is similar to a precious carpet. It is a perfect whole. Klimt continued to add the dabs to the Pear Tree even after giving it to Emilie Flöge, his muse and possibly a mistress, in 1903.

What is also characteristic of Klimt’s tree scenes is that we never see the sky. It is only suggested through tiny gaps in the upper parts of the paintings.

This green horror vacui is a natural consequence of Klimt’s interest in ornament and rhythm. At this point in his career, he had steered away from his gold phase and was influenced by Impressionism and Neo-Impressionism, as were many of his colleagues at the time. However, in Klimt’s pieces, we don’t sense the stiffness of Signac and Seurat’s pieces – Klimt added depth to the landscape within the painting by using vertical brush strokes.

In this painting, Klimt shows us a fragmentary view of the Schlosspark of Kammer on Lake Attersee. It is very abstract, only the tree trunks in the lower part of the painting give us the hint that the green mosaic above represents tree crowns. Above them we see only a sea of dabs.

When I look at all these beautiful paintings of trees, parks, and woods I ask myself one question – was Klimt a tree hugger?

Have you ever looked upon Gustav Klimt’s portrait of The Lady in Gold and wondered why she was so worshipped? What made the artist immortalize her...