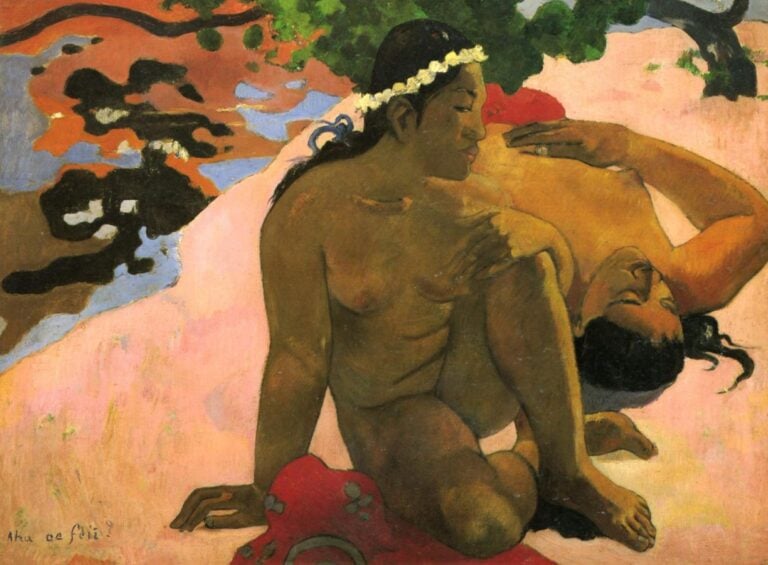 Paul Gauguin, What! Are You Jealous?, 1892, Pushkin Museum of Fine Arts, Moscow, Russia.

Pablo Picasso and His Women

When Paul Gauguin visited Tahiti in the 1890’s was he a genius in search of paradise, or a seedy sex tourist?

A painter, printmaker, sculptor, ceramist and writer, Gauguin was one of the giants of Post-Impressionism and Modernism. His use of vivid colours, simplified forms and flattened perspective led art scholars to credit him with influencing Primitivism, Fauvism, Cubism and Surrealism.

Gauguin did not lack for confidence. I am a great artist, and I know it, he boasted in a letter in to his wife, but in his lifetime, his paintings sold poorly. By 1890 his career had stalled. He was producing very little art and was making no money to support his children. His wife Mette had abandoned him and taken the children.

He became convinced that he should head to French Polynesia, to escape to an untainted world, far from his personal and financial difficulties. Like many white westerners, he dreamt of the fantasy paradise. Gauguin was fascinated by accounts of Tahiti’s culture and religion – these stories fired his imagination. Sadly the culture he sought had already been ravaged by missionaries and the diseases of the colonial invader.

Gauguin promised his wife that he would return to France rich, influential and ready to make a new start. In 1891 he took a 3-month passage to the capital of Tahiti, Papeete, but on arrival he found it ‘too french’ and too expensive. He soon moved on to a native style bamboo hut in a smaller village, Mataiea, in search of his primitive idyll. By the end of the summer of 1892 he had taken a 14-year-old wife, Teha’amana, who was soon pregnant.

A year later Gauguin abandoned Teha’amana and returned to France, with just four francs in his pocket. His Tahitian paintings were starting to sell however and Gauguin set himself up in the bohemian Montparnasse district of Paris, wearing exotic Polynesian costume and running a weekly ‘salon’ specialising in his own self-aggrandisement. True to form he sought out an affair with a teenage Indian/Malayan girl.

Relations with his wife Mette were beyond repair and Gauguin became disillusioned with the Parisienne art scene. He asked contacts to raise money for a return to Tahiti, and a friend arranged a cheap passage for him in June 1895. Although he did produce more incredible work, this was not a happy time, and Gauguin died sick and almost penniless, aged 54 on May 8, 1903.

The son of a political journalist and a prominent feminist, the trajectory of Gauguin’s personal life is perhaps surprising. He was clearly driven by an intense desire to explore the art and culture of Tahiti. But equally, he seems to have been driven by a desire to escape from social conventions and morality.

To look at one of the Tahiti paintings, there is no denying the exquisite rendering of those golden skins set against the complementary rich blues and greens of the tropical glade. His scenes depicting Tahitian life are considered possibly his finest works. But after that gasp of sensual delight upon seeing the work, we must remember that these brown-skinned nudes were more than just Gauguin’s models – they were his sex slaves. Whilst in Tahiti, Gauguin slept with countless women. He married three times and infected all with syphilis. One of his brides was aged 13, two were aged 14.

Gauguin has been both championed and reviled by art history. The art remains, of course – it is monumental. Gauguin captured Tahitians at a crossroads between old and new, between indigenous and colonial cultures. We can marvel at the protean genius of Gauguin, but let us never be fooled by the unsustainable myth that artists are beyond the judgement of us lesser mortals.