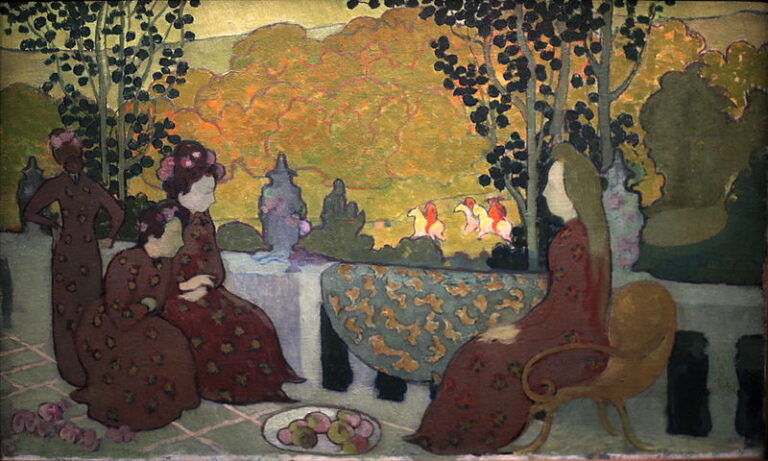 Multiple times I've told myself while writing other articles: "I finally have to write about the Nabis!". And still haven't done so. Why, why, why, if they are one of my favourite groups? Hopefully they will become one of yours, too.

“Nabis” means in Hebrew “prophets.” A group of students at the Parisian Académie Julian, who were disappointed with the strict teaching methods and representational painting, in the fall of 1888 form a brotherhood and called themselves "Les Nabis". They rejected the Renaissance idea of painting as a window onto a fictional world, they saw painting as a way to express personal emotions and spiritual truths (doesn't it sound familiar to all fans of Expressionism?) By abandoning linear perspective, illusion of depth, and modelling, they freed form and colour in loose, brisk and bright brushstrokes.

Why the prophets, by the way? Well, they saw themselves as liberators of stiffened art, similarly to the liberators of ancient Israel. The Nabis wore beards and even came up with a secret language, signing their letters with a cryptic: E.T.P.M.V. et M.P.  (In your palm, my word and my thoughts).

If you remember the Arts and Crafts movement who wanted to make art and beauty accessible to everyone and introduce them into people's lives and homes, the Nabis too designed patterns for textiles, wallpapers, ceramics, furniture, or stained glass, stressing the unbreakable link between fine arts and design, and fine art and life. Often working on personal commission, they ventured out of their studios to work on site, designing large-scale decorative schemes for specific interiors. Here, Édouard Vuillard painted a series of five panels for the Parisian apartment of Thadée and Misia Natanson, in which we can find echoes of Natansons' guests such as Stéphane Mallarmé, or Claude Debussy.

Denis was the movement's theoretician who in 1890 wrote a famous phrase: "Remember that a painting – before being a battle horse, a nude woman, or an anecdote of some sort – is essentially a flat surface covered with colours, put together in a certain order". It's all about the eye, he means, and it's true that his paintings should always be looked at with symbolism in mind because Denis was the "Nabi of the beautiful icons".

Bonnard is known as one of the greatest European colourists and so he cared more about the emotion and expressing the feeling of a moment, which he did by creatively handling colour and composition. However, he was never as obsessed about symbolism as other Nabis members, and having met Henri Toulouse-Lautrec in 1891, he began showing his works on his own at the annual Société des Artistes Indépendants.

Vuillard was a comprehensive artist who loved taking photos (he got his first Kodak in 1897), painting theatre sets and programmes, decorating interiors of private houses and chic Parisian cafés, or painting on simple screens. However, he is probably most famous for his homely interiors: on the contrary to other members of Les Nabis, Vuillard focused on domestic scenes, winning the ‘intimist’ title.