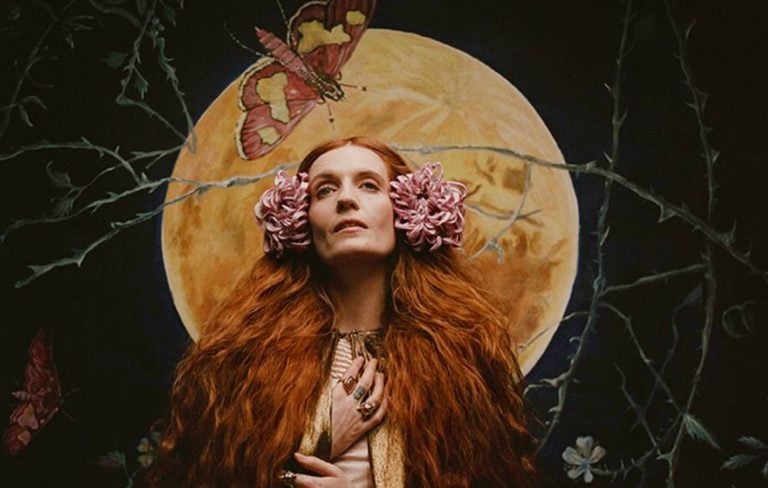 We all know Florence Welch, the leader of indie-rock band Florence + The Machine. And if you don’t, I suggest you find her cosmic music right now and open a whole new amazing world! Florence herself seems to descend to us directly from a painting. We can find her art twins on paintings from many periods. But mostly Florence looks like she could easily have been a Pre-Raphaelite Brotherhood muse! See the examples of Pre-Raphaelite Florence Welch.

Florence Welch is famous not only for her fabulous music. She is a poetess, a composer, and much more, just like the Pre-Raphaelite sisters! Her house, full of paintings, mysterious patterns, books, and outlandish trinkets, looks like the refuge of a romantic poetess. Likewise, her songs are magical canvases of love and darkness. Let us open this world of beauty for you today with the most look-a-like examples!

But first: Who are these Pre-Raphaelite brothers?

In the middle of the 19th century, the three mysterious letters started to appear on some English artworks: P.R.B. It was the Pre-Raphaelite Brotherhood. These young masters strongly disagreed with the conservative views of Victorian England. So they turned to biblical stories, Dante and Keats, English knightly ballads, and ancient Greek myths. As a result, the brotherhood created its own unique world.

The most prominent members of the Pre-Raphaelite movement were the poet and painter Dante Gabriel Rossetti, and the painters John Everett Millais, Ford Madox Brown, Edward Burne-Jones, William Morris, John William Waterhouse. The name “Pre-Raphaelites” was chosen to denote a spiritual kinship with the artists of the early Renaissance. These artists, “before Raphael” and Michelangelo, included Perugino, Fra Angelico and Giovanni Bellini. In the brothers’ opinion, Raphael was a pagan, who spoiled the sincere and pure in art. Therefore, Florence Welch, who even has a song named Pure Feeling, seems like a perfect reflection of the Pre-Raphaelite ideals.

The evidence: The Pre-Raphaelites would have loved Florence Welch

First example of Pre-Raphaelite Florence Welch could have been inspired by Mariana. John Everett Millais was one of the founders of the brotherhood. Mariana is one of his paintings based on a literary subject. This lady is the heroine of Shakespeare’s play Measure for Measure. Mariana is depicted in an uncomfortable position, conveying her fatigue from the long work on embroidery and the long wait for her fiancé Angelo. This work certainly reflects the artist’s desire for ultimate realism.

Ophelia is Millais’s most famous work. The model for the image of Shakespeare’s heroine was Elizabeth Siddal – the future wife of Dante Rossetti. Ophelia was the first of many paintings for which Siddal posed. For this work, she was immersed in a bath. Underneath, lamps heated the water. Siddal did not dare to interrupt the artist when the lamps went out. As a result, she caught a severe cold. The doctor prescribed her opium, which subsequently caused her premature death. This work was successfully exhibited in 1855 at the Exposition Universelle in Paris. Furthermore, it has become a personification of the Pre-Raphaelites’ art.

The life and work of Dante Gabriel Rossetti was greatly influenced by his marriage to Elizabeth Siddal, and her early death. Beata Beatrix is dedicated to her. Beatrix died from an opium overdose. Due to this, the bird in the picture, the Herald of Death, carries a poppy, an opium flower.

Rosetti often worked simultaneously as an artist and a poet. While creating paintings, he wrote accompanying poems. The legend of Lilith, the first wife of Adam, inspired Rosetti to create the poem Soul’s Beauty. In addition, he inscribed it on the frame of the Lady Lilith painting!

Here Venus appears as a fatal woman, whose sensual beauty is bewitching male destinies. Similarly, we can see Florence being just as enchanting all over the world!

Hylas is a character of ancient Greek mythology. The handsome Hylas was a favorite of Hercules, a squire, and a companion of the Argonauts. During the Argonauts’ long way home, the ship docked at the Karabiga Bay. And unsurprisingly, the nymphs abducted Hylas because of his incredible beauty. Can we really blame them?

In 1832, an English poet Alfred Tennyson published a poem Lady of Shallot about a damned girl living in a tower that she was forbidden to leave. So only in a huge mirror could she sometimes see what existed outside her dungeon. Once a shadow of the knight Lancelot flashed through it. So the girl, as if enchanted, decided to look at him in real life. But the lady’s journey to Camelot was not successful. Sadly, she reached its shores already dead.

Here the lady of Shallot is pictured during her journey to Camelot. We can see candles and a crucifix in the boat. The lady seems to look at them with despair. Why? Because candles symbolize life, and two of them are already blown out.

Still not sure about the potential of Pre-Raphaelite Florence Welch? Have a look at some more examples.

William Holman Hunt believed that the revival of art should be accompanied by a return to lost religious and moral ideals. As a result of his expressed preaching, friends called him “The Great Priest of the Pre-Raphaelites.”

Amaryllis creates an idyllic scene. But there is so much sadness hidden in it. Many Greek poets wrote about Amaryllis, a beautiful shepherdess. A shepherd boy calls for her, describing his longing for her love. He then sings about the cruelty of Eros, the god of love. And finally, he threatens that he will rush to be eaten by the wolves! But his suffering leaves Amaryllis indifferent. Oh, the cruel world!

In addition, Florence herself describes her style as:

Ophelia meets the Lady of Shalott