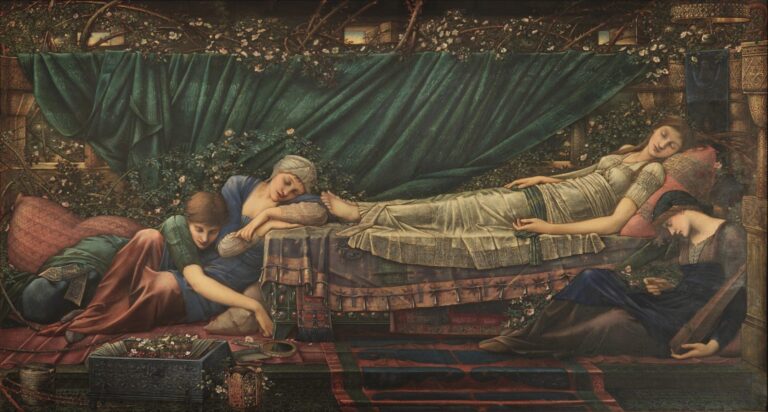 Tate Britain’s exhibition of over 150 works of Edward Burne-Jones brings us an exhaustive overview of his oeuvre. Like other Pre-Raphaelites Burne-Jones rejected the mechanisation of the Victorian era, turning to and cherishing the idealistic vision of the past. He initially wanted to be a church minister, but during his time in Oxford, he met William Morris, as their friendship developed both decided to become artists. His works remain very spiritual, aiming to transport us into an ideal world, of higher values.

The exhibition loosely follows the chronology of Burne-Jones creations. We start with his early works, exquisitely detailed drawings, gradual introduction of colour, all the way to its full development. In 1860 he joined Old Watercolour Society, and there are several works from that period. All of them with extremely vivid and deep colours, that seems to be going against the idea of watercolour, as if from early on Burne-Jones knew watercolours are not his ideal medium. Already at that stage, his style is very distinct visible both in the watercolours and stained glass. In 1870 Burne-Jones painted and exhibited Phyllis and Daemophoon, as it turned out his last painting as a member of Old Watercolour Society. He refused to change or cover the frontal nudity and decided to leave the society that tried to stifle his freedom like this.

The next room exhibits mostly drawings and studies, selected in a way allowing us to gain insight into Burne-Jones way of working. Especially that many of the drawings are preparatory works for paintings that we can see in the exhibition. He was an extremely skilled draughtsman, able to swiftly move from light, barely visible lines to strong and very ornamental works. Morris. We can clearly see inspirations with Michelangelo and Dürer, both amazing draughtsmen as well. The room also includes his drawings from the trips in Italy and some caricatures of himself and William Morriss.

Heart of the matter

The third room is the crux of the exhibition, containing the paintings from 1870 until his death in 1898. Burne-Jones always claimed that the seven years after he left the Old Watercolour Society were the happiest in his life. He was able to work without any pressure, he did not exhibit during that time.

In 1877 he showed some of his paintings in Grosvenor Gallery, the time was right, his style fully formed, and it was an instant success. The Beguiling of Merlin was one of the paintings that were appreciated by the public. The King Cophetua and the Beggar Maid was shown during his first exhibition on the continent, becoming a hit and cementing his reputation. Walking through the room we can trace the subtle changes of his style, from lively and deep colours, gradually to a bit quieter palette and more austere formal approach so visible in his last work Love Leading the Pilgrim.

His portraits are shown in a smaller room. Most of them are of Burne-Jones’ family and friends. They are a lot simpler and less busy than his other works. His full attention focused on the sitter, just as ours is. He keeps his palette consistent, avoiding the use of too many colours, the backgrounds are minimalistic, there are no distractions.

Burne-Jones versatility is proven once again in the next two rooms, devoted to his Perseus and The Legend of Briar Rose series. Perseus series consists of ten works in various techniques, we also get to see how the visions of the entire room changed as the work progressed.

The Legend of Briar Rose, on the other hand, is a complete and finished work, consisting of four paintings, exhibited in the same way they were supposed to be arranged in the room. The paintings are so detailed and full of ornament that they feel like tapestries, the colours are fantastically rich and everything together draws us into the fairy-tale mood.

More than a painter

The last room shows us Burne-Jones as a designer. As an artist he never distinguished between fine and applied art, he created both with equal enthusiasm and passion. Here we get to see the mesmerizing Pomona embroidery, The Holy Grail tapestries (loaned for the exhibition by Jimmy Page), the Graham Piano decorated by the artist and several other works. Compared to the hushed and dreamy calm of The Legend of Briar Rose room this one feels a bit rushed, or maybe it just prepares us to leave the exhibition and join back the hectic world.

The show is a great presentation of Burne-Jones work. It is organized in a way that draws us in, at the same time leaving enough time and space to allow the works to breathe and us to appreciate them. The idealized visions created by Burne-Jones insulate and transport us from the ugliness of the contemporary world and the grey, cold late autumn. This is exactly what he always strived to achieve.

Under 12s FREE (up to four per family adult)

Here you can find some more articles about Burne-Jones and Dante Gabriel Rossetti:

Women in Rossetti’s Life and Art