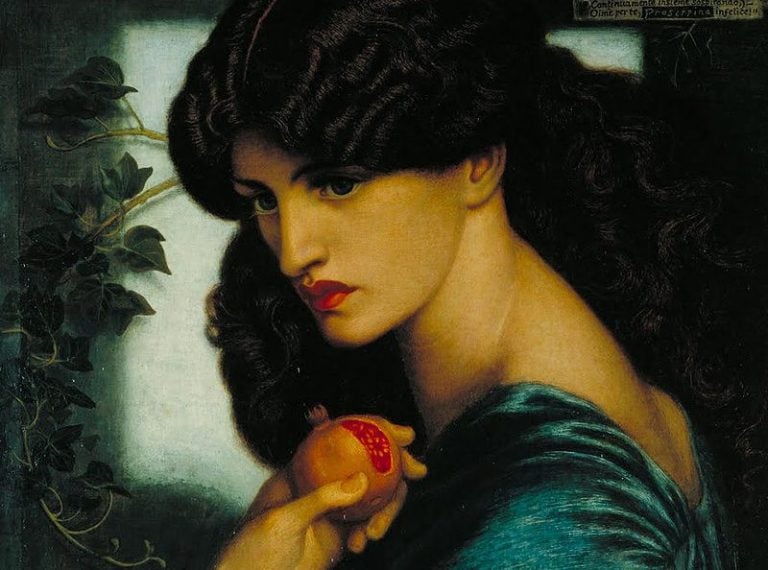 Works of the famous Pre-Raphaelite artist Dante Gabriel Rossetti often resonate with his personal experiences in life and love. Especially, the lush portraits of the larger-than-life goddesses were often inspired by the women who had the biggest significance to him: his auburn-haired wife, beautiful and blonde mistress, and the raven-haired muse. The latter provided both the meaning and the model for his painting depicting the legend of Proserpina.

The relationship between Jane Burden (1839-1914)  and Rossetti was rather a complicated one. She was noticed by Rossetti and Edward Burne-Jones in Oxford while they were working on their notorious Oxford Union mural in 1857. Starting off as a model for Rossetti, Jane later married William Morris (1834-1896) in 1859.

Even though there was a spark between her and Rossetti, the situation just wasn’t right for them: Rossetti was already involved with Elizabeth Siddal and Morris was a better provider for Jane. Coming from a working-class background, she would have been a servant girl. But with the help of her husband, she received proper education and aspired to the status of an upper-class lady. A few years after Siddal’s death, Jane and Rossetti rekindled their relationship, and she started sitting for the artist. Their affair wasn’t much of a secret, even to Jane’s husband.

Proserpina, or “Persephone” as Greeks would call her, is the queen of the underworld and the wife of Pluto, god and the king of the Underworld, also known as Hades. She was a daughter of Ceres (Demeter), the goddess of agriculture and abundance, and Jupiter, the ruler of all the gods, whose Greek counterpart would be Zeus. The goddess was abducted by Pluto, and her enraged mother Ceres cast a great famine on earth until her daughter returned.

Jupiter sent Mercury to the Underworld to bring back Proserpina. Unfortunately, she had eaten from a pomegranate while staying with Pluto, which is known as the “fruit of the dead.” Anyone who ate the fruit had to stay in the Underworld for the rest of their life. But an agreement was made so that only once in a year Pluto would release back Proserpina to her mother. Since then, Proserpina has become a goddess of spring, for the earth was revived after winter when she returned home from the underworld.

History of the Painting

In the years 1871–1877, when Jane regularly modeled for Rossetti, eight different paintings were made on the theme of Proserpina. He described his vision of the goddess in a letter:

The conception of the figure is connected with the legend by which Proserpina was permitted to spend one half the year in the upper light… Proserpina looks yearningly towards the momentary light which strikes into her shadowy palace, and the clinging ivy which strays over the wall further suggests the feeling of memory.

In many ways, this image of Proserpina summed up Rossetti’s view of Jane Morris as a goddess bound to a husband from whom she was only occasionally released to joy and light. The incense burner on the left denotes a goddess; the pomegranate, a Christian symbol of life after death, symbolizes her captivity.

As a token of love, Rossetti gifted jewelry from his own collection to Jane, such as the Burmese gold bracelet in The Beloved (1865-1866), the famous gold chain Jane wore whilst modeling for The Blue Silk Dress (1868), and others, which are now accessible to the public at V&A Museum in London.