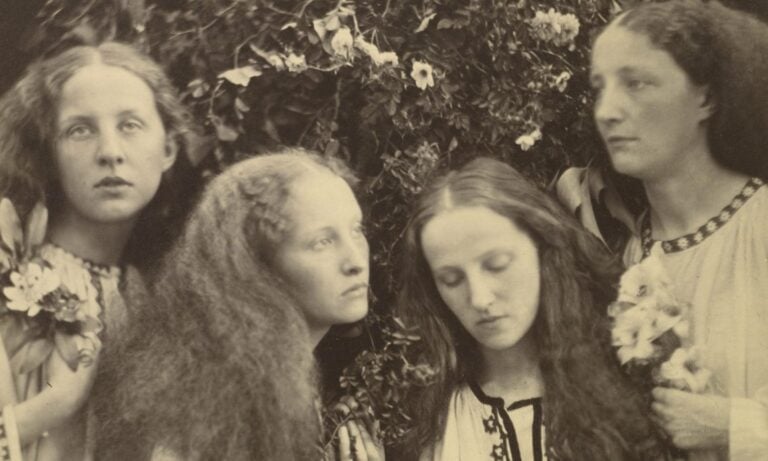 The English Victorian artist Julia Margaret Cameron (who was actually born in India and raised in France) was an irreplaceable representative of Pre-Raphaelite photography. With a careful look, Cameron produced portraits of deep sensitivity, marked by the drama she could manage for each scene. Unlike artists who started their careers very early, still close to adolescence, Julia Margaret Cameron began her artistic journey at age 48.

It all started when her daughter gave her a camera as a gift. Julia Margaret Cameron became a dedicated photographer and began to stage allegorical scenes referring to mythology, literature and history. This was a tendency that aligned well with the Pre-Raphaelite Brotherhood. In a few words, the movement advocated a return to nature and a way of making art that opposed the speed of industrialization. The Italian early-Renaissance painters who came before Raphael, such as Botticelli, inspired their style.

In the photograph above, for example, she reenacts a tragedy of William Shakespeare. He is one of the favorite authors of the Pre-Raphaelites.

The subject of this photograph is the division of King Lear’s kingdom between the daughters Regan and Goneril, and the exclusion of their sister Cordelia from the inheritance.

Cameron’s photographs delight in the meticulousness of detail. She recruited her friends and family, and even her servants, to be her models. One of Cameron’s nieces, Laura Gurney Troubridge, stated that her aunt was unpredictable and that they never quite knew what to expect from her photographs. However, they trusted her absolutely: when Cameron asked them to stand still, they did, even if it took hours. Since she was quite well-off and had a well-established network of contacts, her photographs feature many celebrities of her day, artists, and even scientists.

The theme of kings and queens was a recurring one in Cameron’s artworks. And, of course, as it was popular at the time, King Arthur was often present in her art. In the case of the two photographs above, Cameron received a commission from the poet Alfred Tennyson, who wrote the book Idylls of King, based on the legends of King Arthur. He asked her to do the photographic illustrations for the book. In response to the request, the artist produced a series of 25 photographs accompanying the poems. Cameron put a lot of effort into obtaining a good result. For example, she used fabric on top of the lens to create the “misty atmosphere“. She also paid a lot of attention to costumes.

In 1864, the same year she began photographing, Cameron became a member of the Photographic Society of London and Scotland. One year later, she made her first solo exhibition at the Victoria and Albert Museum (which at the time was still called the South Kensington Museum).

Cameron masterfully explored theatricality. With the help of elements from the theater, such as costumes and set, she constructed photographs that tell stories and allow the observer to immerse themselves into an imagined world. Look at this picture of King David. For a moment it is David himself that we see, not Sir Henry Taylor.

One of the most interesting things about Cameron’s work, however, is the way she preferred to keep blemishes and other “mistakes” in the final print. Critics at the time believed that it was the photographers’ obligation to eliminate any defects from their works. Cameron, however, did not care. The stains and scratches on the image were part of her aesthetic.

Julia Margaret Cameron’s active years took place over a decade and only declined when she moved with her family to Sri Lanka in 1875. She lacked materials to develop the photographs and also didn’t really fit into a new community. Despite this, Cameron left an impressive number of photographs, and she recorded all of them very carefully. It is especially due to her well-organized collection that we have access to her works today.

She died in 1879 and her biography was first published seven years later by Julia Prinsep Stephen. Interestingly, Stephen was Cameron’s niece and was the mother of the brilliant writer Virginia Woolf.