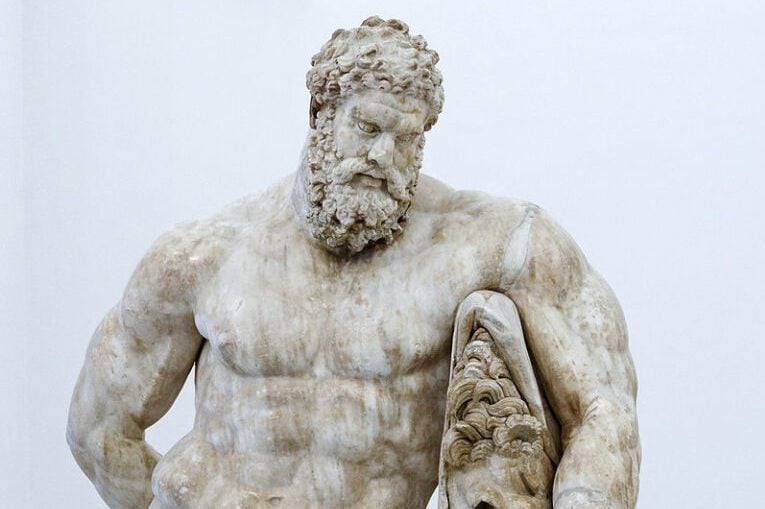 In Greek mythology, Herakles was a demigod and much admired heroic figure. The Romans called him Hercules (Herakles was his Greek name) and he was imported into their mythological story of the founding of Rome. In mythology, Hercules completed 12 labors, a series of grueling challenges, that entailed suffering and struggle. Whilst completing these ghastly feats, he encountered many Greek cities and landscapes. Although he was not the founder of any cities specifically, his presence in art, particularly sculpture, connects him to these places.

Hercules became a prominent force in ancient culture. He achieved immortality after his death because his labors were undertaken on behalf of mankind (the Greek for labors is athloi, from which we derive “athlete”). As athletic achievements were one of the highest honors in ancient Greece, Hercules was the ideal role model. His athleticism was emphasized during the twelve labors and he demonstrated both mental and physical prowess. Let’s take a look at 3 depictions of Hercules in ancient sculpture.

The Farnese Hercules is a Roman marble sculpture from 216 CE, which is signed on the base by the sculptor, Glykon. It is an enlarged copy of an earlier 4th century BCE Greek original that was cast in bronze by Lysippos but was unfortunately melted down. The sculpture was discovered at the Baths of Caracalla in Rome in 1540.

Hercules leans on his club, which is draped with the impenetrable skin of the Nemean lion that he slew during his first labor. Standing at an impressive 3.15 m, he displays another trophy behind his back – the legendary golden apples that he stole from the garden of Hesperides. This was one of Hercules’ last labors and his subdued figure and downcast eyes shows us that despite his heroic achievements, he is still very much a human hero. The viewer is drawn to his articulated physique, which is a feast for the eyes and emphasizes the sheer strength and courage that was fundamental to overcoming his labors.

This marble sculpture was created sometime between 69-96 CE during the Flavian Dynasty. It is believed to have been made as one of a pair with an older Hercules and restorations were made to it during the 17th century. Hercules stands in a position invented by the Greeks, which we now call contrapposto.

His body weight rests on one leg contrasted with the left leg, which is relaxed, and so the body is in a state of equilibrium. His defined facial structure, lack of beard, wide shoulders and soft musculature all represent his youthfulness and masculinity. We are reminded of Hercules’ bravery by the protective lion skin that rests effortlessly on his left arm and the club that he grips with his right hand.

It is believed that this marble sculpture was the Youthful Hercules’ counterpart and both works were used to decorate a large public bath. The arrangement of the lion’s fur over Hercules’ head like a hood is striking and the tied paws symbolize Hercules’ brute strength. He killed the Nemean lion with his own bare hands so the absence of arms on the sculpture due to restoration issues is ironic.

Hercules exudes confidence through his poised stance and rugged features, including a furrowed brow. Roman sculpture aspired towards realism, which we can also see in the defined muscles around the abdominal area and legs, but they are still exaggerated proportions to conform to a beautiful ideal figure that symbolized physical and moral excellence.