Masterpiece Story: Annunciation and Adoration of the Magi by Fra Angelico 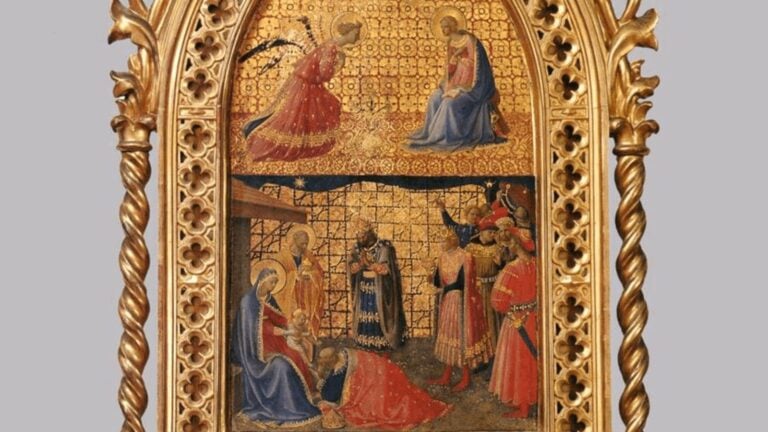 Annunciation and Adoration of the Magi by Fra Angelico is a masterpiece that can be viewed both as medieval and Renaissance. How so? Keep on reading to find that out.

Fra Angelico (born Guido di Pietro, c. 1395-1455) was a Dominican monk from Florence, Italy. He was active in a period in Italian art called Proto-Renaissance (ca. 1300–1400), which marked the transition from medieval to early Renaissance styles.

Although this panel looks at first like an altarpiece, it is actually a reliquary (container for religious relics). Fra Angelico made a total of four reliquary panels like this for the church of Santa Maria Novella in Florence. All four, three have been identified pretty firmly and the fourth tentatively, depict scenes from the life of the Virgin Mary.

The upper scene represents the Annunciation, in Christian iconography, it is the moment when the angel Gabriel appeared to Mary to tell her that she would be the mother of God. This event is celebrated by the church on March 25th. It’s a very common scene in European religious painting, and Fra Angelico himself painted it many times. His versions always include a kneeling Gabriel on the left and a pious-looking Mary seated on the right with her arms folded across her chest. The monochrome figure with a gilt halo at the very top of the composition is probably God the Father, sending down the rays of the Holy Spirit.

The lower scene depicts the Adoration of the Magi, in which three wise men (magi) or kings visited the newborn Jesus Christ to worship him and give him gifts of gold, frankincense, and myrrh. This event is celebrated on January 6th during the Epiphany, which is an important event in Christian countries. It is also commemorated in the popular Christmas carol We Three Kings. In this version, the Virgin Mary sits inside the manger with baby Jesus on her knee and Joseph standing behind her. The magi are easy to recognize through their crowns. One has placed his crown on the ground as he kneels at the Virgin’s feet, while the other two stand further back in prayer. A small crowd of other figures on the right has also come to see the baby Jesus.

Ten female saints, each identifiable through small name labels below their images, appear on the predella (lower ledge) of the reliquary panel. The Virgin and Child appear in the center.

One of the reliquary’s most impressive features is its elaborate wooden frame elaborately carved into a Gothic pointed arch with twisted columns, stylized vegetation, and quatrefoil (four-lobed) decorations. The relics it once contained were probably housed somewhere within this frame.