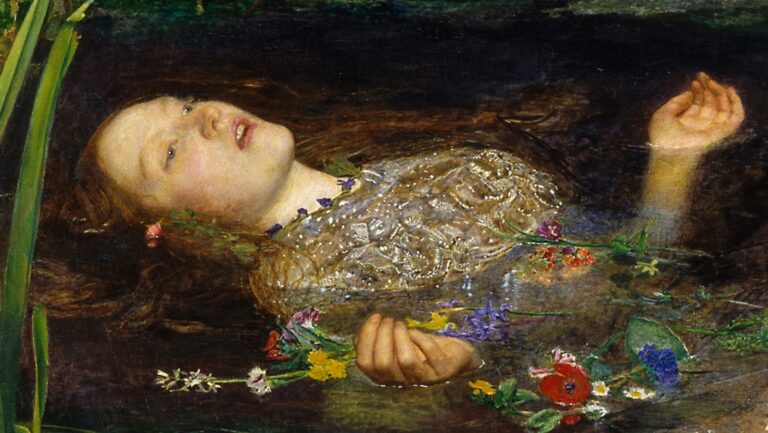 When down her weedy trophies and herself
Fell in the weeping brook. Her clothes spread wide;
And, mermaid-like, awhile they bore her up:
Which time she chanted snatches of old tunes;
As one incapable of her own distress,
Or like a creature native and indued
Unto that element: but long it could not be
Till that her garments, heavy with their drink,
Pull’d the poor wretch from her melodious lay
To muddy death.
― William Shakespeare, Hamlet

Ophelia’s death has been praised as one of the most poetically written death scenes in the history of literature. But the episode itself is not usually seen in theatres, as in Shakespeare’s text it exists only in Queen Gertrude’s description.

In the play, everything took place in Denmark, but of course, the landscape from the painting has come to be seen as quintessentially English. Ophelia was painted along the banks of the Hogsmill River in Surrey, near Tolworth, Greater London. The flowers shown floating on the river were chosen to correspond with Shakespeare’s description of Ophelia’s garland but they also carry a symbolic meaning. The prominent red poppy—not mentioned in Shakespeare’s description of the scene—represents sleep and death. Daisies represent innocence and pansies love in vain. The painting is known for its very close depiction of the detailed flora of the river.

Millais painted Ophelia in two separate stages: first, he painted the landscape, and then the figure of a girl. Ophelia was modeled by the future wife of Dante Gabriel Rossetti, artist and muse Elizabeth Siddal, then 19 years old. Millais had her lie fully clothed in a very fine silver embroidered dress bought by Millais from a second-hand shop for four pounds in a bathtub full of water in his studio in London. The problem was that everything happened in the middle of winter. The artist placed oil lamps under the tub to warm the water but was so intent on his work that he allowed them to go out. As a result, Siddal caught a severe cold, and her father later sent Millais a letter demanding £50 for medical expenses.

When Ophelia was first publicly exhibited at the Royal Academy in London in 1852, it received mixed reviews. A critic in The Times wrote that there must be something strangely perverse in an imagination which souses Ophelia in a weedy ditch, and robs the drowning struggle of that lovelorn maiden of all pathos and beauty, while a further review in the same newspaper said that Mr. Millais’s Ophelia in her pool … makes us think of a dairymaid in a frolic.

But later everything changed. Now the piece is admired as one of the most important works of the mid-nineteenth century for its beauty.