Masterpiece Story: The Last of England by Ford Madox Brown 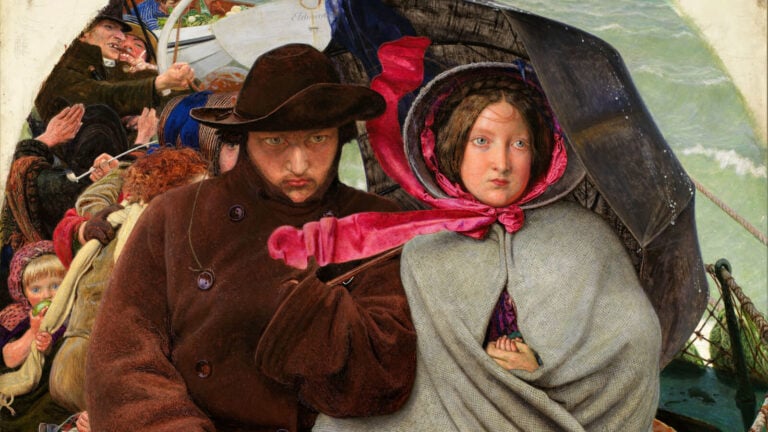 Out of the cold English air comes a man tired from a hard day’s work. He enters his home where his loving wife waits with a hot meal to warm his cold body. They sit in the dining room and blankly look at each other from across the dinner table. He looks fatigued and she looks concerned. They are struggling financially, and their lives are a meagre existence barely surviving from day to day. How did their circumstances become so dire? They are educated, and literate, but a lack of employment opportunities prevents them from fulfilling a better life. She knows they could do better if only he could find a better job, but there are hardly any jobs anywhere in England. After many months of consideration they decide to emigrate to Australia where more opportunities abound. Australia is a new land with new possibilities for a new life. Ford Madox Brown explores the psychological and emotional hardships faced by emigrants in The Last of England. Let us explore a Brown masterpiece. Let us explore an epic journey.

The England of the 1850s was the Victorian country we imagine through the works of Charles Dickens, Charlotte Brontë, and Elizabeth Gaskell. Queen Victoria was approaching 20 years on the throne, and with her the Industrial Revolution was in full force. Factories provided opportunities for great wealth, but also opportunities for great poverty. Some jobs were widely available, while some jobs were narrowly found. England witnessed a huge emigration of its population in the 1850s as people moved to Australia to seek a better life. England was no longer the land of promised prosperity everyone hoped for. Their young queen was growing into middle age, but it was England, not her that was having a mid-life crisis. Many English subjects decided they had enough of England’s economic woes and wanted to seek out a more independent life in Australia’s expansive outback. Brown’s The Last of England captures one family’s emigration as an example of their time.

The Last of England presents a family of three on a boat leaving England and heading out to sea. The White Cliffs of Dover can be seen in the upper right corner of the painting, and establishes the family as crossing the Strait of Dover. The husband and wife hold hands, as their son is wrapped in his mother’s shawl and holds his mother’s ungloved hand near her chest. Both parents look out to the viewer as if seeking reassurance that their decision to emigrate was correct and justified. The husband in his brown jacket looks broody and anxious, while the wife in her grey shawl looks serene and trusting. It is their eyes that imply their emotions and thoughts. Emigration is not an easy choice and tackles feelings of loss and fear, but also change and hope.

Emigration was a very personal theme for Ford Madox Brown. When he was creating The Last of England, he too was also considering to emigrate to seek a better life. Brown was not a successful artist in the 1850s, and the lure of a better future outside England was very tempting to him. Brown ultimately decided not to emigrate but the theme of emigration resonated with him. However, as if Brown was fulfilling his daydreams, he used himself as the model for the man in the foreground. His second wife, Emma, modeled for the wife in the painting too. Their son, Oliver, modeled for the proportions of the unseen child in the mother’s arms. Like Brown, the family is middle class, educated, and refined as symbolized through the books beneath the couple’s clasped hands. They know the sacrifices that await them in the primitive lands ahead.

To achieve the desired naturalistic details, Ford Madox Brown painted en plein air exposed to the elements. He and his wife willingness sat outdoors in cold weather to capture the color effects on the skin. The purple coloration on the man’s hands is a beautiful but brutal detail of such willingness. However, it is a reminder of the frigid weather surrounding this adventurous family. The cold wind blows from the right and lifts the mother’s bonnet ribbons and blows them across the father’s chest. The weather parallels their future. It will be stormy and volatile at first but will eventually become temperate and mild.

The entire painting is circular and hawks back to the Renaissance tondos of Michelangelo and Raphael. Like these Renaissance masters, Ford Madox Brown fuses solemnity with silliness. A little girl on the far left eats a green fruit and peers out to the viewer. A rough man above the little girl shakes his first as he sneers with his toothless smile and cigar. The little girl could represent innocence in the face of adversity. The man could represent ignorance. Viewing the collection of people behind the main characters one senses they represent the lower classes. They are illiterate, uneducated, and poor. They have less to lose by emigrating. There is poverty everywhere, but only prosperity where it can be found.

With their long-lasting and boring cabbages to provide nourishment, the family embrace an unknown but hopeful future. They leave England knowing they will probably never return. They will never see the White Cliffs, they will never see the Queen reign for another 40 years, and they will never be English again. They will soon become Australians and embrace what Australia has to offer. Will they face fortune or misfortune? Will they face culture or crudeness? Ford Madox Brown’s The Last of England explores the psychological and emotional hardships faced by emigrants. This is a Brown masterpiece. This is an epic journey.