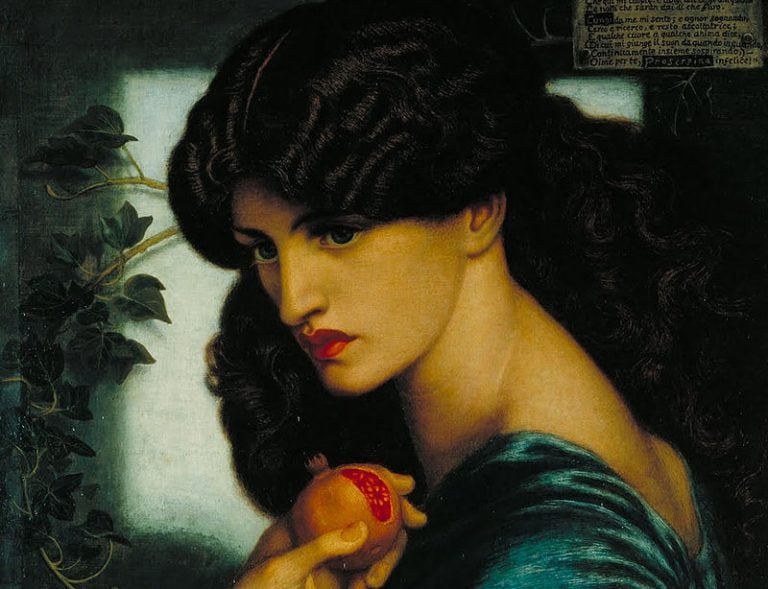 Jane Morris (1839-1914) was an English embroiderer and artists’ model who embodied the Pre-Raphaelite ideal of beauty. She was a model and muse to her husband William Morris and Dante Gabriel Rossetti.

The group sought a return to rich details, intense colors and complicated compositions of 15th century Italian art. They rejected what they termed the mechanical approach, first adopted by the Mannerist artists who inherited it from Raphael and Michelangelo. Additionally, the PRB particularly considered that the classical poses and elegant compositions of Raphael had a corrupting influence on the academic learning of the arts. Hence the name “Pre-Raphaelite”. The group accepted the concepts of painting history and mimesis, imitation of nature, as the central purpose of art.

As a result, the PRB gathered many great artists of that time. Also, it got together many beautiful women who posed for them. Their most famous muses are probably Elizabeth Siddal and, of course, Jane Morris.

Jane Burden was born in Oxford, as the daughter of a stableman and a laundress. In October 1857, the 17 years old Jane and her sister Elizabeth attended a performance of the Drury Lane Theatre Company in Oxford. Dante Gabriel Rossetti and Edward Burne-Jones, struck by her beauty, noticed Jane there. They were members of an art group, painting the Oxford Union murals, based on Arthurian tales. They asked her to model for them. Jane Morris’ destiny was set in motion. Her androgenic, but sensual look, with her square jawline, cushiony lips, deep-set grey eyes, and thick, wavy black hair, aroused something in people. Despite this, no one ever told her that she was beautiful.

Jane got engaged to one member of the group in 1858, the creative and enterprising William Morris.

Jane Morris sat mostly for Rossetti. She was also a model for William Morris, who painted her as the tragic Arthurian princess Iseult, during the first months of their friendship, and wrote on the finished canvas “I cannot paint you, but I love you.” We believe that La Belle Iseult is the only oil painting William Morris ever completed.

Jane Morris was Rossetti’s “stunner”, and through time, she became the love of his life. Also, she admitted, after William Morris’ death, that she never loved him, but she also never “gave herself” to Rossetti (he was quite the charmer, read about Rossetti’s women). It seems they were wildly attracted to each other at first sight. Morris first posed as the medieval Queen Guinevere for Rossetti. And after 1862, the year Elizabeth Siddal, Rossetti’s wife, died, they were, even more, gravitating toward each other.

Rossetti’s Proserpine appears to be the image of the culmination of his entwined artistic and erotic fixations. In the four-foot-tall portrait, Morris holds a split pomegranate. The redness of its flesh matches the color of her mouth. According to the myth, Proserpine tried a part of the forbidden fruit and was doomed to spend part of every year in the underworld. Yet, Morris’ usual unsmiling expression, seen in paintings and photographs alike, leaves neither regret nor concern. Instead, Rossetti captures the essence that made this reserved and intelligent woman so captivating as a model: the suggestion of a complicated, closely guarded inner life behind the saturnine composition of her features. Rossetti’s drawings and paintings of Jane are faithful portraitures.

And what about her spouse William? If he suffered from jealousy or insecurity, he mostly kept it very well to himself. He was always kind to Jane, who once praised him as “the most magnanimous, the least selfish of men.”

Jane Morris is one of the original designers and embroiderers of the Arts & Crafts Movement. In her early life, Morris received little education and would have probably become a laundress like her mother. But after the engagement, she was privately educated to become a gentleman’s wife. She was keen on reading and became proficient in French and Italian. Also, she became a great pianist with a strong background in classical music. Her manners and speech became refined so, later in life, she had no trouble moving in upper-class circles.

Morris moved, with her spouse, to the Red House in Bexleyheath one year after they got married. It was there that she developed her skills as an embroiderer working with her husband William Morris and daughter May Morris. They produced designs, embroidery, and textiles. Her work was translated onto stencils to use on wallpapers, ceilings, furniture, glassware, and metalware. In fact, she was much more than a muse, she created iconic textile designs and embroideries for Morris & Co. The whole PRB was contributing to the creativity of their work and to the company Morris & Co.

The End of Love

Morris finally ended the affair with Rossetti in 1876 because of the drastic decline in his mental health. He was having schizophrenic-like psychotic episodes and was addicted to chloral and whiskey. In 1872 he fell into a coma after drinking a bottle of laudanum. That left him partially paralyzed on his left side for several months. In her late years, Morris said that she loved him, but that she fell out of love when he began destroying himself. Yet he was, she reflected fondly, “unlike all other men.”

The couple’s professional relationship survived the end of their romance. After Morris broke things off, she continued to model occasionally for her former paramour, and they kept up an affectionate correspondence. Morris was far more to him than a mere visual spur to his creative and sensual impulses.

It was after Rossetti died that she became involved with another man: Wilfred Scawen Blunt. He was an adventurer and former diplomat whom she met in 1883. As a fan of Rossetti’s, he initially viewed seducing his idol’s muse as a challenge. But the affair became serious and lasted for around seven years. Morris’s biographer goes so far as to suggest that Blunt made Morris happier than she had ever been.

In a conclusion, the art critic Harry Quilter wrote about Rossetti and Morris:

There is probably no record of a painter whose personality grew to be so submerged in the form and face of one woman.