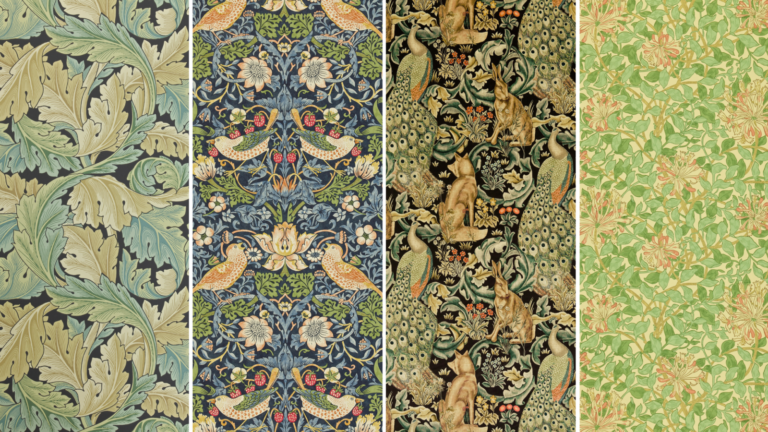 If you are stuck at home these days, you are probably looking for ways to spruce up your home. By extension, that means you are in dire need of some interior design inspiration. Now, more than ever, is the time to explore the iconic prints of the Arts and Crafts movement! To feast your eyes on its intricate prints while getting a sense of the movement’s history, just keep on reading. Here are the incredible prints of William Morris!

The Arts and Crafts movement started in Britain. However, it managed to spread quickly through mainland Europe and the U.S. from 1880 to about 1920. Its “father” is considered to be designer and social activist William Morris, who promoted anti-industrialism and socioeconomic reform. Art critic John Ruskin maintained that medieval art and architecture were a prime example of artistic prowess. This conviction served as a major inspiration for Morris.

To pay homage to medieval craftsmanship, William Morris employed traditional artistic methods. He also used folkloric decoration, reminiscent of the ornamentation of medieval objects. Consistent use of such elements is what eventually led to the trademark designs that we associate with the movement today.

For Morris, approaching a medieval level of purity and simplicity in craftsmanship required one essential element. That was the artisan’s personal involvement in both the design and the manufacturing stages of production. That is to say, the craftsman was not to surrender to the industrial model; he ought to take pride in his creations and in their originality. It is important to keep in mind the era during which the Arts and Crafts movement emerged. It was right after the end of the “official” industrial revolution period (1760-1860) that the movement gained momentum. William Morris was one of many who felt personally and professionally afflicted by it. He argued that

We could say that William Morris was one of the first and most innovative modern designers and decorators. His unique style aimed to merge all arts in the context of the home. A particular emphasis was placed on natural, simple lines reminiscent of a rural, bucolic life. This seamless blend came to life through the efforts of many trained architects involved in the movement. Their studies on the subject helped them design furniture and décor with the totality of the domestic interior in mind. The feeling of natural, instead of meretricious beauty, was preferred. Essentially; designs that would feel like a deep breath of fresh air in the woods, instead of a whiff in an artificially curated royal garden.

William Morris founded his own design company, Morris and Co., in 1861, when his ideas first gained a following. Given the great influence the Pre-Raphaelites had exerted on him, he enlisted the likes of Edward Burne-Jones and Dante Gabriel Rossetti in his design troupe.

Anything William Morris produced in his workshop was simple – excess was not to be found anywhere in nature, so neither was it to be found in his designs. The textiles and wallpaper prints of William Morris contain only the essential, bare beauty of nature; plants, flowers and leaves are the protagonists, with birds and fruits being the accessorizing elements, all in natural hues with the occasional pops of color.

While those were ideas that resonated with many, the Arts and Crafts movement’s eventual decline makes sense in its historical context. It came as a reaction to the reality of urbanization and technological innovation and, ultimately, succumbed to those powers. After World War I, it gave way to the more radical modernism. However, its core concepts that called for a just division of labor, a fairer society and a life of closer proximity to nature were all ideas that left their mark.

This brings us to today, and to the revival that the movement seems to be experiencing. The influence of the Arts and Crafts movement and of Morris himself are both ubiquitous; the 2014 exhibition the National Portrait Gallery dedicated to him, the interior design magazine articles referencing him and, of course, the evergeen thriving of Morris & Co., still up and running over 150 years after its founding, are only a few examples.

Morris & Co. is available through various retailers today and offers plenty of options for Arts and Crafts inspired home décor. The shop features the original trademark designs of the late artist on anything from fabrics to wallpapers to ceramics. Recently, the brand also collaborated with fast fashion retailer H&M (something Morris himself would have likely disapproved of) to transfer the designs from the realm of arts décoratifs to that of fashion. There is, additionally, an ongoing collaboration between Morris & Co. and a flower delivery company for the UK. Luxury fashion house Loewe also launched a dreamy clothing line featuring prints of William Morris. Needless to say, Morris and his artistic legacy are having an unexpected and far-reaching cultural moment.

It is clear that the brand Morris & Co. now associates itself with a certain type of lifestyle. Their goal is to incorporate a little more nature, beauty and simplicity into the modern living space and help transform an urban abode into something out of a rustic picture book. If you want that home decor inspiration for yourself, it’s as easy as browsing through some of the photos on their e-shop! You can attempt to recreate a similar vibe with what you already have at home or shop your favorite William Morris print (my personal favorite is Trellis, the first print Morris designed).

This soothing, persistent presence of nature is characteristic of the Arts and Crafts movement. It is also what makes its designs a go-to when decorating contemporary domestic interiors. The original surge of the movement was in retaliation to the industrial revolution that preceded it. Perhaps the increase in its pull nowadays is because of the highly digitalized and individualized times we are living in, combined with the harsh realities of modern city life. William Morris’ designs are a calming presence, creating a natural and complimentary flow with everything else in the home. They feel nostalgically anachronistic, like an item out of a grandma’s house, yet, at the same time, incredibly modern and necessary decoration for any contemporary house.

The interiors of our homes are the most vulnerable of places – it’s where our psyche goes to rest. In our current circumstances, being ordered to suddenly work from home shouldn’t make us feel restless. If anything, it should encourage us to look at art more, and consider interior design as an art in itself. Besides, there can be nothing more relaxing than reinventing the spaces we inhabit with designs that mimic nature. Remember this adage by William Morris: “Have nothing in your house that you do not know to be useful or believe to be beautiful.”

Anastasia has a BA in English Language and Literature and is working towards a MA in Art History. She loves learning about women artists and wants to right all of history's wrongs, one article at a time. Like her favorite artist, Keith Haring, she believes "art is for everybody".