3 Things You Might Not Know About the Birth of Venus 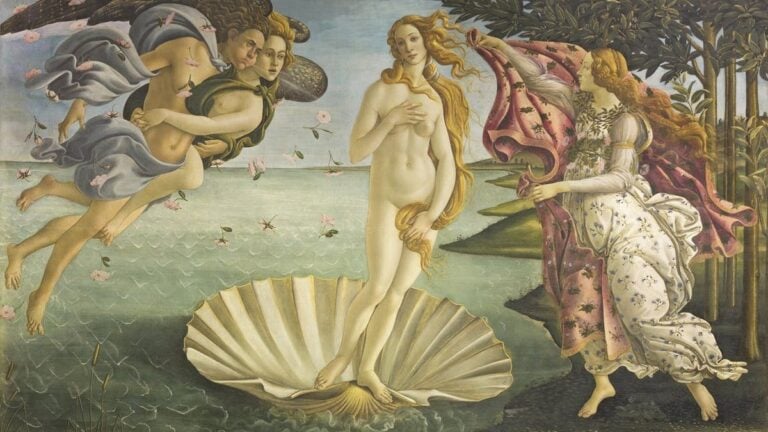 The Many Rebirths of Venus

It’s Valentines season, so what better thing to do than to meditate on the things you love, and of course, Venus definitively conquers all at this time of year. Art history’s love of Botticelli’s Birth of Venus is a long-term serious relationship but perhaps we can re-ignite your passion for the painting with some intriguing details you probably haven’t considered.

1. The image is not the birth of Venus.

Greco-Roman mythology was extremely in vogue during the Renaissance. The patrons of Botticelli, the Medici family, especially loved the mythologies and philosophies of the Greeks. For example, the idea that love and desire can inspire moral goodness. The Birth of Venus was most likely a commission for a bridal chamber, however, its name is a misnomer.

The story of the birth of Venus, told first in Hesiod (c. 8th-7th century BCE), is much gorier:

“Then the son from his ambush stretched forth his left hand and in his right took the great long sickle with jagged teeth, and swiftly lopped off his own father’s members and cast them away to fall behind him. And not vainly did they fall from his hand; for all the bloody drops … were swept away over the main a long time: and a white foam spread around them from the immortal flesh, and in it there grew a maiden … Her gods and men call Aphrodite, and the foam-born goddess and rich-crowned Cytherea.”

Botticelli is not depicting Venus foaming out from the blood of a castrated penis. Although some suggest that the bottom-left bulrushes are perhaps a phallic allusion to that origin particular. What he is showing is Venus arriving fully-formed on the shore of Cyprus, the island where her divinity was worshiped. A much more pleasant image to act as an aphrodisiac for newly-weds.

Obviously the central, serene nude is the deserving focus of our attention. Her nudity and long flowing hair are almost synonymous with idealized western female beauty. Those key details are not by chance, which is made clear by the actions of the figures on her either side. To the left we have personifications of the winds, blowing her to shore. On the right, we have a personification of Springtime holding out a garment to cover up the nakedness. That wind then is performing two important functions: making those auburn locks stream and prevent that pretty pink throw from wrapping itself around that divine form.

3. Botticelli’s picture is closer to religious imagery than you make think.

It is clear that Botticelli’s Venus is a sexually alluring representation of a female body. Her hand gestures suggest modesty but really just end up directing our eye-line. Instead of unpicking a discussion of the problematic male-gaze, which this painting may well represent, let’s discuss how Botticelli’s pagan image drew on overly religious images from the time.

Leonardo Da Vinci, who is well known for his religious and scientific artworks, was, in fact, a contemporary and acquaintance of Botticelli. Perhaps surprisingly, considering the subject matter, there are obvious similarities between The Birth of Venus and Da Vinci’s The Baptism of Christ. The central (almost) nude figure, the left-hand side pair, the surrounding dress, and even the right-hand side figure reaching out to the middle. There’s even what looks like a bulrush in the bottom left corner!