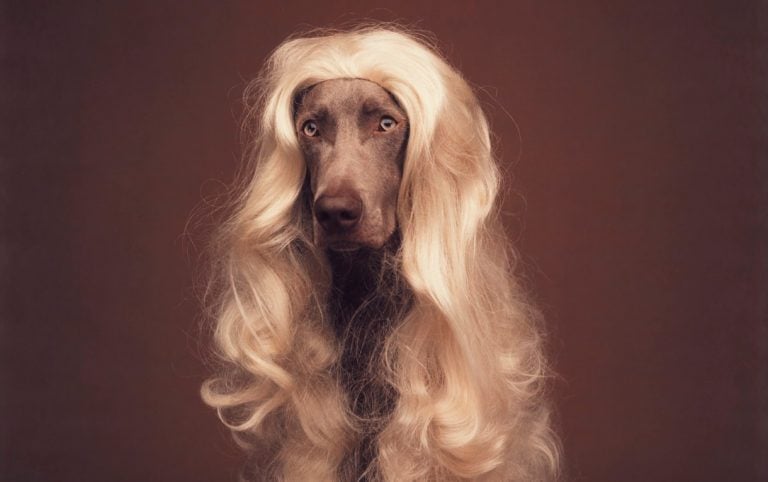 One of the phenomena that developed during the pandemic is that of “pandemic puppy“. If you took one we hope you are happy together! But if you have no way of taking a dog, join us in watching other people’s dogs. Dogs as a man’s best friends are also a source of endless inspiration for artists. Today we’d like to share with you some of the dogs in modern art.

Amadeo de Souza Cardoso was initially painting in the Impressionist style. Around 1910 under the influence of Cubism and Futurism, he became one of the first modern Portuguese painters. Cardoso died young of pneumonia and his work was forgotten. It was only rediscovered in 1952. In this painting, you can also see the influences of Art Nouveau in the elegant lines. This painting, very elegant in its simplicity, brings to us not only the physical form of a greyhound but also the idea of one. It is infused with the thin grace of the breed, making even the hares seem a bit clumsy.

Franz Marc was one of the key figures of German Expressionism. He loved animals and saw nature as the antidote to modern life. This peaceful painting is a portrait of his Siberian Shepherd, Russi. Her pale yellow fur gently contrasting with the snow, surrounded by trees and the blue shadows create a sense of natural harmony.

As peaceful as this painting looks its history was slightly more dramatic. Housed now in the Städel Museum it had to be acquired into the collection twice. The first time it was purchased from the painter’s widow in 1919. In 1937 the National Socialists removed it from the collection together with 26 other works as part of their confiscation of “degenerate art“. In 1961 the opportunity arose to acquire the work, from a private American collection, for the second time, at a significantly higher price. But it was worth it. In 2008 visitors to the Städel voted it their favorite painting.

Dachshunds apart from being extremely charming and funny, clearly are also inspiring. You will find many of them in art, not only modern. Giacomo Balla, as many other Futurists, found movement fascinating. Only this time the subject is a dachshund, not a machine. The inspiration for this painting were the chronophotographic studies of animals in motion. Throughout the years it received a mixed reception. Either being categorized as cliché and banal or being appreciated for its sense of humor and not taking itself too seriously.

The Hounds of the Baskervilles

Here again, we have dogs in motion, but the feeling those paintings evoke is very different from Balla’s cheerful dachshund. Francis Bacon’s dogs are full of anguish, threatening, and on the edge. They don’t’ cheerfully skip with their master. Rather they look ready to attack or run as if the world and life were too much for them.

Here once more, photography was an inspiration, this time Eadweard Muybridge’s time-lapse photographs of animals in motion. It is also possible that Bacon has seen Balla’s work when it was on loan to the Tate Gallery in London during the summer of 1952. Francis Bacon developed a fascination with animals, which, unlike human beings, respond to life in ways that are spontaneous, instinctual, and uninhibited. Consequently, he aimed to expose the raw emotions submerged beneath social civility through his work.

We all know Picasso loved women, but he also loved animals. Rarely could one find him without a dog. And he did make one of those dogs immortal. Lump was a dog of David Douglas Duncan, the author of the picture above. When he brought Lump to Picasso’s Cannes mansion all was lost. The dog remained and always received special treatment. Hence the plate, on which he was served his food at a table. Yet another example of a dachshund stealing an artist’s heart.

Dogs feature in many works of Keith Haring, but it is difficult to say what breed they are. We see them dancing, barking, and jumping. Often represented on two legs, as if a hybrid between the human and the animal element. Dancing dogs often referenced breakdancing directly. But Haring’s dogs also stood for Anubis, the Ancient Egyptian god of death, embalming and everything that has to do with the Underworld. In arts he is depicted with a jackals’ head.

Lucian Freud is often associated with his portraits, which show the sitter asleep and/or focus heavily on their flesh. He does not try to flatter his subjects, nor does he try to avoid the fact of their carnality. He seems fascinated by it. What is less known is that he too owned dogs, two whippets were immortalized in his work: Eli and Pluto.

You can see from the painting here that he gave them as much attention as his human sitters. They are usually asleep, as he preferred to work from life rather than photographs. And anyone who tried to draw a dog that is not asleep will attest that it is nearly impossible. He also manages to achieve this mix of carnality and personalization as with his human subjects. Dog’s feet lightly pink, their bellies vulnerable and their body trustingly leaning against the person. A perfect rendition of a tired but happy dog.

When the tiny, feisty Tiffany you can see in the picture above, met the legend of loup-garou and imagination of George Rodrigue the Blue Dog was born. Tiffany looks nowhere near as spooky as the Blue Dog, but she apparently had quite a lot of temper and fondness for eating furniture. The blue Dog also changed its mood over the years. Starting from a scary Louisiana legend, with roots in the werewolf myth, it gradually became more desolate and lost. It is a dog one wants to console and give him a treat, just to see the tail wagging again and smile in its eyes.

A Poodle and a Westie

Jeff Koons is often associated with scandalous art, but he surely knows what grabs the public’s eye. In his art, he routinely explores the border between art and advertising, marketing, and the entertainment industry. He also typically outsources the actual making of his pieces, providing only ideas for them.

Being so in tune with the public’s soul he could not miss the opportunity to add a few dogs to his oeuvre. He did it in a very playful way with his famous Balloon Dogs and in a bit more environmentally oriented way in Bilbao with Puppy. We know that the puppy is a West Highland terrier, but there is less clarity on the Balloon Dogs. I decided that for me they will be poodles, what do you think?

I also like how the puppy is always growing, both literally and figuratively. He is all cuteness (puppies and flowers – life rarely gets sweeter), but seriously over-scaled. Comforting like a huge teddy bear, but also a bit scary being so out of control. He also is high maintenance, as the flowers have to be replaced twice a year during a 9-day operation. It’s still less time than it takes to house-train a pandemic puppy.

David Hockney had not one but two dachshunds, Stanley and Boogie. They truly became his muses, way before the pandemic. Between 1994 and 1995 he painted more than 40 portraits of them. Then in 1998, some paintings in the series were published in the book Dog Days. The understanding of what it means to be a dog is similar to the one shown by Freud.

But the approach is very different, where Freud showed us the “dogginess” of the dog through its flesh, Hockney distills it to the essence. Visually the paintings are very different, but the feeling evoked by the animals painted are similar. Both the whippets and the dachshunds show us their vulnerable side, they like to cuddle and they do what dogs do best – sleep and lie around. I’m almost surprised they are awake in the photo with Hockney.

This collaboration between William Wegman and his Weimaraners lasted for decades. The first one was Man Ray, but he sadly died in 1982. Nonetheless, his presence in Wegman’s life marked the artist forever. In 1986 Fay Ray joined Wegman and later many of her offspring. They became his models bridging the gap between the canine and the human. Sometimes they seem merely patiently waiting for the photoshoot to be over, but other times their faces fill with emotions. Also since 1988 they expanded their career and ventured into the realm of television by featuring in many episodes of Sesame Street. They even promoted fashion, participating in a photoshoot for the limited-edition relaunch of MaxMara’s legendary 101801 coat in 2015.

As you can see dogs are an endless source of inspiration, not only in old dusty portraits but also in modern art. Also, we can observe how the attitude to dogs changed in the 20th century, from a mere pet or hunting accessory they became a subject in their own right. Infused with personality, they take center stage. As I’m sure, the pandemic puppies did for those of you who adopted them.