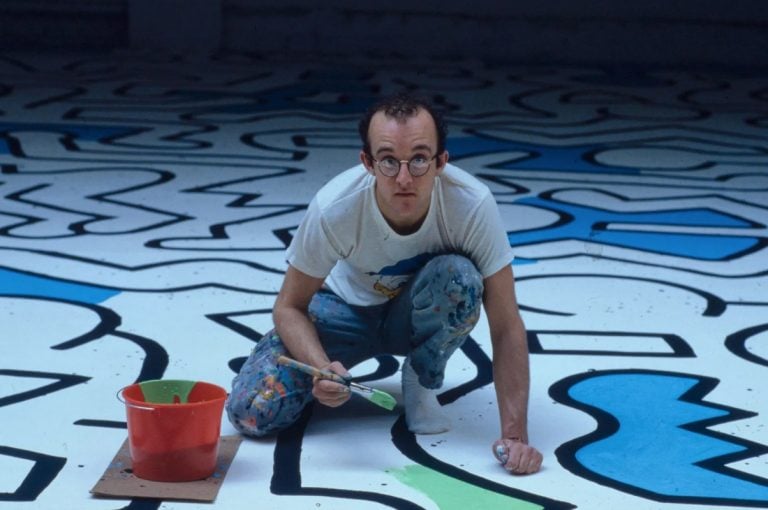 Today, we are celebrating the LGBTQ+ community by remembering Keith Haring, a brilliant artist whose vigorous and thoughtful works have inspired people all around the world to express love when facing hardship and to rethink the relationships between human life and nature.

On a lovely spring day in Reading, Pennsylvania, Keith Haring was born, just like one of his Radiant Baby drawings. Influenced by his engineer and amateur cartoonist father Allen Haring, Keith Haring decided to devote himself to the world of visual arts. His works always featured the American popular culture that his generation grew up with. Symbols like Mickey Mouse, disco club, LGBTQ+ love, a crawling baby, digital devices, and atoms are frequently referenced in his works. After moving to New York, Haring started to experiment with his famous “subway drawings” and finally held his first solo exhibition in 1981. In 1989, a year before his death, Haring established his non-for-profit foundation to raise funds for HIV/AIDS-related programs.

See, Hear and Speak: No More Hiding, Stepping Out!

You can always feel the vibrance of the three primary colors when immersed in the pop art world that Haring created. In explaining his preference for the color red Haring said:

Red is one of the strongest colors, it’s blood, it has a power with the eye.

His idea of capturing people’s attention through the use of red is demonstrated through the drawing below. It’s easy to quickly see the action of the red-figure followed by the movement of the other two colored figures. These figures seem to be covering their mouth, ears, and eyes respectively. Intriguingly, in the context of a public health emergency and homophobia, this piece of work is like a mirror that reflected people’s various reactions to the escalation in Covid-19 spread and LGBTQ+ peoples’ struggles during the lockdown. Some no longer speak for the community, some can’t hear depressing messages, yet more of us fear seeing what is happening.

In 1989, His work Silence = Death helped the SILENCE=DEATH Project (1987) promote its most iconic symbol in AIDS campaigns. A reference to Nazi oppression of LGBTQ people from the 1930s to 1940s, the pink triangle in the middle of the canvas symbolizes a positive recognition of people’s self-identity as well as a reminder of the persecution of gay people during the Holocaust.

In the year 2020, Haring’s voice seemed to linger in the painting. With more and more people coming out and fighting for equality and justice in the pink “spotlight”, people should also be brave enough to come out from the darkness and share such responsibilities in our society.

Social Media Age: Art for Love, Art for All

The biggest legacy of Keith Haring’s awareness campaigns is increased public engagement with art. Whatever background you come from, the art world is your oyster. Back in the 1980s, there weren’t Zoom meetings or Instagram stories but walkie-talkies, floppy disks, and Mario games. Although the world was not as well connected as it is now, Haring created affordable pop art shops for everyone to play with art. In many ways, these pop art shops seem to have become an embodiment of his mission statement. As Haring said, accessible art is “about participation on a big level.”

Perhaps Haring never imagined that social media platforms in the year 2020 would enable people to digitally collect and share his art, and even make it possible for people to reinterpret his works without temporal and spatial restrictions during the pandemic. Echoing Haring’s thoughts: — “if I only made paintings in a gallery, I would probably be frustrated”, young people attempt to break the boundary between art in cultural institutions and that of mundane life. It seems that Haring’s vision of giving people participatory power in art has also prompted museums to make a change while facing the lockdown.

During the Covid19 pandemic the Getty Museum has launched its quarantine challenge on Instagram: #gettymuseumchallenge. As a response, a user (@Marianadriana) teaming up with her family has recreated Haring’s sleeve design for the album Red Hot + Dance (1992). The son in the family dresses in pure green and holds a heart-shaped pillow which symbolizes love and caring for vulnerable groups. Life imitating art as such is a very inspiring continuation of Keith Haring’s motto:

(…) Art should be something that liberates the soul, provokes the imagination and encourages people to go further. It celebrates humanity instead of manipulating it.

Mother Earth and Knife are two major motifs in Keith Haring’s drawings. It is perhaps eerie that Haring in his 20 Drawings (1989) accurately “predicted” and criticized a series of problems we are currently coping with. It is a warning message for all of us in the 21st century.

Rapidly growing greed in human society has inevitably led to environmental degradation. In the name of “love” and “protection”, humans hunt and exploit animals to satisfy the incessant need for food. This results in a domino effect in the ecological circle: as we demand more and more from nature, we are gradually damaging human sustainability for posterity. Today, it becomes clear that all human beings are living under an environmental sword of Damocles hung by ourselves.

The 1980s was once marked as the decade of the HIV/AIDS epidemic. Today, our world is troubled by new infectious diseases and subsequent economic uncertainty. However, the younger generation 40 years ago and millennial groups today share many similarities. They are inspired by Haring’s creativity and passion, as well as his spirit of overcoming health issues and social injustice with art. Therefore, let’s unite through Keith Haring’s art!

Emily Ziron Lyu is a Young Collective Producer at Tate Liverpool. She is also a member of The Oriental Ceramic Society (UK), doing research on the patterns taken from Yuan-Ming-Qing Chinese ceramics. She is now working on her new art project Atom in Flux (2019). Follow her Instagram and Twitter.