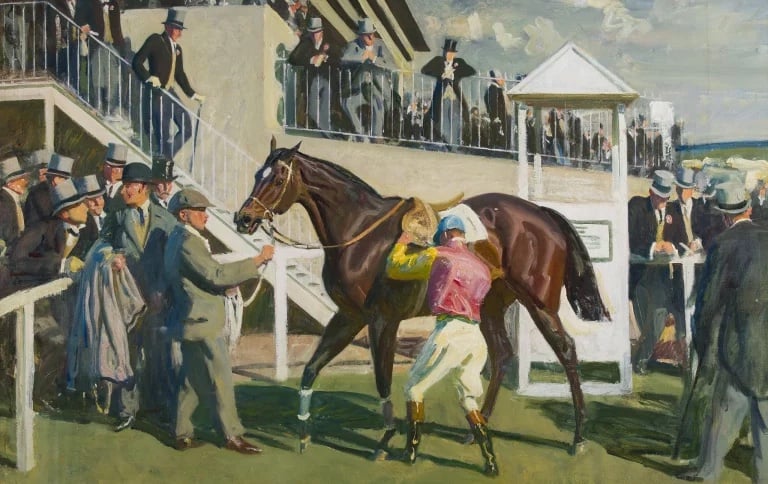 Alfred Munnings was the leading sporting artist during the first half of the 20th century. His paintings encompass a range of sporting themes: horses and riders at fox hunts, horses and jockeys as they prepare for races, rural genre scenes, and portraits of avid sportsmen and women. Though the subject matter is traditional, the method in which it was executed is decidedly more contemporary: loose brushstrokes, a vibrant color palette, and painted out of doors to capture the effects of sunlight.

What Is Sporting Art?

“Sporting art” refers to traditional turf and field sports. Those who specialize in depicting scenes like fox hunts, horse races, and fly fishing are therefore, aptly, called “sporting artists.” Given the proliferation of animals within these scenes, there is often an overlap between sporting artists and animal artists, who have never quite been given their due. Depending on whose artistic hierarchy you look at, animal art was either not included at all or listed just above the least-respected genre: still-life. We all know now that this hierarchy is meaningless because, as we have seen throughout DailyArt Magazine, still-life artists produce beautiful and highly detailed works of art.

George Stubbs was perhaps one of the most famous animal artists is from the 18th century. During his lifetime, Stubbs (1724–1806) was renowned for his animal portraits, including the famous Whistlejacket. Additionally, he wrote and illustrated The Anatomy of the Horse (1766) which included detailed analysis on, well, the anatomy of the horse. He even dissected horse cadavers to produce comprehensive drawings of a horse’s skeleton and musculature. Furthermore, he ended up completing all the engravings for the book as well, since most engravers found it beyond their technical skill.

Stubbs influenced generations of subsequent artists, including Alfred Munnings (1878–1959). He often referred to The Anatomy of the Horse for his own work and was known to scale furniture in order to get up close and personal to inspect Stubbs’ paintings.

Though Munnings was very much a traditionalist, no doubt believing that transportation should probably have stopped with the horse and carriage, his artistic style aligned with modern Impressionists. He lived during a transitional time when England was moving out of the Victorian era and into the Edwardian. This was a time of major technological development and achievements as the world was moving quickly into the 20th century.

Below are ten enlightening facts about the artist:

1. The Artist and Nature

Munnings was born in 1878 and raised in East Anglia, England. Growing up in the countryside instilled in him a lifelong love of nature and the outdoors. He believed nature was perfect and to completely distort it, à la Modern art like Picasso, was disgraceful.

He began drawing as a young boy, with horses being one of his favorite things to sketch. His parents recognized his talent and, at the age of 14, he began an apprenticeship at Page Brothers, a lithography firm, where he remained for six years.

When Munnings was 20 years old, he helped a puppy caught in bramble and a tree branch struck him in his right eye. He was in the hospital for six months and never regained his sight. He thus had to learn to paint with monocular vision.

Around 1911, Munnings traveled to Cornwall. The Lamorna Artists Colony, led by Stanhope Forbes, was based there and even though he never officially joined the group, he socialized and painted with them. Some of the other artists included Dame Laura Knight and her husband Harold Knight. Munnings was an outgoing personality, known to recite excerpts from literature and Edgar Allan Poe’s poems at the pub.

As a devotee of painting en plein air, he painted outdoors whenever possible, enjoying the colors created by the sun and shadows. Sometimes a white horse isn’t pure white – on a bright day, there might be a green hue to it. Munnings captured these nuances with his broad brushstrokes.

At Lamorna, Munnings met his first wife, Florence Carter-Wood, who was there to paint along with her brother Joseph. Supposedly, she was as reserved as Munnings was outgoing. On their wedding night, for reasons unknown, Florence attempted to take her own life but was revived. The following year, in 1914, she took another overdose and, unfortunately, help did not arrive in time. Munnings was devastated by the loss and never spoke about her again. In 1950, he published his three-volume memoir and never once mentioned Florence.

In 1908, Munnings hired as a model a young (and apparently short) local named Fountain “Shrimp” Page. For several summers, Shrimp, Munnings, and his groom took a caravan of horses and roamed the countryside looking for prime locations to paint. Shrimp is featured in a series of paintings that are highly evocative for their ability to appeal to the senses. For instance, in Shrimp with Ponies in the Ringland Hills near Norwich (1911), we can feel the humidity as the young man lounges in the grass.

8. Munnings as a War Artist

Due to his partial blindness, Munnings was ineligible to fight during World War I. Instead, he served in the Canadian Cavalry Brigade as their official war artist, capturing not only the harrowing events of combat but also moments of humanity, such as a soldier caring for his horse and soldiers with their horses at rest.

The Canadian War Museum in Ottawa is hosting an exhibition Munnings – The War Years, opening in November 2022. It will be there until February 2023.

In 1919, Violet McBride was competing at the Richmond Horse Show when she met the artist. They married the following year. As Munnings continued his successful career as an artist, Lady Violet became his business manager, handling commissions and their finances. This allowed Munnings the freedom to work and they were able to purchase the idyllic Castle House in Dedham.

Incredibly for a sporting artist, Munnings was elected president of the Royal Academy in 1944. It proved to be a big year for him as he was also knighted. He was raised to Knight Commander of the Royal Victorian Order two years later.

Munnings died in 1959 and his ashes were interned in London’s St. Paul’s Cathedral. Lady Violet turned Castle House into a museum. The Munnings Museum is home to his artwork and archives. Their house and furniture remains as it was when they lived there and his studio in the garden is also open to visitors.

The novel Summer in February by Jonathan Smith was published in 1995. It is loosely based on a love triangle between Florence, Munnings, and Gilbert Evans, another friend of the Lamorna artists. It was adapted into a movie in 2013 starring Emily Browning, Dominic Cooper, and Dan Stevens.

One of the phenomena that developed during the pandemic is that of “pandemic puppy“. If you took one we hope you are happy together! But...