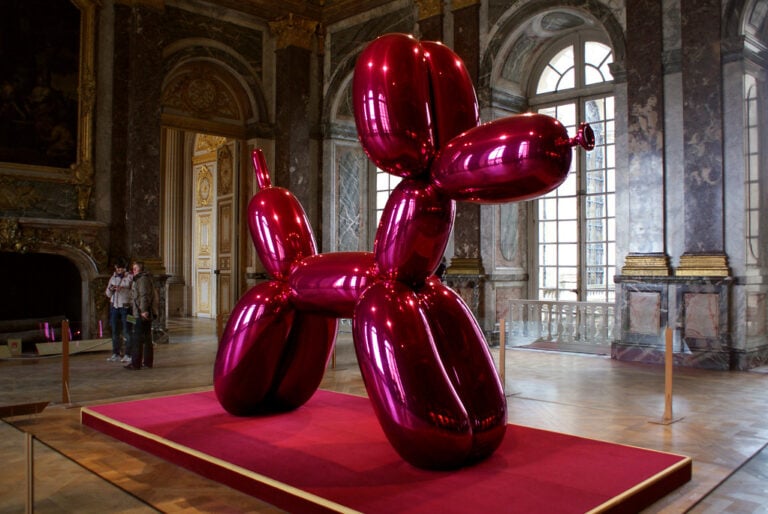 What do Jeff Koons, Jay Z, Christie’s, and clowns have in common? Balloon dogs! Read how an artwork looking like a huge toy hit $58.4M at a Christie’s auction, becoming one of the most expensive artworks by a living artist ever sold at an auction.

Jeff Koons (b. 1955) is an artist who blends the themes and methods of Pop, Conceptual, and appropriation art with craft-making and popular culture to create his own unique iconography that is often controversial and always engaging. His work explores contemporary obsessions with sex and desire, race, gender, celebrity, media, commerce, and fame. A self-proclaimed “idea man,” Koons hires artisans and technicians to make the actual works. Jeff Koons’ most iconic works are his balloon dogs.

His works have sold for substantial sums, including at least one world record auction price for a work by a living artist. On November 12, 2013, Koons’s Balloon Dog (Orange) sold at Christie’s Post-War and Contemporary Art Evening Sale in New York City for $58.4 million (above its high $55 million estimate), becoming the most expensive artwork by a living artist sold at auction for five years. Koons beat his own record in 2019, selling his stainless steel Rabbit for $91.1 million at another Christie’s auction.

There are five of Jeff Koons’s Balloon Dogs. They measure 307.3 × 363.2 × 114.3 cm. Each work is made from precision engineered, mirror-polished, stainless steel and finished with a translucent coating of either blue, magenta, orange, red, or yellow.

The stainless steel orange sculpture with transparent color coating is one of the first balloon dogs. It looks like the kind of souvenir clowns make at birthday parties. Other pups have been on display around the world in red, green, and blue — not to mention a shiny pink one that made it to Versailles in 2008.

I’ve always enjoyed balloon animals because they’re like us. We’re balloons. You take a breath and you inhale, it’s an optimism. You exhale, and it’s kind of a symbol of death.

Balloon Dogs are not the only balloon sculptures by Koons. Below you can see other noteworthy Koons balloon animal sculptures from recent years.

This shocking pink Balloon Dog, photographed on September 9, 2008 at the Château de Versailles, sparked controversy as some visitors said the work was crude and too modern for Louis XIV’s former palace.

The Balloon Dog has become a symbol of pop culture. Jay Z apparently is a huge fan of Koons, once rapping about them in his 2013 song Picasso Baby:

Oh what a feeling, f*** it I want a billion
Jeff Koons balloons, I just wanna blow up

He also performed with a copy of the Balloon Dog during his concerts in 2017.