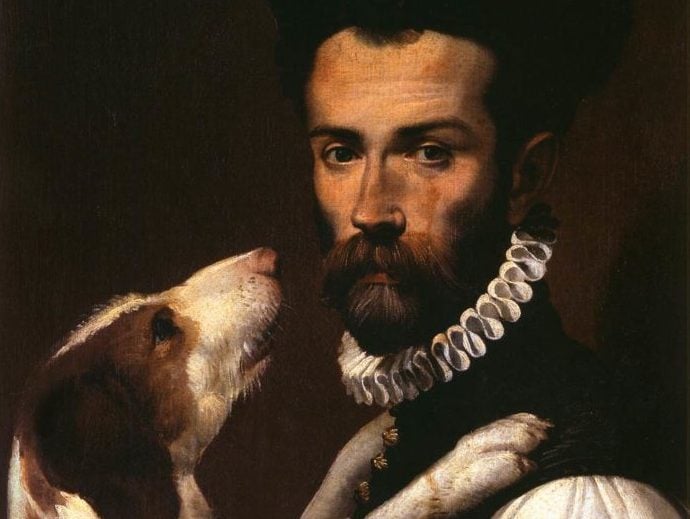 Bartolomeo Passarotti, Portrait of a Man with a Dog, 1585, Musei Capitolini, Rome, Italy.

The title sentence is a charming English euphemism, usually used to apologize for one’s imminent departure or absence—generally to conceal one’s true purpose, such as going to use the toilet or going to buy a drink. We, however, will not dwell on that meaning, instead, we will look at a few paintings of men and their dogs in this article, to understand the various relationships that exist between the man and a dog.

Jean-Léon Gérôme was an academic painter at the peak of his career when Impressionism was developing. However, despite his extremely realistic and theatrical style rooted in tradition and idealized image of Ancient Rome, Greece and the East, he also appreciated the invention of photography and its influence on art.

“Photography is an art. It forces artists to discard their old routine and forget their old formulas. It has opened our eyes and forced us to see that which previously we have not seen; a great and inexpressible service for Art. It is thanks to photography that Truth has finally come out of her well. She will never go back.”

In this painting, we see the Greek philosopher Diogenes in his clay pot lighting a lamp in the middle of the day to ‘search for an honest man.’ Dogs surround him, watching attentively like students. Although according to Diogenes it is humans who should study and learn from dogs. The term ‘cynic’ derives from the Greek word for ‘dog-like’, an idea that Diogenes completely agreed with.

For many years Anthony van Dyck was a court painter for King Charles I, an avid art collector. His style evolved while he was in England, becoming more relaxed and intimate while retaining the authority of the sitter. Van Dyck’s portraits revolutionized portrait painting in England and continued to influence it for the decades to come.

In this painting, we see Charles I’s five children. They combine the childish innocence with the aura of authority expected of royalty; especially the older two, looking straight at us with serious, but still curious faces. They seem to be supported by their elegant clothes that make them look older than they are. In the heart of the composition, we can also see a giant dog sitting patiently and providing both physical and moral support to young Charles II, who leans upon it. It is clear that the dog has spent plenty of time with the children, protecting them, but also going along with their whims.

José Moreno Carbonero was a Spanish painter and decorator. A prominent member of the Málaga School of Painting, he is considered one of the last great history painters of the 19th century. In 1875 he traveled to Paris thanks to a scholarship granted by the local government of Málaga. In Paris, he joined the workshop of the painter Jean-Léon Gérôme, who we just encountered.

The eldest son of King Juan II of Aragon and Queen Blanca of Navarre, Carlos de Viana was heir to both thrones, yet his father disowned him in favor of his other son, Fernando “The Catholic.” Because of his growing popularity in Catalonia, Fernando forced him to abandon public life, a resigned Carlos dedicates himself to reading and studying at the library of the Neapolitan convent where he took refuge, accompanied only by a dog. The sleeping dog brings calm to the picture. Prince Carlos still seems grief-stricken, but he is not alone and as soon as the dog wakes up it will surely distract him from his melancholic brooding.

Bartolomeo Passarotti was an Italian painter during the Mannerist period. He worked mainly in his native Bologna. The Portrait of a Man with a Dog shows us the pair almost involved in a conversation, that we dared to rudely interrupt. The affection between the dog and the owner is clearly presented and surely mutual.

Gustave Courbet, on the other hand, clearly focuses on making an impression, not on his companion. Yet, there is a connection between the two, the dog sitting straight and looking at us, there seems to be a grain of truth in the notion of ‘dogs looking like their owners.’ In this case, the dog just seems a tiny bit less arrogant.