Everything You Must Know About the Manifesto of Futurism 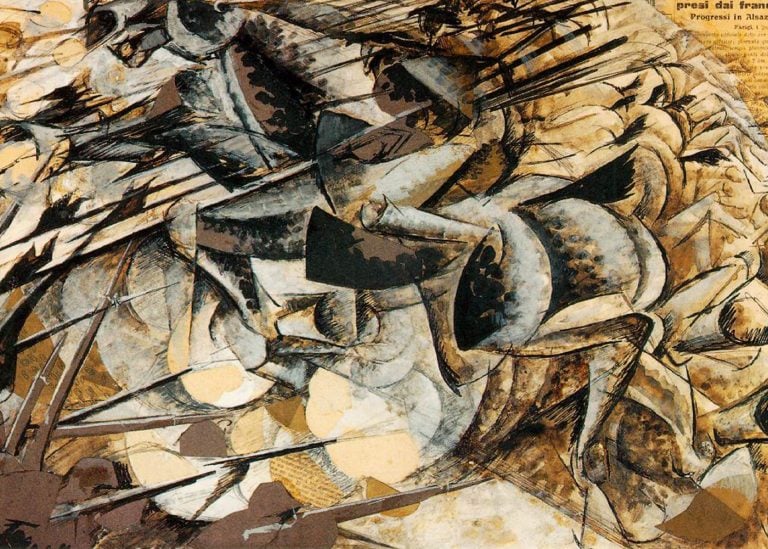 Futurism is one of those avant-garde movements of the 20th century which left its mark on modern art. The center of interest of Futurists was the modern industrial city with all its new features like speed, technology, youth, and violence. They painted often new inventions, like cars or airplanes, and also conceived their own manifest, the Manifesto of Futurism.

Here is everything you must know about the Manifesto of Futurism:

Filippo Tommaso Marinetti wasn’t an artist – he was a poet. He wrote the Manifesto in 1908 and it first appeared as a preface to a volume of his poems, published in Milan in January 1909. It was also published in the Italian newspaper Gazzetta dell’Emilia in Bologna on February 5, 1909, then in French, as Manifeste du futurisme in the newspaper Le Figaro on February 20, 1909.

2. Futurists fought the past

For Futurists, 19th century Italy was the synonym for everything horrible. They wanted Italy to be up to date with the growing importance of industry, to have the power to participate in new experiences, and to find the superior essence of progress in its major symbols: the car and its speed.

Futurists wanted literature to be a part of the progress. They wished it could adapt to it and become a tool for manifesting it.

Man is reacting against the potentially overwhelming strength of progress, and shouts out his centrality. Man will use speed, not the opposite.

5. For them, poetry was connected to aggression

In the Manifesto of Futurism, poetry is seen as a tool to help men submit their souls to be a part of the new reality (art. 6 and 7), indicating a new concept of beauty that will refer to the human instinct of aggression.

6. They demanded purification by war

In the Manifesto, war is dangerously defined as something necessary for the health of the human spirit, a purification that allows and benefits idealism. Their explicit glorification of war and its “hygienic” properties influenced the ideology of fascism. The Futurist Party, for example, became part of the Combatto Fascisti before the latter’s assuming power. Marinetti was very active in fascist politics before he finally withdrew.

7. They wanted to… burn museums!

We want to demolish museums and libraries, fight morality, feminism and all opportunist and utilitarian cowardice.

8. The Manifesto says little about art itself

The founding Manifesto did not contain a positive artistic program, which the Futurists attempted to create in their subsequent Technical Manifesto of Futurist Painting (1914). This committed them to a “universal dynamism”, which was to be directly represented in painting.

Here, you can read the whole Manifesto of Futurism – although I really like Futurism in an aesthetic way, some of these points sound like a real nightmare.

1. We intend to sing the love of danger, the habit of energy, and fearlessness.

2. Courage, audacity, and revolt will be essential elements of our poetry.

3. Up to now, literature has exalted a pensive immobility, ecstasy, and sleep. We intend to exalt aggressive action, a feverish insomnia, the racer’s stride, the mortal leap, the punch, and the slap.

4. We affirm that the world’s magnificence has been enriched by a new beauty: the beauty of speed. A racing car whose hood is adorned with great pipes, like serpents of explosive breath – a roaring car that seems to ride on grapeshot is more beautiful than the Victory of Samothrace.

5. We want to hymn the man at the wheel, who hurls the lance of his spirit across the Earth, along the circle of its orbit.

6. The poet must spend himself with ardor, splendor, and generosity, to swell the enthusiastic fervor of the primordial elements.

7. Except in struggle, there is no more beauty. No work without an aggressive character can be a masterpiece. Poetry must be conceived as a violent attack on unknown forces, to reduce and prostrate them before man.

8. We stand on the last promontory of the centuries!… Why should we look back, when what we want is to break down the mysterious doors of the Impossible? Time and Space died yesterday. We already live in the absolute, because we have created eternal, omnipresent speed.

9. We will glorify war – the world’s only hygiene – militarism, patriotism, the destructive gesture of freedom-bringers, beautiful ideas worth dying for, and scorn for woman.

10. We will destroy the museums, libraries, academies of every kind will fight moralism, feminism, every opportunistic or utilitarian cowardice.

11. We will sing of great crowds excited by work, by pleasure, and by riot; we will sing of the multicolored, polyphonic tides of revolution in the modern capitals; we will sing of the vibrant nightly fervor of arsenals and shipyards blazing with violent electric moons; greedy railway stations that devour smoke-plumed serpents; factories hung on clouds by the crooked lines of their smoke; bridges that stride the rivers like giant gymnasts, flashing in the sun with a glitter of knives; adventurous steamers that sniff the horizon; deep-chested locomotives whose wheels paw the tracks like the hooves of enormous steel horses bridled by tubing; and the sleek flight of planes whose propellers chatter in the wind like banners and seem to cheer like an enthusiastic crowd.