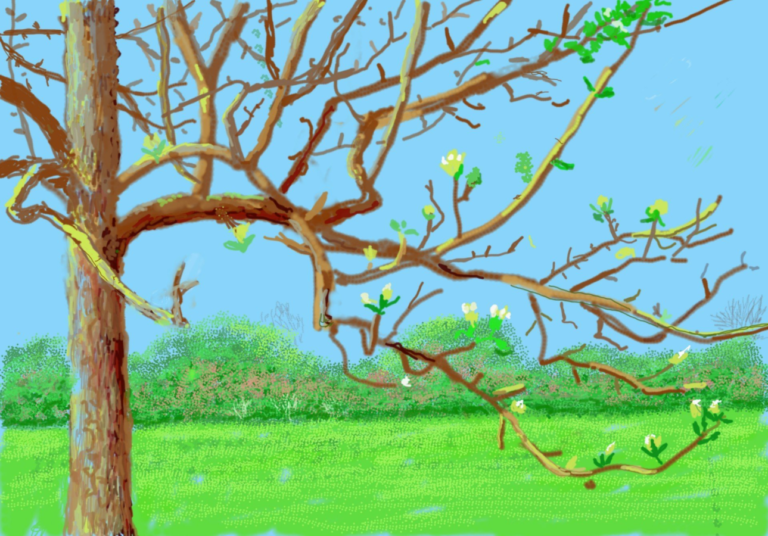 David Hockney is in lock-down in Normandy and spends most days in the garden, drawing the spring awakening on his iPad. In a series of letters written to the BBC correspondent he shares how he feels his images can be a respite from quarantine.

“I went on drawing the winter trees that eventually burst into blossom. This is the stage we are in right now. Meanwhile the virus is going mad, and many people said my drawings were a great respite from what was going on.”

Interview with the BBC Arts Editior, Will Gompertz.

You can see the exclusive pictures, and even an animated painting, that Hockney shared in this BBC article.

“The only real things in life are food and love in that order, just like our little dog ruby. I really believe this and the source of art is love.”

Interview with the BBC Arts Editior, Will Gompertz.

Hockney (b. 1937) is one of Britain’s most influential artists. He has spent most of his life living between California and England and was an important contributor to the pop art movement of the 1960s.

One of his most famous images is A Bigger Splash, which, like the iPad pictures, is a perfect example of how Hockey likes to create pleasing and relaxing images.

Although best known for his painting he was also made prints, photo-collages (for example Pearblossom Highway), and even stage designs for the theater. You can read more about Hockney’s photography in this Daily Art article.

“A child of the screen”

Hockney’s digital work, such as The Four Seasons, Woldgate Woods, has recently adapted to the iPad. He has even been known to make art using his iPhone.

Hockney a is a child of a screen in a way. Since the beginning he let photographic and cimematic pictures slip into his visual world. No wonder he uses touchscreens now.

(Not) an iPad artist

In 2018, the eighty-one year old Hockney presented a stained glass window at Westminster Abbey for the Queen of England – designed on his iPad. Read more about the theory behind Hockney’s use of the iPad here.

“I like looking at things, and there’s a lot of ways to look at things …. I’m not an iPad artist. It’s just a medium. But I am aware of the revolutionary aspects of it, and it’s implications.”

Hockney in interview with Anders Kold at the Louisiana Museum of Modern Art, 2011.

You can read more about Hockney’s world of pictures and its relationship to Art History in this Tate Etc article (2017) and this Daily Art article.