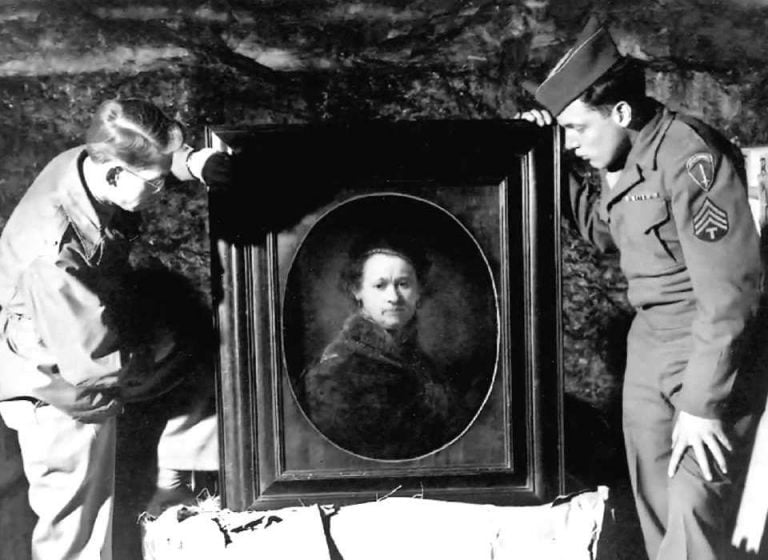 Art theft and looting occurred on a massive scale during World War II. It all started with Adolf Hitler’s unsuccessful career as an artist. He was denied admission to the Vienna Academy of Fine Arts. Nonetheless, he thought of himself as a connoisseur of the arts and when became Führer, he had a dream to create the European Art Museum in Linz, which would collect all the greatest masterpieces in the world. The hunt for masterpieces kept in conquered countries began.

Luckily, most of these items were recovered by agents of the Monuments, Fine Arts, and Archives program (MFAA), affectionately referred to as the Monuments Men – you know the movie and the book about them? Unfortunately, many of these masterpieces are still missing. There is an international effort underway to identify Nazi plunder that still remains unaccounted for, with the aim of ultimately returning the items to the rightful owners, their families or their respective countries. Here is the list of the 10 most important artworks that were lost or destroyed during II World War.

Warning: the stories written here are heart-breaking. I nearly cried when I compiled this list.

1. Raphael, Portrait of a Young Man

It’s Poland’s most famous art loss from WWII. Portrait of a Young Man was taken from the Czartoryski family collection in Krakow to be placed in Hitler’s Führer museum in 1939. It went missing at the end of the war, but every couple of months unverified rumors suggest it was found somewhere – lately in a Swiss bank vault.

2. Vincent van Gogh, Painter on His Way to Work

This Van Gogh was stolen by the Nazis and then lost in fire under an Allied bomb attack on the town of Magdeburg, Germany. Luckily, the lost work has survived through print reproductions.

The Stone Breakers were destroyed during World War II, along with 154 other pictures, when a transport vehicle moving the pictures to the castle of Königstein, near Dresden, was bombed by Allied forces in February 1945.

Upon presenting his paintings commissioned by the University of Vienna entitled Philosophy, Medicine and Jurisprudence, Gustav Klimt came under attack for “pornography” and “perverted excess” in the paintings. In the end, none of the paintings would go on display at the University. In the very very end, in May 1945 all three paintings were destroyed by retreating SS forces.

In 1911 Medicine and Jurisprudence were bought by Klimt’s friend and fellow artist, Koloman Moser. Medicine eventually came into the possession of a Jewish family, and in 1938 the painting was seized by Germany. In 1943, after a final exhibition, they were moved to Schloss Immendorf, a castle in Lower Austria, for protection. In May 1945 the paintings were destroyed as retreating German SS forces set fire to the castle to prevent it from falling into enemy hands. All that remains now are preparatory sketches and a few photographs. Only one photograph remains of the complete painting of Medicine, taken just before it was destroyed.

The Amber Room is a world-famous chamber decorated in amber panels backed with gold leaf and mirrors, located in the Catherine Palace of Tsarskoye Selo near Saint Petersburg. Originally constructed in the 18th century in Prussia, the Amber Room disappeared during World War II and was recreated in 2003.

The Amber Room was looted during World War II by Army Group North of Nazi Germany and brought to Königsberg for reconstruction and display. Its current whereabouts remain a mystery.

This is a portrait of the daughter of Viennese collector Jenny Steiner. It was taken by the Nazis after Steiner’s escape from Austria in 1938. It was consequently sold to an unknown person in 1941 and was never seen since then.

This masterpiece was stored in a French countryside chateau before the Nazis took it with them to Paris in 1943. There, it was set aside to be installed in Hitler’s museum along with 332 other artworks. 162 of those pieces were found but no leads for this one.

This landscape painting by Canaletto was part of Jacques Goudstikker’s private collection which the Nazis seized and purged after he fled to the Netherlands in 1940. Some of the artworks from that collection had been returned to Goudstikker’s heir, art investigators are still looking for this one.

The Nazis got hold of this pastel work by Edgard Degas when they took Baron Mór Lipót Herzog’s collection, a Jewish-Hungarian art collector. Baron Herzog’s heirs have filed a lawsuit against Hungary which seeks the return of his collection, though, this work seems to be lost.