Behind The Yellow Eyes Of The Blue Dog By George Rodrigue 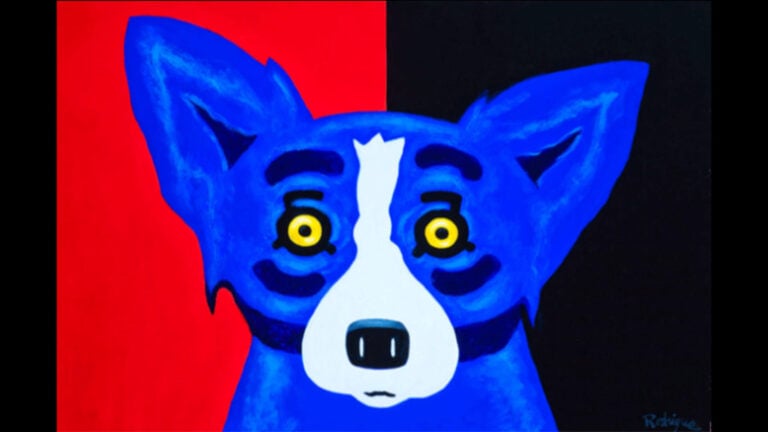 George Rodrigue was an American artist from New Iberia, USA, known mostly for his paintings of the Blue Dog which catapulted him to a worldwide fame.

Rodrigue was born in 1944 as the only child of George and Marie Rodrigue. His father was a bricklayer. Rodrigue began learning to draw and paint after he was diagnosed with polio at the age of 8, and spent several months in bed. He studied art at the University of Southwest Louisiana (now the University of Louisiana at Lafayette) in the mid-1960s and attended the Art Center College of Design (then in Los Angeles; now in Pasadena) from 1965 to 1967.

You may think – why a Blue Dog? Well, in 1980 Rodrigue was commissioned to illustrate a book of Louisiana ghost stories. The book was entitled Bayou and Rodrigue painted forty canvases in reference to the characters and places featured in the stories. In a tale called Slaughterhouse, the narrator tells about an evil dog guarding a house. Inspired by the loup-garou or the werewolf, the artist created the first Blue Dog from a photo of his deceased pet Tiffany, who however was white with black ears.

The Blue Dog was made popular by Absolut Vodka in 1992, when Rodrigue was honored as an Absolut Vodka artist, joining such famous artists as Andy Warhol, and glass artist Hans Godo Frabel. His work was used by both Absolut Vodka and the Xerox Corporation in their national publicity campaigns.

Rodrigue himself commented on a Blue Dog in an interview with The New York Times in 1998:

“The yellow eyes are really the soul of the dog. He has this piercing stare. People say the dog keeps talking to them with the eyes, always saying something different. People who have seen a Blue Dog painting always remember it. They are really about life, about mankind searching for answers. The dog never changes position. He just stares at you. And you’re looking at him, looking for some answers, ‘Why are we here?,’ and he’s just looking back at you, wondering the same. The dog doesn’t know. You can see this longing in his eyes, this longing for love, answers.”

But the artist painted Blue Dogs with presidents, with naked women in faux French scenes, on the lawn with his Aioli dining club party, inside a soup can, and next to Marilyn Monroe. The dog also became some kind of a pop culture star (see our article about BoJack Horseman series). Critics were not always impressed, but he said he did not care. See below:

George Rodrigue died at the age of 69, in 2013, after a long battle with cancer. His work was the subject of two major retrospectives, including one at the Dixon Gallery and Gardens Museum in Memphis and at the New Orleans Museum of Art in 2008.