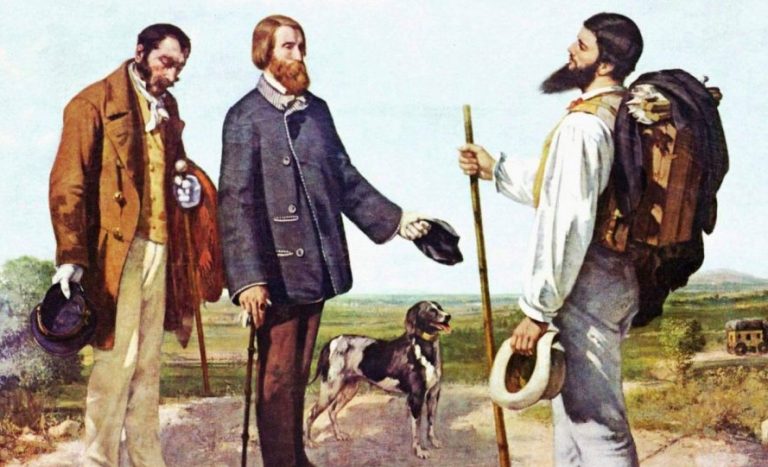 Puppies, Doggies and Pugs in Art (For Dog Lovers Only!)

When we see a dog in a painting, we always try to guess which breed it is. Motivated by this curiosity we have selected some works that show representations of different breeds of dogs in famous paintings.

Additionally, we have gathered some works that carry with them technical and historical curiosities that we sought to demonstrate, such as the importance of the dog in the scene. Here are four paintings with popular breeds in the old days:

This is considered Jan van Eyck’s masterpiece due to the very innovative techniques he used at the time. Particularly, besides demonstrating a great work of perspective and accentuating secondary planes, the work is characterized by having several elements enriched in detail. As a result, these elements collaborate with the narrative of the scene which stimulated several theories about its representation.

The use of bright colors in the painting also accentuates the social aspect. The depiction of textures is so realistic we can practically feel the fabrics present in the image, such as the couple’s clothes and the hair of the dog at their feet.

The Warm Welcome of a Dog

This particular dog would be an early form of the Brussels Griffon (or Griffon Bruxellois) breed, a dog typically bred for hunting rats. Nowadays, we know this breed in a different way from what we see in this picture. Even so, due to the excellence achieved by Van Eyck, we can practically feel the animal alive in the painting.

The dog in this scene opens the door of the house of this newly married couple to us. Consequently, the dog demonstrates, as well as the objects of the house, comfort and tenderness. The dog also brings life to the picture and demonstrates fidelity.

Another interesting element that contributes to different interpretations is the Latin writing around the mirror. It says that the painter was present in this engagement scene. This mirror holds a surprise though, we are able to see the painter’s reflection as well as another witness in the mirror. Practically a 15th-century cinematographer!

Jan van Eyck holds a crucial role in the history of art because his works marked the end of the medieval era. This is due to the development of techniques and accuracy in realistic painting, but he is also called an inventor of oil painting.

You can read more about The Arnolfini Portrait here.

In 1656, reaching the maturity of his work, Diego Velázquez made his masterpiece, Las Meninas. He was able to capture the composition in a harmonic way. Therefore the effect of his brushstrokes creates the illusion of realism and lifelike representation of his subjects, even before photography.

This picture has eleven characters, among them the painter himself. The scene captivates us due to its size (320.5 cm x  281.5 cm), the perspective, and the numerous actions occurring. There are several narratives that are taking place within this painting.

In its foreground, we have Infanta Margaret Theresa, the firstborn of kings, and the court beside her. Her position leads us to believe that Velazquez is painting a portrait of the young noblewoman.

However, looking deeper into the composition and other details are apparent. In the background there is a mirror next to Velázquez, reflecting two heads. Through it, we discover that the painter is producing a portrait of the king and queen.

The Dog as Protector and Guardian

We deduce then, that everyone we see is there because of the king and queen’s order, maybe even to entertain them from the tiresome task of posing for the portrait. The presence of the two dwarfs, who are around the dog, affirms this.

This dog is a Spanish Mastiff, a symbol of loyalty and protection. Native to Spain, it is able to protect everything and anyone in its charge. This breed was used for shepherding cattle too.

The artist exuberantly records a moment of daily life in court, while also having the audacity to portray himself on a court canvas. This suggests to us that the painter is claiming the nobility of his profession and his art. This is because, at this time in Spain, painting was still considered an activity subject to taxes like any other artisan.

Las Meninas captures in a unique way, not only the scene but the spirit of an epoch and all the expressiveness of its creator. The effect of his work allows the imagination to suggest and complete his work, a technique that will be contemplated by the impressionists in Paris in the 19th century.

If we go back to the couple of The Arnolfini Portrait by Jan van Eyck, we will see by how many different means different artists can obtain the desired effects. Van Eyck endeavored to reproduce each one for the curly little animal; Velázquez, two hundred years later only try to capture his more general impression.

This incredible work by Jan Steen portrays the story of Esther from the first testament of the Bible. Steen was a Dutch painter of the Dutch Golden Age. His works often portray animated scenes.

This biblical passage concerns the marriage of Esther, who was a Jew, to the king of Persia, Ahasuerus. He fell in love with her because of her extraordinary beauty, unaware of her religion.

Meanwhile, Haman, the chief minister of King Ahasuerus, planned to annihilate the Jews within the Persian Empire. She then prepared a banquet to expose Haman to the king and came out triumphant. This picture captures the exact moment of accusation.

In the Rococo period, it was common to record mythological and biblical stories. However, we can observe different characteristics in the Baroque style in the Netherlands from the countries to the south. As a result, their paintings are marked above all by humorous scenes and festivities.

Besides, aspects familiar to everyday life and customs in Holland enriched the details of this painting. These include the composition of the still life, china, and furniture.

People usually associate the Dutch art of the 17th century with the atmosphere of revelry and well-being typical of Jean Steen’s paintings.

The Dog in the Scene

In the lower right corner, at Esther’s feet, we find the portrait of a dog in the Spaniel family. It perhaps has its origin in the Iberian Peninsula. This breed is also very popular among royalty today. Initially, its function was as a hunting companion, to catch and retrieve the birds that their owners hunted.

4. Poitou or Saintonge by Courbet

If Vélazquez, in portraying himself in a royal picture, followed all the protocols of respect for those who subsidized his craft, Gustav Courbet‘s daring goes further in The Meeting or Bonjour Monsieur Courbet, almost 200 years later.

The painter was the main icon of Realism in 1855. He opened a solo exhibition in Paris called: Le Réalisme, G. Courbet. The painter proposed a realism that was different from what academic art was accustomed to. It was guided by the search for truth in representation and not beauty alone.

Specifically, with regard to this painting, it did not have intricate arrangements, but rather simple lines and colors as well as a routine situation that does not portray anything sophisticated.

Here, what we see is nothing more than the reality of the situation itself; a painter walking with all his work tools meeting a bourgeois and his companions, a countryman (probably his servant, due to his position and the carriage standing in the background with four horses) and his dog.

The Dog as an Important Element for the Scene

This bourgeois was a friend and sponsor of Courbet’s works, Alfred Bruyas. Being represented with his dog, a Poitou (also Poitevin hound) or Saintonge (also Gascon Saintongeois), reinforces his class. The dog is brilliantly and luminously rendered, showing us that it is a dog with a pedigree. Besides being a hunting dog, the animal is also a symbol of loyalty and protection.

If we pay a little more attention to the picture, we have very interesting observations beyond its realistic “simplicity”. We see that the painter is in the foreground of the painting. The sun shines on him since he is the only one who is not under the shade of the tree. This was an innovative detail in painting the behavior of light outside.

The two men are in the second plane, under the shade of the tree. In the third plane, the shade covers only a part of the dog’s body. They have all removed their hats in the form of a greeting.

The servant and boss are very well dressed. The boss is completely upright while the servant has his head down to show subordination. Courbet, despite his simple attire, holds a staff, affirming his position in this encounter.

When we find the three characters so disposed, we realize that the painter is legitimizing his own craft and his position – like Vélazquez – that he would not be submissive to the tastes of the bourgeoisie to exercise his craft. The dog by directing his gaze back to him legitimizes the honesty of his work.

These details show the boldness of Coubert behind his realism. The impression he conveys in his paintings is, above all, a protest to the customs of his time and to shock the bourgeois. He would not give up his beliefs so that the value of his artistic sincerity would be accepted.