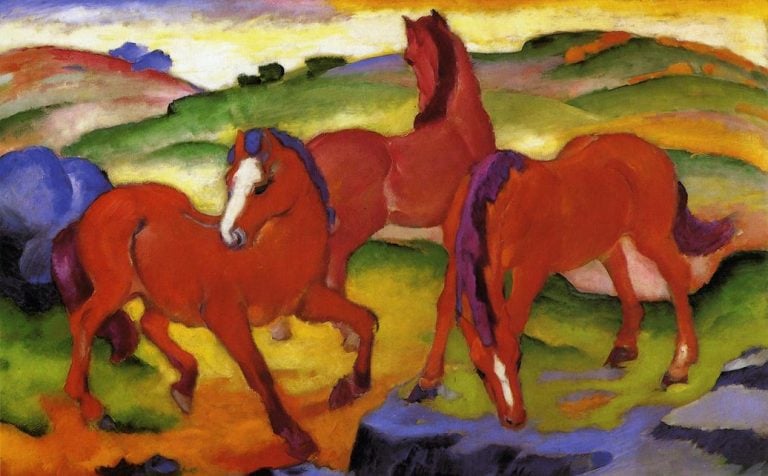 The German Expressionist movement had many faces. One of the most interesting of them was that of the painter Franz Marc. Marc looked to the natural world as an antidote to modern life, from which he felt increasingly alienated. This is why we find so many paintings of animals in his oeuvre. Franz Marc especially loved to paint horses.

Marc was the son of a landscape painter, who decided to become an artist after a year of military service interrupted his plans to study philology. From 1900-1902, he studied at the Kunstakademie in Munich. The following year, he traveled to France; he saw Japanese woodcuts and the works of the Impressionists in Paris.

In 1907, Marc went again to Paris, where he saw the works of Paul Gauguin, Vincent van Gogh, the Cubists, and the Expressionists. Later, in 1910, he was impressed by Henri Matisse’s exhibition in Munich. During this period he received a steady income from the animal anatomy lessons he gave to artists.

In 1910, Marc’s first solo show was held at Kunsthandlung Brackl in Munich. He then met August Macke and Wassily Kandinsky, with whom he formed the group “Der Blaue Reiter”. The name of the movement is the title of a painting that Kandinsky created in 1903, but it is unclear whether it is the origin of the name of the movement, as art historians found out that the title of the painting had been overwritten. Kandinsky wrote 20 years later that the name derived from Marc’s enthusiasm for horses and Kandinsky’s love of riders, combined with a shared love of the color blue.

For Kandinsky, blue is the color of spirituality: the darker the blue, the more it awakens human desire for the eternal. Color was also extremely important for Marc. Not only did he understand the potential for color to affect mood, but he also developed a specific theory of color symbolism. His analysis of color associated blue with the masculine, yellow with the feminine, and red with the physical – often violent – world.

Marc was a sensitive man. He suffered from severe depression, and nature was something calming for him. His works embody the heightened anxieties of early 20th-century Europe, as people struggled with a rapidly changing urban world on the precipice of war. He devoted himself to the study of the anatomy of animals.

When living in Berlin, he spent countless hours at the Berlin Zoo studying and sketching the forms of animals from every conceivable angle. Through rigorous and disciplined study, he created a general concept of animal and human forms. The image of animals continued to become ever more prominent in his art, almost entirely replacing the human form. For Marc, animals were the ideal subject matter for depicting truth, purity, and beauty. As he said:

On the whole, instinct has never failed to guide me…; especially the instinct which led me away from man’s awareness of life and towards that of a “pure” animal. (…) an animal’s unadulterated awareness of life made me respond with everything that was good.

Animals in a landscape were, for the artist, a bridge between man and nature, whose vanished unity he wished to restore. According to him, only animals had preserved a “chaste majesty”.

When World War I broke out in August 1914, Marc immediately enlisted. He was deeply troubled by Macke’s death in action shortly thereafter. After mobilization of the German Army, the government identified notable artists to be withdrawn from combat for their own safety. Marc was on the list but was struck in the head and killed instantly by a shell splinter during the Battle of Verdun in 1916 before orders for reassignment could reach him. Marc died on March 4, 1916, in Braquis, near Verdun-sur-Meuse, France.