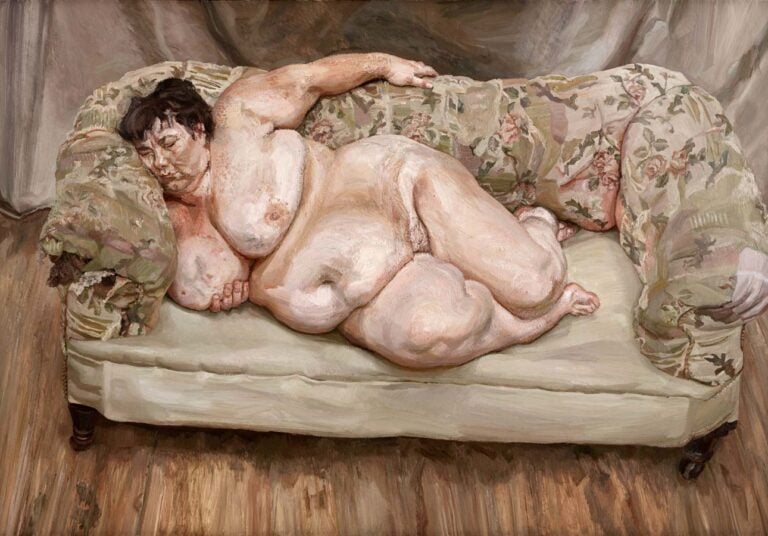 Lucian Freud was born on this day in 1922. It’s a perfect occasion to take look at some of his greatest paintings.

He was conventional in a way. In the late 20th century, he still sticked to realist manner. He constantly created traditional easel paintings on very conventional subject matters like portrait and, above all, nudes. But it is the way he did them that makes him unique.

Freud’s nudes are unflattering, to say the least. They have nothing to do with academic studies of idealized body. Even slightly imperfect nudes of XIX-century realist, like Courbet’s, look favorably next to Freud’s. His bodies are wrinkeled, stout, or lean. Skin looks like it’s gone through a many chronic diseases.

He kept painting people, but he seemed to deeply hate the whole mankind. It’s hard to conceal that he wasn’t a pleasant man. Yet in school, he was the exact opposite of outgoing kid. He spent nights sleeping in a stables, only horses kept him company. When he was back in classes, other students avoided him, keeping at a long distance. They repined to the teaches that Freud stank because of that notorious stables visits. Journalists and his wannabe biographers troubled him for many years. To discourage one of them, the artist ask some gangsters for help.

As a grandson of Sigmunt Freud, the artist couldn’t have evaded psychoanalytical connotations that people have seen in his works. But the model he was most interested with was himself. He painted self-portraits his whole life. In early portraits, models have smooth, a bit greenish complexion, oversized eyes and lips. This style resemble that of Neue Sachlichkeit, a movement that blossomed in Germany before World War II.

And there’s one very special self-portrait, with two of Freud’s kids. He had at least fourteen kids. That is, we know for sure of fourteen, must have been more of them, but Freud didn’t really keep the record. He was married twice, but only two of his children from the first marriage have the same mother. He was almost obsessed with sex, to a very late age, but one cannot find a trace of it in his paintings. Sure, most of them are nudes, yet they are everything but erotic. Freud looked at his subjects like scientist looks at specimens in a lab. Or like Netherlandish still life painters at piles of meat and dead animals.

But he deeply cared about his models’ expression. When he painted a man with a rat in his hand, it’s tail leaning over his thigh. The whole process took couple of months (this was, by the way, quite usual for Freud). Painting a rat at the end, or using a dead one, wasn’t an option. The rat was posing with the model from the very beginning to the end. How was that possible? To make the animal stay still, Freud poured him champagne. The drunken rat laid relaxed. What, judging by his expression, cannot be said about the model himself.

One of the famous people Freud portrayed is queen Elizabeth II. He didn’t make her hold a rat for hundreds of hours, but nevertheless caused controversy. It’s clear why. The painting is very small and humble – just a closeup at queen’s face with pearls on her neck and a crown (which wasn’t supposed to be there, the artist decided to add it while working on the picture). But uncompromising, unflattering manner of this portrait shocked those, who expected to see more royal “dignity”.

Which is quite stupid thing to expect, really. Freud’s powerful gesture makes many other painted portraits of the queen look like a childish attempt to restore 19-century and sometimes even Baroque-era way of portraiture. I think I don’t need to describe it in details. Just take a look at the painting on the left, executed nine years after Freud’s. Looks shallow and silly, doesn’t it?