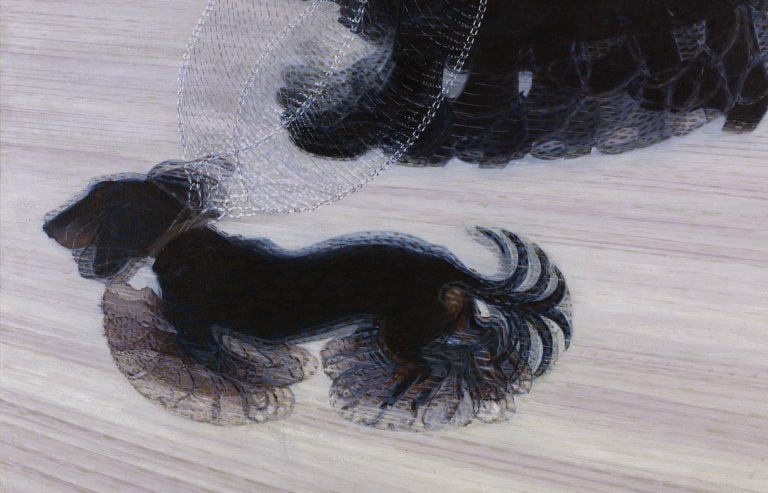 Every Dog Has Its Day…

Dachshunds were first bred around the 15th century in Germany. Their primary purpose was to hunt small animals, particularly badgers, and they are sometimes referred to as badger hounds. Throughout their existence, dachshunds have also attracted a host of famous admirers, and plenty of them are from the art history world. Here are 10 wonderful dachshunds in art!

Although most dachshunds now probably live a more sedentary lifestyle, this extremely intelligent and incredibly stubborn dog is highly sought after. In fact, the dachshund is consistently featured in the American Kennel Club‘s top 10 breeds.

The esteemed French painter, illustrator, and printmaker Pierre Bonnard was one of the founding members of the Post-Impressionist group of avant-garde painters called Les Nabis. He was therefore a leading figure in the transition from Impressionism to Modernism. Bonnard was also a dachshund owner and his dog featured frequently in his works. For example, in this intimate portrait, Bonnard has painted his wife Martha in the bathroom of their home in Cannes. Next to her feet is their curled-up pup, Pouce.

Adolf Eberle was a German painter who trained at the Academy of Fine Arts in Munich around 1860. After that, he specialized in genre painting. Much of his work depicts the quaint peasant life of Bavarian and Tyrolean farmers. Unsurprisingly many of his paintings depict animals, and dachshunds feature quite frequently.

His work stands out not just because of his accurate portrayal of the expressiveness and alertness of dachshunds in art, but also in the enthralled admiration of their owners. A determined dachshund is trying to get his mama’s attention in this painting, possibly for treats!

Max Liebermann was a pioneer of the Impressionist movement in Germany and he was one of the founders of the avant-garde Berlin Secession movement as well. Subsequently, he had a successful career painting commissioned portraits. He painted over 200 during his lifetime including one of Albert Einstein. This portrait, however, was not a commissioned work but one of his granddaughter, Maria Riezler-White. On Maria’s lap is an adorable sleeping dachshund.

Sir Edwin Henry Landseer was a successful painter, engraver, and sculptor in the early Victorian period. He was so successful that he was said to be Queen Victoria’s favorite living artist. Landseer primarily painted portraits and historical scenes. Significantly, he was best known for his animal portraitures and anthropomorphic studies. Queen Victoria commissioned him on many occasions for portraits of herself, her family, and even her pets.

This painting is another example of dachshunds in art. It depicts Ziva, one of the two dachshunds belonging to one of her relatives, Ernest II Duke of Saxe-Coburg-Gotha. The dog is staring expectantly at the dancing monkey who is more interested in eating fruit than playing with the dog. The hat with its peacock feather visible in the background belongs to a Tyrolean musician. Beside the hat is a faience of 18th-century German origin.

Unlike the other images in this list, The Match Seller has a darker theme. This bleak painting by Otto Dix is a part of his series showing the devastating plight of war veterans and was intended to shed light on the atrocities of war. It depicts an injured soldier’s grim existence as a match seller on the streets. He is a blind quadriplegic, and the passersby are either fleeing from him or ignoring his plight. There is a dachshund in the bottom right urinating on the stumps of his legs, to further highlight his woeful existence.

Otto Bache was a student at the Royal Danish Academy of Fine Arts who honed his skills during his travels to France and Italy on an academic grant. Although his later works were more focused on historical and genre paintings, Otto Bache showed great interest and acumen in paintings of animals in the earlier period of his artistic career. This is Bache’s adorable painting of dachshund puppies, but there is something not quite right about the eyes of the two dachshund puppies in the top right of the painting – they seem awfully mature for puppies.

Thérèse Schwartze was a Dutch portrait painter who had a very successful career creating portraits of Amsterdam’s elite. Schwartze was the few female painters whose portraits are included in the hall of painters at the Uffizi Gallery in Florence! This commission was the family portrait of Queen Wilhelmina van Oranje-Nassau, Prince Hendrik van Mecklenburg-Schwerin, and princess Juliana van Oranje-Nassau. While the focus of this painting is undeniably on the human sitters, the family dachshund has also been included on the bottom left, looking up at his family with earnest attention.

Giacomo Balla was an important Italian Futurist who was interested in capturing movement or a series of planes. For instance, this painting, which is one of the best-known studies of animals in motion, is also one of the most important works of Futurism. The painting depicts a dachshund in rapid motion at the feet of a woman walking who walks it. The motion is portrayed by blurring and multiplication of the subjects and the leash. This painting has been a part of the collection of the Albright-Knox Art Gallery since 1984.

Much of his life remains an enigma, but it is apparent from his work that L. Riedler was an accomplished animal painter. Moreover, it is undeniable that he was intimately familiar with this German breed and its great propensity for destruction. This is the first of a two-part series showing two dachshunds playing tug-of-war. In the second painting in the series, the dachshunds have successfully torn up the accordion.

Although he started out as a landscape painter, Carl Reichert gained great acclaim by creating genre paintings, town scenes, and animal portraits. In around 1870, he started to follow in his father’s Heinrich Reichert’s footsteps and he turned to animal portraitures. He became particularly well known for his paintings of dogs and cats. His works portray an undeniable affinity for dogs and he created many dachshunds in art! In this adorable painting are three dachshund puppies curiously inspecting a frog. A fourth puppy sits close by and watches from a distance.