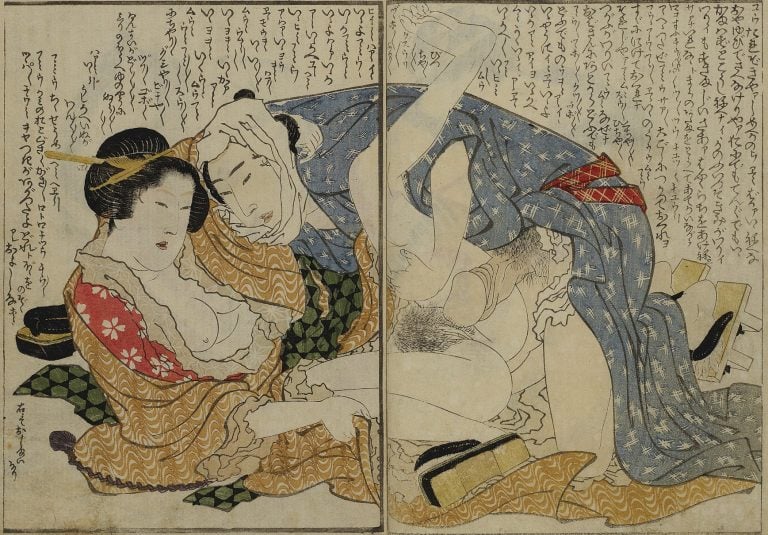 Ukiyo-e art, pictures of the “floating world” are famous among those interested in art history. Everyone knows Hokusai’s The Great Wave off Kanagawa. Ukiyo-e also became very popular among artists from the second half of the 19th century. With their colors, clear lines, and composition, they influenced artists such as Édouard Manet, Henri de Toulouse-Lautrec, Vincent van Gogh, and the French Impressionists. However, there is one type of ukiyo-e that isn’t presented as often as 36 Views of Mount Fuji. It’s the type that surprised Western visitors to Japan when they discovered it. The type that was characterized by a seemingly relaxed attitude to nakedness and sexuality. It’s Shun-ga, which in Japanese means “spring pictures.”

And they will blow your mind

The Japanese approach to sexuality was very different from the European one, where sexuality had been cloaked in heroic and religious connotations. European art was mostly limited to the female naked body (although male nudes rarely happened too, and we were trying to spot them in this article). In Japanese culture, a playful approach to sex is in central focus. Religion, philosophy, and medicine are often employed in them as a metaphor.

What always seems important is the consensus of the participants and the lack of violence, which is only rarely a subject of the genre. Also, a frequent touch of humor – supported by entertaining dialogue – is added to them. Shunga offered sexuality an unashamed visual platform, where sexual pleasure, female sexuality, and homosexuality were not only acknowledged but encouraged.

The primary use of shunga would have involved viewing and sharing the paintings or books with close friends or sexual partners. The images were also used to provide sexual education for young couples, or to encourage a warrior going into battle. It seems that they were also highly valued by women, as it has been found among the material goods presented to a Japanese bride.

As the scenes may not be easy to understand in some cases, note the titles. The majority of shunga depict the sexual relations of ordinary people. Occasionally Dutch or Portuguese foreigners also appear. Courtesans also form the subject of many shunga.

Regarding the genitalia – shunga couples are often shown in unrealistic positions with exaggerated genitalia. There is an interesting explanation for this; it increased visibility of the sexually explicit content. Moreover, the genitalia is interpreted as a “second face”, expressing the primal passions behind the everyday face, passions that women are obligated to conceal, and is, therefore, the same size as the head and placed unnaturally closely to it, in an awkward position.