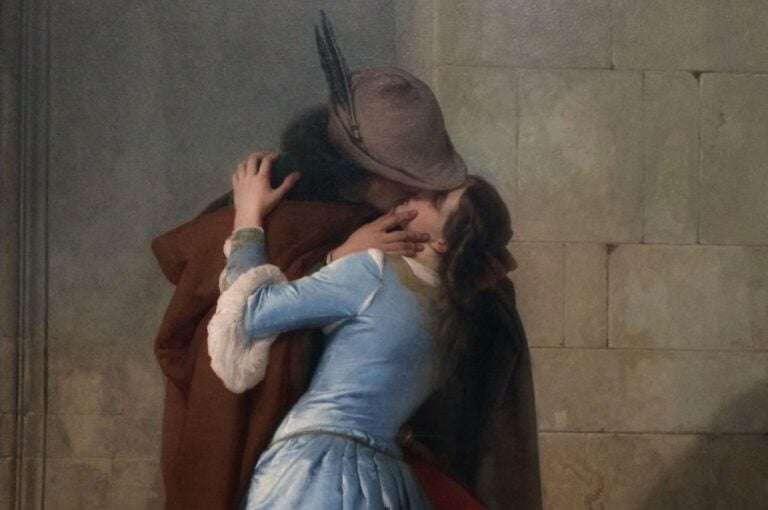 Francesco Hayez was born in 1791. His maternal aunt’s husband noticed his predisposition for drawing and supported him by funding his drawing lessons. In 1806, at only 15 years old, Hayez entered the New Academy of Fine Arts.

Possibly his most well-known painting is The Kiss. The painting, which portrays a romantic and passionate (and probably secret) encounter, is one of the most beautiful kisses in art history. The artist, in addition to painting biblical, mythological and literary-themed art also kept busy recording historical events and important figures like Ferdinand I.

In another drawing of the same name, Hayez portrays the couple in the same position, but from another perspective. This angle also allows us to recognize the attention that the artist paid to human anatomy. In addition, there is a curious detail: the couple is not in a bed, but on a dais. Are we seeing a clandestine meeting? Well, even if it is, it is clear that, unlike the first image, the couple could completely undress.

In Sexual Intercourse, the idea of penetration is imagined. Both partners touch each other before the sexual act which is present in the drawing Overlapping Wife Back Position On The Swing, in which the woman seems to sigh and moan in pleasure while she is being kissed by her lover. The only problem with this design is the socks. Let’s face it, socks? Really? They must have been in a rush.

Zucchi posed for a series of Hayez’s paintings as historical and mythological characters, and also had her portrait painted. However, the romance between Hayez and Carolina did not end well. The painter married another woman and Carolina fell ill, deeply saddened by the fact that she would never unite with her lover.