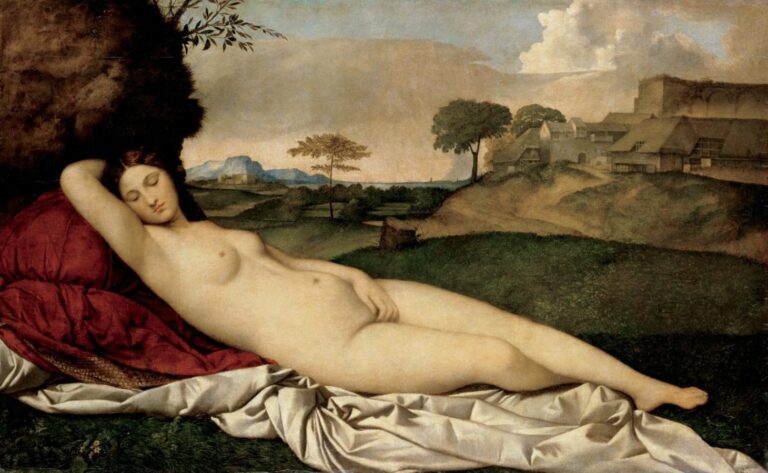 Museums are filled with paintings of nude women. It is a very codified practice that has changed over the ages. Giorgione’s Sleeping Venus inspired many artists; and, through their representations of Venus, artists created a pattern. This pattern evolved along with time; and different revolutions in the depiction of women in art were a result. Venuses became Odalisques and then Olympias. There are a lot of patterns in art history. We can see this by using a few different examples. The Moderns depict real women with realistic bodies. In contrast, the Antiques depict ideal women with ideal bodies. Let’s continue to explore female nude codes in painting.

When naked women were goddesses

The first artistic representations we have of Antique goddesses were by Antique artists, mostly sculptors. Of which, A great example, is Praxiteles’s beautiful Aphrodite of Cnidus. Art theoreticians later considered Antique art as an incarnation of beautiful forms, perfect proportions, and materialization of the reason. That is why it had such a great influence on the following centuries, especially the Renaissance. One of the characteristics of the Renaissance is the desire to return to Antiquity. We can see it very clearly through art of the time. Mythological subjects and Antique forms of bodies were very appreciated by Renaissance artists.

Click the link to read this great article about Venus in art!

Giorgione was very notable among the many artists inspired by Antiquity. In his time, goddesses were the only women artists could represent naked, since they were but fictional women. Goddesses were the pinnacle of beauty, especially Venus and Aphrodite. They embodied the ideal female beauty archetype because they reached a level of perfection. Giorgione stayed in the lane of traditions when he painted his Sleeping Venus. The reclining goddess has remarkable, flawless skin and beautiful curves that echo those of the landscape in the background.

On another hand, this painting was an order for a wedding. It was made to be hung above the marital bed. Paintings, especially the ones that represent beautiful women or sensual scenes, were believed to influence the couple’s fertility. The paintings could, therefore, be sensual; but the goddesses could not be provocative.

Giorgione’s and Titian’s Venuses share many features. The latter used his fellow painter’s work as a stepping stone in the evolution of Venus’s representation. Comparing them highlights these features and differences. First of all, a big difference would be the setting. Titian depicts his Venus in a palace, whereas Giorgione’s is outside. By painting the figure in a closed and private space, Titian relies on the notion of intimacy implied by the setting. We can add to the great differences here the fact that Titian’s Venus is awake and looking directly at the spectator. Those two elements are very important as they attest to the evolution of the representation of Venus.

This is not Titian’s first nude female painting; he has a lot of experience in this area. Therefore, this painting is a mature one, and there are many thoughts behind it. It is then with full consciousness that Titian painted an erotic representation of Venus. It is clear that the representation of a nude woman who embodies ideal beauty, lying on a bed, is a sensual staging. Another difference between this painting and others like Giorgione’s Venus is the affirmation of sensuality by Venus herself. Her open eyes are proof of her awareness to her nudity and sensuality. The position of her hand thus cannot be innocent.

Titian’s painting starts to explore the line between nude goddesses and nude women. As the impact of mythology and Antiquity has faded, the representation of women nudes has evolved.

Odalisques in painting: the oriental woman as a fantasy

In the early 19th Century, Napoleon went on expeditions to Egypt and Libya. In the same years, France colonized some North African countries such as Algeria and Morocco. The eyes then turned in the direction of those countries that had whole new culture, geography, and climate. They were yet to be explored by Occidental people. Thus this Orient, as they called it, attracted the artists. Some of them – such as Delacroix – went there to explore it and then depict it through his art. However, Orientalism mostly expressed itself through a depiction of the imagination and the fantasies the artists had of those countries.

Ingres is one of the artists who painted a fantasized vision of the Orient. In his famous painting the Grande Odalisque he depicts his idea of an odalisque, which were harem concubines. Here Ingres exploits fantasy and ideal.

“The Orient intertwines with the ideal of Greece.”

Théophile Gautier about the Grande Odalisque

Indeed, we can see the Oriental influence in the choice of the subject and the surroundings: her accessories, the luxury, and warm-colored drapes. However, the Antique model influenced the treatment of the body. Giorgione and Titian are great inspirations for Ingres, and so are their Venuses. We can see in this painting the influence on the woman’s pose and frontal look.

In this case, painting a nude woman -whether or not her origin can be traced back to mythology or history – was okay because she was not considered a realistic, identifiable woman. She was a dream fantasy woman.

The modern nudity: a new vision of women

Manet as a turning point

With his Olympia, Manet wanted to be in line with the great masters. We can see the influence of Titian’s Venus. Manet represents a woman lying naked in a bed. The Olympia is also looking directly at the spectator, aware of her own nudity. Manet took the two chambermaids in Titian’s work and turned them into one. He also turned the dog into a cat. However, this painting breaks with the masters’ as it is not an idealized representation of the woman.

Manet’s Olympia is inspired by the masters’ Venuses. Their depictions of naked women were legitimate because they were mythological figures. However, Manet’s subject is a prostitute. In the vein of the Realists, artists of his time, Manet painted real women; and in this case, a woman he knew. His Olympia is a prostitute named Victorine Meurent, and the possibility of knowing the woman depicted naked in front of you was a part of the scandal surrounding this painting.

The contemporary photographer Jan Banning used the facts that the Olympia depicts reality (a real woman) and had a shocking effect at its time to criticize the society he lives in. The inversion of the role of the black and white women is part of a work that challenges xenophobia and racism. He does that through the reinvention of Manet’s famous work.

Naked women, reclining or not, have always been a subject cherished by artists. We can see this is true through the entirety of art history and by studying the different influences of the artists and the evolution of those representations. It is a testimony of the break between the classical and the modern in the masters’ choices of subject, style, and purpose.

If you are interested in female nude codes in painting, check also: