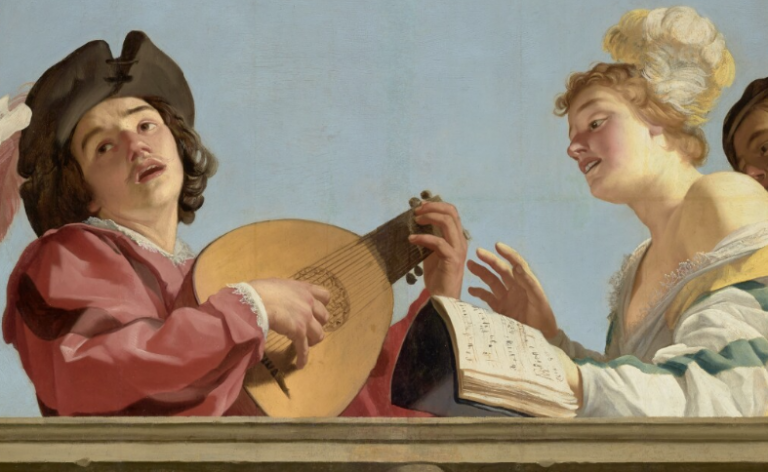 There is an undeniable symbiosis between painting and music. The influence of one medium on the other is profoundly apparent in the works of many artists such as Wassily Kandinsky or Paul Klee. Artists have often explored tunes and the overall aesthetic of rhythm in their paintings. It should come as no surprise that the performance of music has been a recurring theme and forms a significant body of artwork throughout time. Here are 10 paintings that depict music in art.

1. Rehearsal by the Window

Silvestro Lega was a 19th century Italian artist. His artistic style was best described as purismo, although over time it evolved into Realism. Despite an acquaintance with the Macchiaioli painters of Tuscany, his artistic style remained traditionally academic. Lega was a serious and somber man, and this attribute is evident in this artwork.

This painting is from what came to be known as his “happy” period which spanned from 1861 to 1870. During this time, he lived close to the esteemed Batelli family to maintain his relationship with their elder daughter, Virginia. Several of the Batelli family members featured in his paintings of this period.

Here there are three women by a large open window. The room has tall ceilings, heavy drapery, and carpeted flooring. The two women in the back appear to be singing along with the young pianist. The muted color palettes and the depictions of the women add to the apparent seriousness that Lega has been criticized for.

Emil Rau was a late 19th century painter from Dresden, Germany. Rau rejected the contemporary progressive standards of art and painted what he became best known for – his romanticized depictions of rural Germany.

This artwork exemplifies his core aesthetic. In this quaint painting is a young couple in traditional German clothing, seated on a wooden balcony. The backdrop is an idyllic rural landscape with rolling hills and green meadows. As the name of the artwork suggests, the woman appears to be serenading the very interested man before her. The flirtatious gaze of the man, the shy smile of the woman, and their intimate body language forms a powerful image. The viewer is almost intruding on this moment.

François Boucher was perhaps one of the most celebrated Rococo style painters of the 18th century. His incredible artistic talent featured in paintings, theatrical costumes, set designs, as well as tapestries.

This idyllic pastoral scene by François Boucher was used as a motif that featured prominently in tapestries known as “Boucher’s Children,” produced by the Parisian Gobelins factory. It was also adapted into figurines and other designs. It depicts a young child playing bagpipes while a small dog, likely a spaniel, watches him with great curiosity, up on her hind legs. Sheep surround the boy also adding to the sense of calm serenity in this painting.

Osman Hamdi Bey was a prolific artist and intellectual. Belonging to a political family, he pursued an education in law and even held political office. His was also an accomplished archeologist and founder of the Istanbul Archaeology Museum and Istanbul Academy of Fine Arts (now known as the Mimar Sinan University of Fine Arts).

When he decided to pursue his passion for painting, he sought the tutelage of great masters like Jean-Léon Gérôme and Gustave Boulanger. Furthermore, Hamdi Bey’s contributions to the artistic domain include some of the most prolific works in the school of Orientalism.

In his paintings, he portrayed Ottoman women engaged in various pursuits, such as reading or making floral arrangements, and of course, playing musical instruments. Here the subjects are two female figures playing the tambourine and the lute. They are wearing luxurious silken robes with scarves in complementary colors. The artist has incorporated architectural elements of the Mosque of Mehmed I or the Green Mosque in Bursa, particularly in the tile-work and the arabesque patterns of the backdrop, accented by ornate rugs.

Georgios Jakobides was a prominent Greek painter and a proponent of the Greek artistic movement of the Munich School. Jakobides founded and was the first curator of the National Gallery of Greece in Athens. He lived in Munich for a long time, thus his work reveals Germanic influences. The setting of this painting, for example, is the traditional interior of a Bavarian home of the time.

The setting is a noisy and playful domestic scene in a brightly illuminated room with large windows. The source of the revelry is the four young boys who are using assorted objects to put on a compelling musical performance for their mother and sisters. The youngest sibling and their mother are seated by the window on the left, the mother tends to her youngest who is pleased by her brothers’ performance. The older sister is sitting by the window in the center and she is undoubtedly pleased too.

The barefoot children as well as the warm colors imbibe a comfortable feeling of relaxation as well as nostalgia. An earlier version of this painting from 1896 was created in a gray color palette, however, in this version brighter colors were utilized to incorporate Post-Impressionist tastes.

This painting depicts a reoccurring Biblical scene of David and Saul. According to scripture, Saul, the first ruler of united Israel, grew increasingly resentful of young David’s growing success. On two occasions Saul threw a spear at David as he played the harp. This story has been conveyed by many artists.

In this rendering, Saul is depicted reclining comfortably on a grand chaise lounge. His attention is focused on the young David who is seated on the rich rug before him, playing the harp. Despite the relaxed body language of Saul, the dreaded spear appears prominently in his hand, dangerously close to its intended target. Also noteworthy is the rich backdrop of the setting, complete with sculpture and relief panels as well as intricate tapestry.

Gerard van Honthorst was a late 16th or early 17th-century painter of the Dutch Golden Age. He was best known for his nocturne paintings that were illuminated by artificial light. Thus he was given the moniker Gherardo delle Notti or “Gerard of the nights”.

The artist trained briefly in Italy and was profoundly inspired by the style of Caravaggio. Unlike his usual nocturne scenes, this painting is an uplifting and celebratory depiction of performers gathered around a balcony in the daytime. The performance appears to be directed at the viewers below. The figures are gathered around the balcony and the joyousness of the occasion is made evident by the bright clothing and the palpable air of festivity. A parrot and a dog join the musicians in observing their audience.

8. Music on a Parisian Night

This painting presents an animated and powerful image of a vocalist in the midst of her performance. Edgar Degas expertly captured the singer’s high note and her complete surrender to the scene in his rendering of her gestures and body language.

Although we do not know what she is singing, it is impossible not to be moved by her performance. The painting is set at a late hour in a Parisian café. It belongs to the period when Degas was exploring pastels along with Mary Cassatt.

Frederic Leighton was a British painter and sculptor, acclaimed for his work in the academic style. He depicted historical, classical, and biblical themes that were very well-received.

In this beautiful painting, Leighton depicted two of his recurring models playing a percussion instrument known as a “saz”. The younger woman pictured was Connie Gilchrist, who famously modeled for James McNeill Whistler, Frank Holl, and even the photographer turned writer, Lewis Carroll. Gilchrist went on to become the Countess of Orkney.

Here she appears to be receiving a music lesson from the older figure who has her arms around both her young student and the saz, in a manner that is familial and affectionate.

The ladies are dressed in beautiful dresses made in luxe, and pictured within Middle-Eastern architecture that was inspired by Leighton’s travels to Syria.

Last on this list is the Hungarian artist, Vida Gabor. Gabor trained as a musician and worked at the Philharmonic Orchestra for the Budapest Opera for about 25 years.

Although he pursued painting and sculpting, he turned to it full-time when he was about 40 years old. He is known for his unique aesthetic that is visually distinctive. His carefully implemented paintings were a realistic reflection of the old European world that somehow also maintained the look of caricatures. They are incredibly detailed maintaining both a realistic quality and a painting-like quality. Gabor’s paintings were often nocturne and his subjects were older men and women.

This painting, aptly named Old Friends, depicts a warm scene of an older group of gentlemen enjoying a late evening of drinking and merrymaking. It is evident from the scene that the men are well-acquainted with each other, perhaps for a long time as they relax and joke with each other. One of the men is portrayed playing the violin – no doubt, an upbeat tune.

If music is the soul of an album then the art on the cover must be its body. The choice of artwork for an album cover is an important one because at...