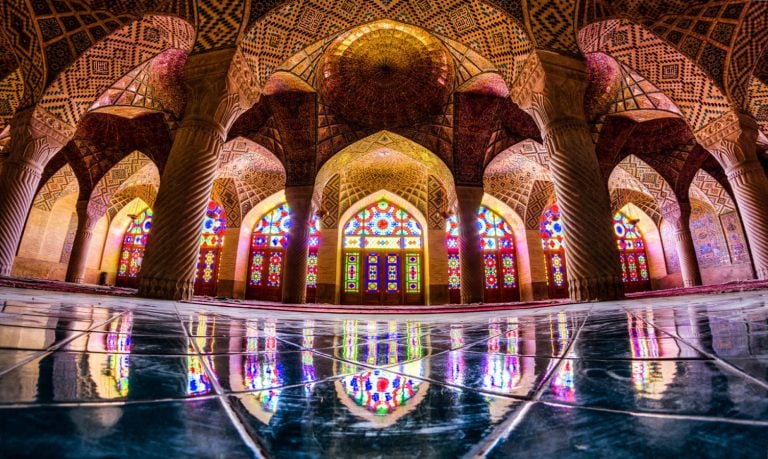 To commemorate the holy Islamic month of introspection, fasting and prayer, DailyArt Magazine would like to take you on a virtual journey to seven exceptional mosques around the world, each a magnificent architectural masterpiece. Ramadan Kareem.

Mosques play an important role in Islamic society. They have served as a meeting place for the Islamic community for Friday prayers and sermons as well as for community activities such as political and social functions, places of shelter for the poor and needy, and places for religious instruction. During Ramadan, observed in the ninth month of the Muslim calendar, adherents gather at mosques to pray.

While mosques often adopt the design and artistic heritage of their place of construction, they all share some common attributes such as the placement of the mihrab, calligraphic adornments with Qur’anic verses, and arabesque and geometric patterns.

The Great Mosque of Damascus, also known as the Umayyad Mosque is among the largest and oldest mosques in the world. The style served as inspiration for later imperial mosques. The structure was first built around the 8th century with several significant additions over the years. The four minarets are from four different periods of time!

There is remarkable mosaic work created by Byzantine workers that adorns the prayer hall, facades, and the perimeter of the mosque. It is considered by some Muslims as the fourth most holy place in Islam.

The Badshahi Mosque in Lahore was commissioned in 1671 by the Mughal Emperor Aurangzeb. It was the largest mosque in the world for over three centuries — the Taj Mahal could fit comfortably within the courtyard of this mosque. As with other Mughal monuments, the architecture of the mosque combines Central Asian, South Asian, and Persian elements.

During the Sikh Civil War and throughout British rule, the mosque was used as a military base and fell into grievous disrepair. After 1947, the newly formed government of Pakistan undertook extensive conservation efforts that continued through 2008 to restore this beautiful monument to its 17th-century glory.

The architecture of this mosque represents many significant periods of  Chinese history. The construction began during the Tang Dynasty in 742 and significant additions were made during the Song (960-1279), Yuan (1271-1638), Ming (1368-1644), and Qing (1644-1911) dynasties. The complex also exhibits Arabic influence fused into the otherwise traditional Chinese elements to create a breathtaking effect. The calligraphy on the structure is in Chinese, Arabic, and Sini, which is a unique amalgamation of Arabic text written in a Chinese-influenced script.

Islam was introduced to China by Arabian merchants during the Tang period. The Great Mosque was commissioned to honor the founders of Islam in China. This is also the largest mosque in China!

This large, red brick structure is among Cairo’s best-known monuments. It was commissioned around 876 by Ahmed Ibn Tulun, the Abbasid governor of Egypt. The architectural style and decorative elements of the mosque were from the Abbasid dynasty of modern-day Iraq and Iran and were quite foreign to Egyptian architecture of the 9th century.

There were several restoration efforts in antiquity, most significantly around 1298 when the minaret and the wall facing mecca were renovated. Thereafter the mosque fell into disrepair and came to be used as an asylum for the poor and the mentally challenged.

Modern renovation efforts on the mosque began in 1884 on the recommendation of the newly formed Comité de Conservation des Monuments de l’Art Arabe. It continues to be an active place of worship today!

Kairouan was a vibrant cosmopolitan city and one of the first cities in North Africa to be organized under Islamic rule. This mosque, also called the Mosque of Uqba, was commissioned in 670 by the Arab general and conqueror Uqba ibn Nafi. There was significant reconstruction in 836 under the Aghlabid dynasty. The structure is a reflection of the time period of the original builders as well as the significant contributions of those who came after. The four minarets of the mosque are all from different eras!

The mosque combines Byzantine and eastern Islamic motifs blended into a North African style. It is a remarkable example of Islamic architecture and is one of the most important mosques in Tunisia.

This breathtaking mosque was commissioned in 1876 by the order of the Qajar ruler, Mirzā Hasan Ali (Nasir ol Molk) in the ancient city of Shiraz in Iran. Shiraz has a long and rich artistic tradition, and the Nasir ol-Molk mosque stands as one of its stunning examples!

Nasir-ol-Molk Mosque is also known as the Pink Mosque and it stands out for its incredible stained glass windows — a relatively rare occurrence in Islamic architecture. The exterior is covered with an array of colorful painted tiles while the beautiful stained glass forms an enchanting kaleidoscope effect on the interior that is echoed by more colorful tiles and the impressive Persian rugs covering the floor!

Completed around 1404, this stunning mosque is one of the most important monuments of Samarkand. It was commissioned by Amir Timur or Tamerlane after he returned from his India campaign. It is believed that he brought architects from Iran and India and used nearly 100 elephants to haul construction materials to the site. The mosque was dedicated to Timur’s wife who is buried in the same complex.

Unfortunately, the mosque was fraught with structural integrity issues that emerged soon after the structure was completed. These have been attributed to many rushed and unplanned changes Timur insisted on. Soon after construction was complete, the first bricks begun to fall out of the dome over the mihrab and this grand structure was in ruins by the mid-20th century. Significant restoration efforts took place under the Soviet regime to restore this magnificent mosque to the glory of the Timurid period.