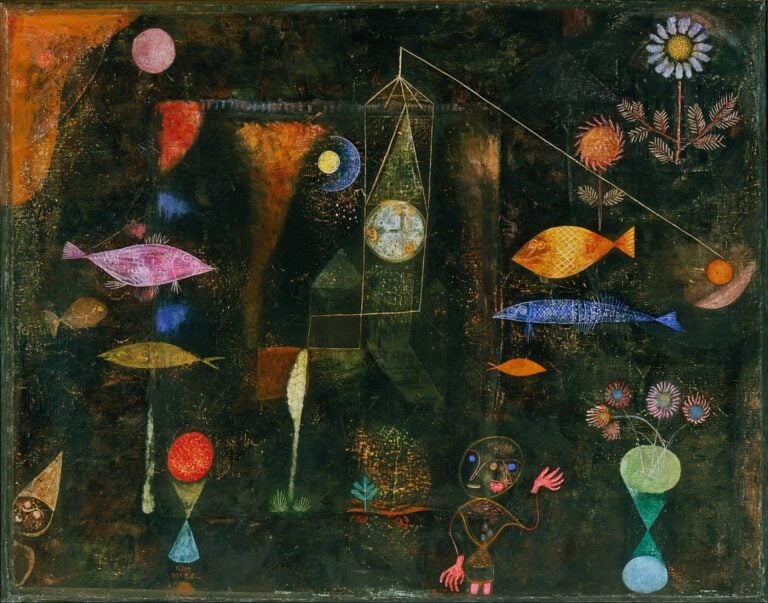 Fish Magic is a mysterious and very fascinating work by Swiss-born German artist Paul Klee, a painter who balanced on the verge of a few modern art movements such as Expressionism, Cubism, and Surrealism. The traces of all of them are present within this oneiric, almost fluorescent painting (but not really, read why!). It is crowded with weird, aquatic creatures which seem to flow out from the deep darkness to appear to the viewer for just a moment before vanishing again into the depths of Klee’s magical world.

When I was a child, my parents decorated a wall in our house with a reproduction of a warmly-colored painting with two small camels and a donkey lost in a composition of abstract rectangles. It turned out to be a painting by Paul Klee. It was through these little camels that my continuing fascination with the magical world of weird creatures living in Klee’s artworks began.

Paul Klee was born to a family of musicians on December 18th, 1879 in a small Swiss town near Bern. Both the picturesque Alpine landscape and musical traditions had a great impact on his future works. At first he was supposed to be a musician, but eventually he decided on visual arts. At the age of 21, Klee moved to Munich, Germany to study at the Academy of Fine Arts.

What is absolutely surprising is that in the early years of his career Paul Klee was strongly focused on drawing, leaving the colors marginalized. He wasn’t very successful until 1911 when he joined the editorial team of the almanac Der Blaue Reiter, founded by Franz Marc and Wassily Kandinsky. This association of Expressionist artists finally opened Klee up to color theory. Moreover, a trip to Paris exposed him to the ferment of Cubism and early Abstract Art, leaving Klee fascinated by Robert Delaunay’s bold use of color.

All these experiences prepared a foundation for his artistic breakthrough, which came about during his travels to Tunisia. He wrote:

Color has taken possession of me; no longer do I have to chase after it, I know that it has hold of me forever… Color and I are one. I am a painter.

After returning home, his style took a completely new direction. He began to mix techniques. He enriched his wide graphics experience with a new palette of vivid colors, simultaneously moving towards an abstract manner of painting. That’s how Klee’s unique style was born and opened doors to his great career. Klee taught at the Bauhaus from January 1921 to April 1931. At that point the times got dark and uneasy, also his art began to be considered degenerate by the Nazis. Soon he had to flee back to Switzerland.

Fish Magic is a mysterious and very fascinating painting from a time when Klee was experimenting with color. The painter used a very interesting technique to get the effect of fluorescent colors, as well as an impression of depth without using perspective. Subsequently this artwork is technically not exactly a painting. There is a piece of cloth glued to the base canvas and therefore this work should rather be classified as a collage.

Besides, the surface of the painting is covered with multiple layers of several bright hues such as blue, orange, red, and pink. Next he covered them with a layer of dark paint which registers as the actual background of the painting. Klee then used a stylus and some other tools to scratch out the elements which appear on the blackish surface. Depending on how deep he scratched different colors (from several colorful paint layers) appeared. The smooth, wavy lines in vibrant colors almost seem to move, drawing the creatures in front of the viewer’s eyes.

Fish Magic is filled with many magical creatures. There are truly fantastic fish and other aquatic beasts, there are plants and flowers, and also we can find some celestial bodies. To make it even weirder, there are some humanoids, geometric figures, and a clock tower! This motif appears quite frequently in works of the artist.

Klee was a painter who cannot easily be classified as a member of any specific art movement. He actually balanced on the verge of a few of them, including Expressionism, Cubism, and Surrealism. The traces of all of these movements are present in this oneiric, almost fluorescent painting, crowded by weird, aquatic creatures which seem to flow out from the deep darkness to appear to the viewer for just a moment before vanishing again in depths of Klee’s magical world.