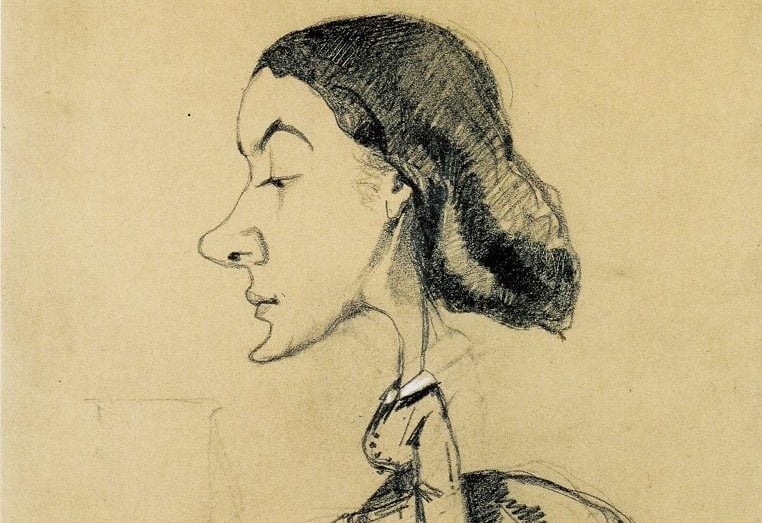 If I say, Claude Monet, you say waterlilies! Impressionism! Monet or Manet? Well, this time we would like to talk to you about a part of Monet’s work that normally receives less attention than the world-renowned paintings. Please, allow us to introduce you to his caricature production.

When I state that this part of Monet’s work has received less attention, I mean people are usually less aware of it. Naturally, we understand why, given that it competes against those beautiful, floating flowery pads. However, there is a great deal to learn about the artist and his history by looking at the selection of drawings we are presenting today.

Claude Oscar Monet was born in 1840 in Paris, a place that would inevitably call him back, exercising its undisputed allure. When the child was about five years old, the family moved to Normandy, to a village called Le Havre. His father wished for him a place in the family grocery and ship handling business, but Claude Oscar had something else in mind! When he turned 11, supported by his mother, he entered the local art school. He attended classes in Le Havre for about four years.

During his stay in Normandy, he met Eugène Boudin, a French artist who loved painting seascapes. He became a mentor and a friend. In fact, it was he who introduced the “Impressionist to be” to the very dear concept of painting outdoors, en plein air.

While attending courses, Monet started drawing caricatures of his classmates and teachers. When not in school, he sketched traders and citizens of Le Havre. The first caricatures he made that we know of are all dated between 1855 and 1857.

As a child, on my school notebooks, while following – badly – classes, I devoted myself with excellent results to caricature.

So, by his own admission, Claude Monet was no teacher’s pet. To me, learning that he wasn’t academically inclined doesn’t really surprise! We should consider that he not only took part but played a leading role in one of the most renowned revolutions of technique in the whole history of art. It could be regarded as cohesive behavior towards a rigid and structured system.

At fifteen, I was well known in Le Havre as a caricaturist. My reputation was so established that I received enquiries of satirical portraits from all sides. The abundance of commissions and the insufficient subsidies that my mother generously donated inspired me with a bold decision, which obviously shocked my family: I got paid for the portraits. […] In one month my clientele doubled. […]. Had I gone on like that, I would be a millionaire today.

If not for Eugène Boudin’s strong desire to initiate Monet to outdoor painting, it is quite possible that he would have kept drawing caricatures for longer. In his letters, our young artist frankly admits it was a flourishing business and imagines himself as a millionaire cartoonist. Boudin saw the drawings exposed in a shop window of Le Havre. Small in size, but huge in potential. He thought the technique, style, and personality so promising that he could not be deterred by Monet’s reluctance. He had this idea that Monet would excel if he were to start painting…

In a way, caricature came to life when prehistoric human beings felt the need to express themselves and draw, paint, and sculpt. If we think of one of those female figures carved in stone, all hips and bosom, but no face, we can allow the term “caricature” to embrace that, too. Attributes and features are exaggerated to better suggest ideas. In this case: fertility, procreation. One honorable example would be the Venus of Willendorf, among many others.

The genre of caricature went through different phases, reshaped and molded by people, according to the needs and sensibilities of different times. Already Egyptians, Greeks, and Romans all had a go at portraying well-known characters in embarrassing moments of their everyday life. The humor, the satirical purpose, and having a laugh at somebody else’s peculiarities is clearly an evergreen human trait!

Caricature evolved with new techniques and purposes worldwide through the Middle Ages,  Renaissance,  Enlightenment, all the way to 19th century France, when and where Monet lived. In 1830, a decade before our artist was born, the first satirical French newspaper was founded: La Caricature. Later renamed Le Charivari.

The choice of 15-year-old Claude to utilize caricature’s swiftness to express himself seems in harmony with his future painting endeavors. Certainly, it exercised an important influence on his style, realistic yet surreal. Modern caricatures pick few elements and focus on them, knowingly forgetting about proportions. Monet’s drawings meet all the genre’s requirements, capturing the essence of the characters, striving to achieve likeness with irony, through absurdity.

It makes me smile to think how many critics of the late 19th century turned up their noses and spat in disdain at the Impressionists, a groundbreaking group of artists, for not bothering to draw first! Especially because, to some observers, it suggested inadequacy, a mere lack of skill on the artists’ part. Today we understand that it was instead a shrewd aesthetic choice, to crown color as king. To elect it as the vector of immediacy.

Arguably, drawing presented an obstacle to the flowing process of depicting a scene without too much study, en plein air. It could have tempered the desired, spontaneous reality of the finished paintings. However, that does not apply to the fine, detailed, and expressive sketches we have shown you. We can all say with confidence that Claude Oscar Monet could draw.