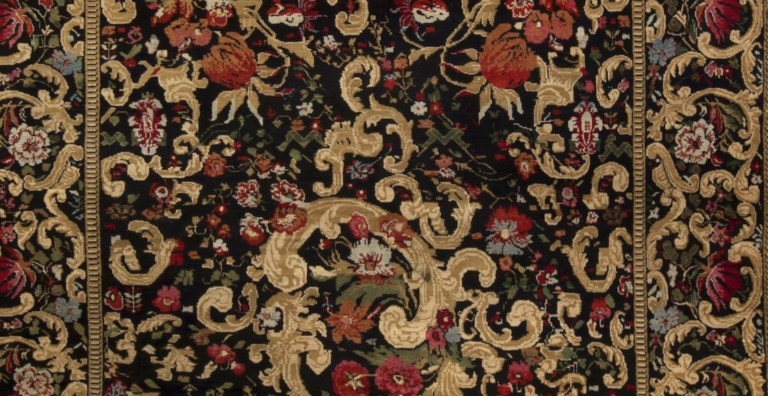 Art history has always been inseparable from international trade exchanges and the mingling of nations and cultures. Manuscripts, works of art, decorative objects, jewelry, household items… They all crossed borders and always had an impact on the place of arrival (although not immediately). Today I want to show you an example of such a cultural exchange, in which Ottoman carpets found their way to Renaissance paintings!

The merchant Georg Gisze, portrayed here by the German/Swiss painter Holbein, was one of those people who imported to Europe various luxury goods from the “Orient.” For example, starting with a rug on the table, there are keys, signet-rings and a spherical container (hanging on the shelf), to a pewter writing-stand with goose-feathers, ink, sand, wax disks, and sealing-wax (on the table). Beside all this we also see a pair of scissors, a signet-ring, a seal, a small table-clock, and the fragile glass vase made of the expensive and fashionable Venetian glass. Venice was one of the Renaissance cities that connected Europe with the East. Therefore, many Venetian painters, such as Bellini or Lotto, often included various Oriental elements in their works, not only carpets.

However, it was not only Venetians who painted rugs. Indeed, the trend spread across Europe starting already in the 14th century. As a result of the extreme detail and realism of such paintings, it allowed scholars from the 19th century onward to see what kinds of carpets reached Europe. Therefore, paintings began to function as historical documents, which since then have been used to recognize and categorize carpets. For example, the carpet above is officially named “Holbein type.” It represents the category of carpets featuring a rhythmic geometric pattern consisting of diamonds (each containing a geometric pattern inside) on the red background.

Any carpet displaying a design of stylized vegetal arabesques in yellow on a red ground would be called “Lotto.” The name comes from the altarpiece by this Italian Renaissance painter. The blue and white border derives from a calligraphy style called Kufi. However, here it is not a writing but a stylized decoration.

The Ghirlandaio carpets display the typical design of a central octagonal medallion inscribed within a square from which curvilinear designs emerge, forming an overall diamond shape.

Now it’s time for an exercise for you: why is the carpet below called a Memling carpet? What features are distinctive for this type of a rug?

Next time you look at the Renaissance painting, try to spot a rug. They are in so many Dutch, German, and Italian paintings; hanging from walls or serving as table-clothes. Rugs are everywhere!