Moving Dialogues Between Art History and The Syrian War 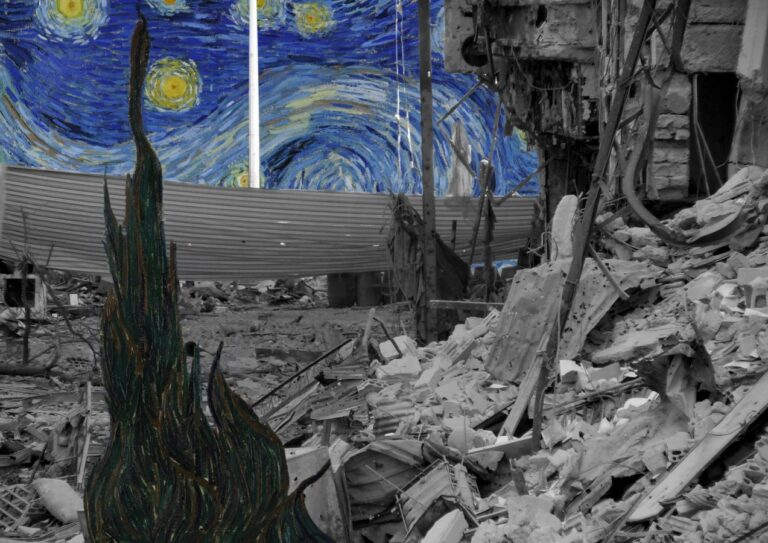 Shahzia Sikander – An Extraordinary Past in Present Time

Delve Into the Intricate Light Worlds of Anila Quayyum Agha

And yet another war. The only thing that I can do about it, apart from donating to humanitarian aid organizations, pressuring my government to take action, and offering support to my friends, is to educate. As an art historian, I choose to educate through art, and today I want to remind you of an artist whose art went viral a couple of years ago, Tammam Azzam. His poignant photomontages with the use of Western art’s most famous works speak out about the atrocities of the Syrian War in particular.

One of the most iconic and widely merchandised paintings, The Starry Night, is seamlessly blended into the cityscape of ramshackled buildings. The juxtaposition of the rubble and our memory of the quiet and serene French town painted by Van Gogh heightens the emotional effect of this scene. Yet, there is hope. The sky is blue again and the stars keep on shining.

Who doesn’t recognize this painting? Edvard Munch’s The Scream, expressing the fears of the entire generation at the fin de siècle. Yet here, Azzam inserts the screaming figure into the photograph of a deserted city, capturing the atmosphere of danger and despair experienced by those who once lived there.

Two Tahitian girls from Paul Gauguin‘s Tahitian Women on The Beach are transplanted from their environment into undefined empty landscape filled solely with UNHCR tents. Are they a metaphor for all refugees who spend hours waiting for help, waiting for something to happen? We don’t know how long they’ve been sitting there and how much longer they will. But the sickly colors of the sky and the ground don’t herald anything promising.

Human face removed from its sleepy original called Sleep serves as an ad hoc roof, a tiny tent over a destroyed city. In the original, the face is suspended over a dreamy imaginary hamlet, yet here the town is far from anything dreamlike. Unless it’s a nightmare.

Matisse‘s famous Dance was commissioned in 1910 by a Russian art collector Sergei Shchukin. The group of women dancing carefreely in a circle has always been associated with the feelings of childlike pure joy that we tend to experience in company when dancing. Yet placing the figures over a heap of debris makes me think of all children who must grow amid war, destruction, and suffering. Scarred forever, they still try to play and experience joy.

Goya’s The Third of May 1808 is an emblematic painting showing the atrocities of war. Goya dedicated a lot of time to illustrating the evils that human beings are capable of committing in his series of prints. This contemporary reworking of his painting shows that Goya is still up to date, and that scene, like this one, still keeps on happening.

Everything started with The Kiss, a work presenting love and affection superimposed on rubbles. The contrast between the ruined building and the beauty and universality of the painting’s message is probably one of the most accurate comments on the war in Syria and war in general. We are as much capable of creating perfect beauty as destroying everything.