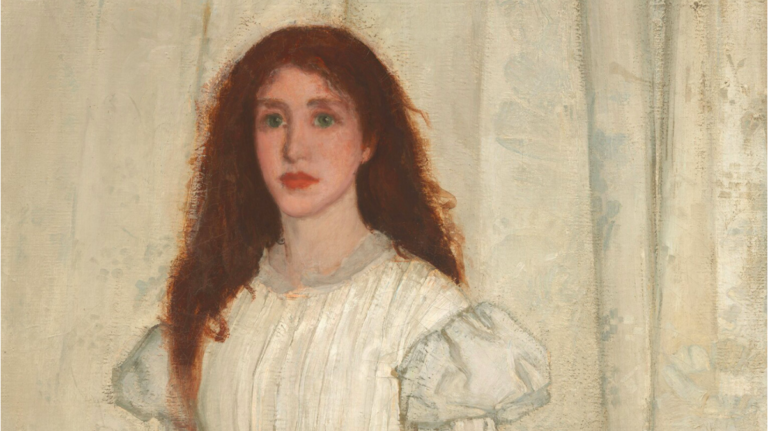 Few Comments on Courbet’s Origin of the World

Joanna Hiffernan and James Abbott McNeill Whistler met in London in 1861. He instantly fell in love with her striking red hair and outspoken character and the couple soon moved to Paris where Hiffernan became Whistler’s muse, partner, and modèle privilégié. For six years, Whistler couldn’t stop painting his muse. Her image became his obsession. Hiffernan managed Whistler’s accounts, organized their domestic life, and acted as an endless source of inspiration, while also being an artist in her own right.

Joanna Hiffernan was born in Limerick, Ireland in 1843. Her family moved to London in the late 1840s, driven by the Great Famine. She grew up poor and likely did not receive an extensive education. Hiffernan quickly adjusted to her new milieu when she and Whistler began their relationship, although the differences in their backgrounds were not without their difficulties.

Hiffernan was rejected by Whistler’s conservative New England family (when visiting her son, Whistler’s mother allegedly requested that Hiffernan be moved out of the house). Whistler’s friends were also critical, characterizing Hiffernan’s background and family in near Dickensian terms.

Despite her struggles to be fully accepted, Hiffernan quickly made a name for herself in Parisian artistic society. She was known for her wit and intelligence just as much as her beauty. Whistler raved about her appearance, especially her hair:

The most beautiful hair that you have ever seen! A red not golden but copper–as Venetian as a dream!–skin golden white or yellow if you will–and with the wonderful expression.

In 1865, Hiffernan and Whistler spent the winter in Normandy with the realist painter, Gustave Courbet. Immediately taken by Hiffernan, Courbet painted her portrait. So enraptured by Hiffernan’s beauty and power as a subject, he produced at least four versions of the composition.

The artist remembered Hiffernan and the trip to Normandy fondly in a letter to Whistler written several years later:

Do you remember Trouville and Jo who clowned around to amuse us? In the evenings she used to sing Irish songs so beautifully, she had a feeling and talent for art…I still have the Portrait of Jo, which I will never sell…

A year later, when Whistler was working in Chile, Hiffernan stayed in Paris to oversee his affairs. During this period, she was painted for a second time by Courbet, in the sensual Le Sommeil. It has been widely hypothesized that the two also had a brief romance around this time.

Some even believe that Hiffernan is the model for the enigmatic L’Origine du Monde, Courbet’s infamous painting of a woman’s vulva, for which the model has never been identified. Concrete evidence has yet to be found to support this theory.

At the same time that she acted as an inspiration for two of the 19th century’s greatest artists, Hiffernan also drew and painted herself. But unfortunately, little proof of her work remains, as it seems she never publicly exhibited her drawings or paintings.

Hiffernan and Whistler’s relationship lasted until the 1870s, after which she reportedly moved to Nice and became an art dealer. The two remained close until the painter’s death in 1903. Hiffernan attended his funeral.

Hiffernan and Whistler were kindred spirits, rigorously committed to art and its creation. Both known for being brash and loud, both immigrants who had chosen to leave their home countries and seek inspiration in France. In each other, they found camaraderie and collaboration. Together, they pushed the boundaries of what a portrait could be.