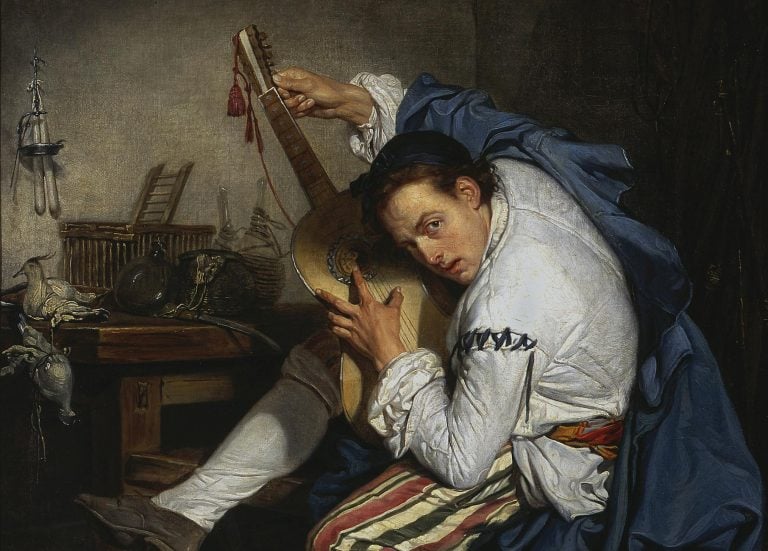 Musical instruments have always had a particular significance in paintings. Throughout the history of depicting music-making in art, the iconography of musical instruments ranged from their strict symbolism in Dutch 17th-century art to their appearance as objects of leisure and pleasant pastime, played by middle-class amateur and professional performers in the 19th century. See some of the most significant examples of guitar players in the art of Vermeer, Watteau, Tropinin, and Manet.

History of the Guitar

In the course of its history, the guitar as a musical instrument has evolved from a small, 16th-century instrument with double strings to its modern incarnation with a larger body and six or seven single strings. As a Spanish instrument, it appeared mostly in Spanish music. However, it also added a flavor of “spanishness” to orchestral or chamber music compositions by such foreign composers as Georges Bizet or Ludwig Minkus.

In paintings, different artists had different means of using the guitar.

Johannes Vermeer’s Guitar Player is an example of a 17th-century Dutch interior scene. The woman is playing a small guitar, which was a standard for a solo repertoire of that time. The instrument features beautiful decoration, with the sound hole covered by a beautiful rose.

Although it might appear strange, we may suggest that Vermeer didn’t have sound in mind when painting this picture, as it is impossible for the instrument to make any sound with its sound hole covered by a rose. Instead, the artist wanted us, the viewers, to look at the beauty of the girl with her curly hair, splendid pearl necklace, and sumptuous fur garment, as she is probably trying to impress her lover, invisible to us on the left.

This idea may be supported not only by her gaze, which is directed at someone standing outside the picture plane but also by the books laying on the right suggesting that the young lady is not only beautiful but also a virtuous woman.

A Lover with the Guitar

Antoine Watteau’s Mezzetin is a completely different character. Unlike Vermeer’s young lady playing the guitar, this lover, which is a character in Commedia dell’Arte, is not characterized by beauty and virtuosity. Instead, he is serenading the lady introduced by a sculpture behind his back. As in many of Watteau’s paintings, she is a patron of love. The guitar in his hands thus becomes an instrument to accompany his anguished songs of love, probably sung under the balcony of an invisible lady to the right.

The Russian artist Vassily Andreevich Tropinin painted guitar players throughout his artistic life. In this picture, located at the State Tretyakov Gallery, we can see a classical, Russian seven-string guitar, played by a musician who has just stopped his performance in order to look at us. Unlike in the previous pictures, his guitar seems quite untidy, with the strings frizzling out of the instrument’s tuning pegs.

Édouard Manet’s The Spanish Singer was the artist’s debut at the salon of 1861. The painting represents an amateur, left-handed musician. His instrument is strung for a right-handed player, thus showing that this singer is not familiar with the art of playing. The picture was carefully planned in the studio, with all the props, the model, and some attributes of still-lifes on the right.

Different artists had different ways of representing guitar players. While Vermeer painted an elegant woman with a sumptuous instrument, Watteau’s Mezzetin became a depiction of a tormented lover from Commedia dell’Arte, who accompanied himself by playing a simple guitar. Tropinin, who painted guitar players throughout all his artistic life, depicted an untidy instrument with seven strings, while Manet painted an amateur musician, posing as a left-handed player with the instrument, that was stringed for the right hand.