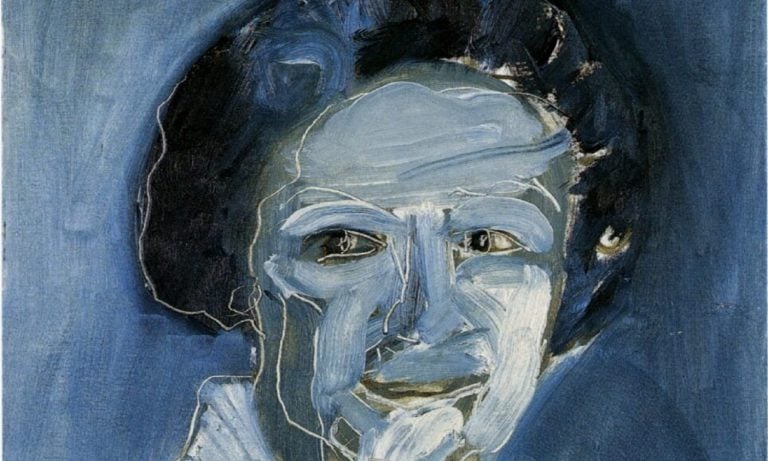 Paul McCartney, The Queen Getting a Joke, 1991. Artist’s website. Detail.

Creatively speaking, the term ‘art’ can mean many things. Whether it is music, writing, painting, sculpting, or drawing, it is all under the umbrella of ‘art.’ For the sake of this article however, let us look at several well-known musicians who created visual art outside of their musical lives. Musicians such as David Bowie, Paul McCartney, Joni Mitchell, and more have created anywhere from a few to hundreds of paintings, drawings, or sculptures. Furthermore, many musicians utilize the artwork for their own album cover.

The following list contains artists, some living and others not, who even during their busiest years as musicians managed to also create intriguing works of art during the 20th and 21st centuries. And even if these musicians are not your style of music, perhaps you will be able to enjoy their visual works.

The late great David Bowie was not only a superstar musician, but also an actor, and visual artist. Below is just one of his many self-portraits.

Though his music and overall aesthetic may not be for everyone, the singer’s visual art is worth a view. The watercolor painting below resembles Abraham Lincoln, sixteenth president of the United States, and face on the US penny.

Upon hearing of her close friend’s leukemia diagnosis, Stevie Nicks created the painting below. Though her friend passed away not long after, Nicks has continued to inspire others with her visual artworks. The musician said:

“I only draw angels. I started to draw when my best friend got Leukemia. And that’s what she’s left me.”

One fourth of the wildly popular and famous British band, The Beatles, Sir Paul McCartney is known for his song lyrics and voice. But did you know that the knighted Sir McCartney is also a prolific painter and visual artist? He stated that:

“I thought I would love to paint, I thought it would be very liberating for me, I had got a lot of visual ideas.”

Furthermore, McCartney was not the only member of The Beatles who has dabbled in visual art. John Lennon enrolled at the Liverpool College of Art for a short period before diverting his energy to music full time.

The late Cobain created this painting, part of a larger series, that shows his mental state shortly before his untimely death at 27. His daughter and widow, Courtney Love, chose this painting for a posthumous album nearly two decades after the artist’s passing.

The painting below obviously nods to Vincent van Gogh’s own self-portrait, doesn’t it? With the swirling colors, thick brush strokes, and Mitchell gazing solemnly into the distance, it is a near sister match to Van Gogh’s. She explained:

“I painted it around, I guess, 1993 when I met Don Freed [her boyfriend] — who’s the subject of some of these paintings in the show — for the first time. And he said, ‘How are you?’ And I said, ‘Undervalued.’…[M]y work was being rejected whereas mediocre work was being accepted and elevated on the basis of newness and youth and, you know, obvious mercantile speculation ran in that direction. So, rather than physically cut my ear off, I did it in effigy. I’m not that stupid.”

Dylan, described as one of the most influential and ground-breaking rock music artists in the past several decades, is also a visual artist, working in several different mediums. Dylan created a series of paintings dedicated to train tracks. It is a nod to the train motif found throughout his music.

What other connections can be made between music and art? Are some people gifted with such artistic prowess that everything they touch turns to gold, in so many words? Whether a musician writes a song about an artwork or vice versa, there is a constantly flowing connection. The verdict is that the two areas of art and music reflect and inspire each other so often that the connection cannot be denied.