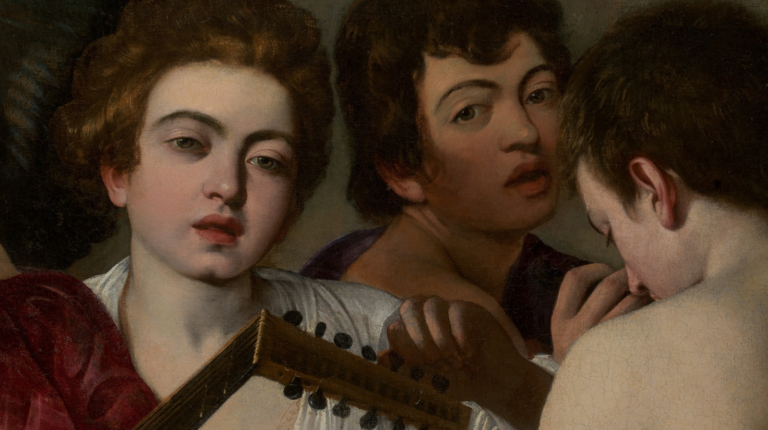 Michelangelo Merisi da Caravaggio (1571-1610) was a man of many faces. One of the most important baroque painters, he used a realistic painting style, paying attention to both the physical and emotional state of the subjects he painted. He had a tumultuous life and was accused of murder, assault, many fights, and served a period in prison. His painting style has had a big influence on the development of Baroque painting, especially when it comes to the use of dramatic chiaroscuro effects.

But the painting we present today is only a teaser of Caravaggio’s famous style. It’s his early painting,which shows four boys in quasi-Classical costume. Three are playing various musical instruments or singing, the fourth is dressed as Cupid and reaching towards a bunch of grapes.

This was Caravaggio’s most ambitious and complex composition to date, and the young artist clearly had some difficulties with painting the four figures separately. The boys relate to each other, they look more like independent sketches. But Caravaggio’s contemporaries saw this painting differently. According to Giovanni Baglione who was a primary biographical source of the artist’s life, around 1597 Caravaggio painted a concert, with some youths portrayed from nature very well immediately after joining the household of his first important patron, Cardinal Francesco Maria del Monte (1549–1626).

The Musicians is not a depiction of a contemporary concert, but an allegory of Music and Love. Usually, in these times painters were presenting Music as a single, idealized female figure. Caravaggio has conceived the allegory in a style that remains intentionally and provocatively ambivalent. Love is being symbolized by the Cupid reaching for grapes. Art historians agree that the cornetto player is Caravaggio’s self-portrait, and it is possible that the lutenist is a specific individual in Del Monte’s household, or even Caravaggio’s companion Mario Minniti, who was also depicted in such paintings as Boy with a Basket of Fruit, Bacchus, The Calling of Saint Matthew, and The Martyrdom of Saint Matthew.

The manuscripts show that the boys are practising madrigals celebrating love, and the eyes of the lutenist are moist with tears—the songs presumably describe the sorrow of love rather than its pleasures. The violin in the foreground suggests a fifth participant, implicitly including the viewer in the tableau.

Scenes showing musicians were a popular theme at the time—the Church was supporting the revival of music and new styles and forms were being tried, especially by educated and progressive prelates such as Del Monte.

In the past, a biographical or homoerotic interpretation was often attached to this picture. The sensual quality of the painting is very clear—particularly the watery eyes of the lute player whose gaze engages the viewer—but it is doubtful that the picture was intended to convey an explicitly sexual meaning. Caravaggio’s bisexuality can be established with some certainty. Some scholars suggest the strong likelihood that Cardinal del Monte was homosexual and this may have influenced his tastes in the art he commissioned (including those by Caravaggio). But we cannot say that for certain.

The painting has been discovered in 1952 in a private collection in the United Kingdom. It had been sold for 100 pounds in England, where both the buyer and seller did not recognize that this was the missing painting of Caravaggio, mainly due to the bad state in which the painting was. Now it is in the collection of the Metropolitan Museum of Art in New York.