Is there something more iconic for Paris than the bistro (after the Eiffel Tower, of course)? Let’s have a closer look at the artistic representations of bistros, characteristic French pubs, restaurants, or better “cafés,” as classically called in the main French city. Let’s take a tour through rues and boulevards to discover Parisian bistros one after the other!

The Origin of Bistros or Cafés

The origin of the word bistro is uncertain. Some sources suggest it could derive from regional words indicating wine growers, like bistraud or bistroquet. There’s also a legend: between 1814 and 1818 Paris was occupied by Russian soldiers, who were not allowed to drink alcohol. They used to do it anyway, but asked the waiters to serve them quickly, in Russian – bistro!

The Parisian bistros or cafés were shelters for artists since their opening. Here, poets, painters, and lovers of art in general, used to spend their days creating their masterpieces and discussing ideas, theories, and experiences. Painters sometimes even used the bistro and its hosts as the main subjects of their creations.

A Look Outside the Café

A large group of painters was fascinated by the global atmosphere of the Parisian bistros, as seen from the street.

One of them was Vincent van Gogh (1853–1890), who spent some years in Paris. In 1886 he represented a famous café in Montmartre, without focusing on people (who in fact are roughly sketched, not recognizable) but rather on tables, benches, and exclusive areas which almost recall chapels. The brushstrokes and the everyday subject are surely Vincent’s!

And what about a pure Impressionist? Edgar Degas (1834–1917) could not do without representing the most iconic place of his time. He painted a group of women at the outside tables of a bistro, all elegantly dressed and trying to relax. The young lady in the center captures the observer’s attention. She is dressed in light blue and white, emerging from the background, and she is in a dreamy air of reverie. Her thumb is on her mouth. What or whom is she thinking of or looking at? A poet, a painter, a lover?

An Italian artist loved Paris so much that he moved to the Ville Lumière and then represented it in his paintings. In 1871, Giovanni Boldini (1842–1931) took residence when the city was about to bloom again after years of war, going towards modernity, social life, theaters, restaurants, and of course cafés. In the heart of cutting-edge techniques, movements, and ideas, Boldini fell in love with the café itself.

The Conversation at the Café is one of his most representative pieces, showing both his contemporary society and his own life. He had relationships with two women, Berthe Morisot and countess Gabrielle de Rasty. The first was Manet’s model, a painter herself, considered pure and delicate like an angel. On the other hand, the latter was definitely sensual and carnal, without fear of showing her skills. In this painting, Boldini gathers both worlds in a café, putting Berthe on the left and Gabrielle on the right. Their attitudes reflect their personalities: Berthe feels uncomfortable, while Gabrielle shows her usual appeal, fascinating the observer.

…to a Russian Painter.

Konstantin Alexeyevitch Korovin (1861–1939) was a Russian painter, born in Moscow from an art-loving family. At a young age he attended the Moscow School of Painting, Sculpture, and Architecture. In 1885, he traveled to Paris for the first time and he was positively shocked by the city – he wrote that there he had found everything he had been looking for. He kept on visiting other countries, but Paris always remained one of his favorite subjects. Korovin particularly loved the Parisian bistros, of which he painted many versions and, differently from other artists, often perfectly identifiable ones.

Among these we find the Café des Sports, a famous bistro still in operation in Rue de Ménilmontant. At the corner of two streets, in the evening, some people dine at this beautiful café among the lights of the city and the reflections of the wet street. Another magical piece is the Café de la Paix. This is also still an institution in Paris, at the corner between Place de l’Opéra and Boulevard des Capucines. The painting recreates the nightlife of the wealthy society of Paris in 1900, between lights, cars, and beautiful clothes.

The Paris Café by Night is a little less sophisticated, with less intense lights and fewer people. It was probably on a peripheral artery of the city. It is totally different from the daylight in the Paris Café, where two ladies are surrounded by luxuriant trees and served by a waiter. Korovin said that Paris is the city of elegant fun, but also a place for relaxation and reflection. 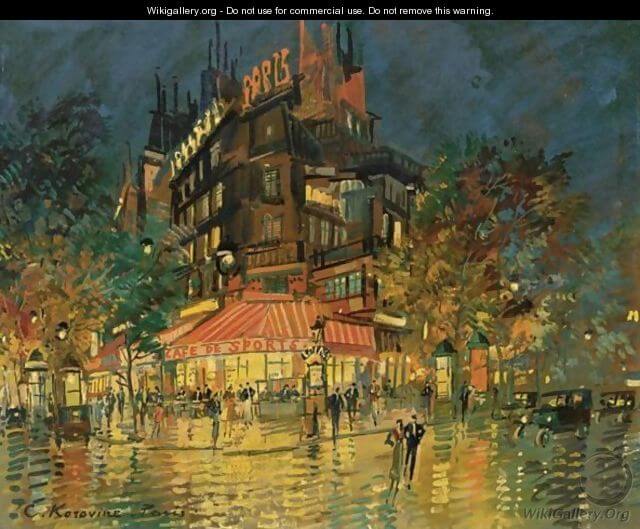 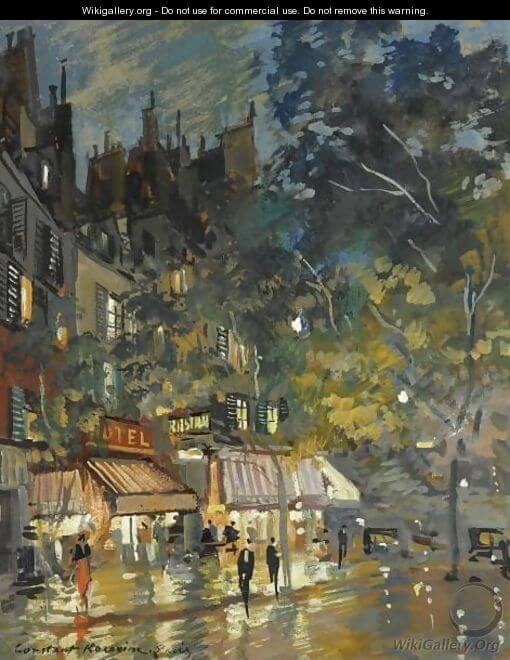 At the corner of two streets, in the evening, some people dine at this beautiful café among the lights of the city and the reflections of the wet street.

The painting recreates the nightlife of the wealthy society of Paris in 1900, between lights, cars, and beautiful clothes.

The Paris Café by Night is a little less sophisticated, with less intense lights and fewer people.

The Paris Café is shown in the daylight where two ladies are surrounded by luxuriant trees and served by a waiter.

The Life within the Bistro

The Local Artists and “Their” Cafés

As previously said, cafés were meeting places for intellectuals in a 19th century city. In the bistros, news, theories, and ideas were shared just like drinks and cigars. That’s why life within cafés was a fascinating subject itself, in particular for local artists.

Henri Gervex (1852–1929) was a painter in the second half of the 19th century who divided his life between army and art, traveling a lot in Europe. He never forgot his native city and his education, as seen in his Café Scene. Here, the artist painted a group of intellectuals, probably his friends, in the nearby café with a self-portrait in the middle and a lady in a pink dress showing her back.

Some excellent world-renowned Impressionists also challenged themselves with the theme of the café.

Pierre-Auguste Renoir (1841–1919) was one of the first. One of his famous paintings takes place in a café, with a lovely woman sitting beside a man and next to another woman. The colors blend and the brushstrokes are heavy, making this piece a totally Impressionist one. The centrality of the women may also suggest Renoir’s ability to appreciate and exalt feminine beauty.

Edouard Manet (1832–1883) loved the background of the bistro too, painting plenty of café scenes. He liked the atmosphere and often sat there for relaxation after work, meeting friends and talking with people.

The Café Concert is very suggestive. In the background, the mirror’s reflection shows an elegantly dressed singer, while the center of the scene is filled with a young and an elderly man, as well as a lady in the middle. They each have their mug and are relaxing. This everyday scene, perfectly balanced, displays Manet’s skills, especially in the representation of details such as hands and drinks.

The European Artists: A Bistro as Seen by a Spaniard

José Jiménez Aranda (1837–1903) was a Spanish-born artist. Like his contemporaries in Europe, he was educated in his home country but then travelled a lot to develop his art. He preferred paintings, although also learned to create stained-glass. In 1881, he moved to Paris where he stayed for nine years, working on Impressionist-like pieces.

One of these is El café, a crowded scene representing life within a bistro. The painting is Impressionist in subject and composition. However the accuracy of the figures, their details, and the lack of heavy brushstrokes underline the personal style of the artist who was also influenced by a period in Italy and his cultural background. In a sense, with its suffused light, complicated arabesques on the walls, and rich clothes of the people, the painting may recall a 16th- or 17th century Spanish atmosphere, with officials and sailors ready to conquer the world.

The Café of a Dutch

Isaac Israels (1865–1934) was an Impressionist painter of Dutch origin. The son of another painter, he sold his first work at 16 years old and decided to become an artist. After some years in Amsterdam, like many others he moved to Paris where he joined the Impressionist group. He felt on the same wavelength with them and thus became the only Dutch Impressionist in France. The artist enjoyed his life in the capital city with friends, buyers, and arts. He preferred paintings of women at work but he also tried subjects such as dancehalls and cafés.

The Moulin de la Galette, on the top of the hill in Montmartre was probably his favorite place. He represented it in different versions, one of which shows a couple, a man and a lady, who are talking while elegantly drinking and smoking. The background is filled with dancing couples. The two main characters stare at and lean towards one another, creating a delicate atmosphere of complicity.

The Parisian Bistro through the Eyes of a Russian

Ilya Repin (1844–1930) was a Ukrainian-Russian painter, contemporary, and friend of Korovin. He received authorization to travel abroad to further develop his artistic skills. Coming to Paris, he was fascinated by the society of the city. In contrast to Korovin, Repin preferred to focus on people, interiors of Parisian bistros, and real life rather than on composition like postcards, buildings, and lights.

He painted A Parisian Café, collecting many figures whose center is a solitary lady in black. Although nowadays she appears like an ordinary woman, at that time she suggested provocation and ambiguity. The details on her outfit, the umbrella, her attitude and gaze all imply these, and that is why other characters stare at her. The presence of sensuality was the main theme at that time, as already seen in other paintings. The bistros were home to artists, their ideas, and theories but also to relaxation and of course pleasure.

Out of the Parisian bistro but still curious about Paris and Impressionists? Don’t miss our many stories!

Looking at a painting and getting hungry? It might be a bodegón! Here we define the genre of Spanish bodegones in the context of 17th...