Basil and Elise Goulandris Foundation: Highlights from the Permanent Collection 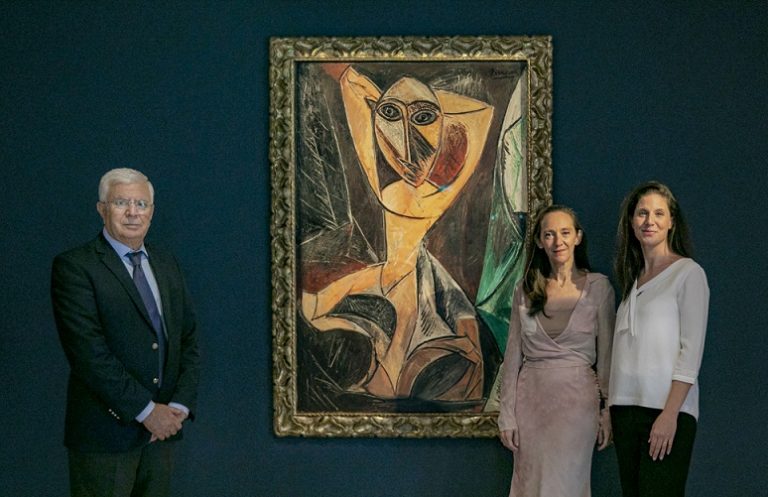 Alexander Iolas, The Greek Patron of the Arts

Basil and Elise Goulandris were a Greek couple who met and married in the 1950s in Manhattan, New York. They were highly educated, with a profound respect for art. The couple started building an enviable art collection. Their collection included names such as Pablo Picasso, Vincent van Gogh, Fernando Botero, Francis Bacon, Claude Monet, Nikki de Saint-Phalle, and many others. However, Basil and Elise Goulandris did not collect these artworks to showcase their wealth. Their goal was to build a museum of modern art in a central spot in Athens so that all people could see and admire them. Unfortunately, they passed away before the museum was built.

Finally, the Basil & Elise Goulandris Foundation was completed and opened in 2019. Its collection is impressive. I visited the museum a while ago, and these are a few of my favorite highlights. If you find yourself in Athens, you should definitely pay a visit and view the entire collection.

On the way to his crucifixion to Calvary, Jesus Christ fell while carrying his cross. A woman, Veronica, offered him her veil. Jesus Christ used it to wipe his sweat and blood and then returned it to her. When she took it, she realized that his face was imprinted on the veil, hence the name of the painting.

This is how the legend of Saint Veronica was born. It became widely popular in the 15th century, inspiring many great artists. To name a few, Albrecht Dürer, Hieronymus Bosch, Correggio, and others. So, when Theotokopoulos decided to paint it, the subject was already a big tradition in Catholic art.

This specific variation was created by Theotokopoulos himself, not with his students. He painted the fabric folds, the lightning, and the harmony of Jesus’ face thoroughly. It is as if the face floats in the dark background. This painting summarizes the artist’s artistic journey, combining elements of Byzantine and Western art.

The Eternal Springtime is a manifestation of Rodin’s love for Camille Claudel. At first, she was his apprentice, but she later became his partner and lover. They had a passionate affair. Rodin was 24 years older than Claudel, which often caused quarrels. So, Rodin removed their age difference from the sculpture.

The male figure embraces the female protectively. The woman accepts the embrace with tenderness while both are lost in this passionate moment.

Eternal Springtime became popular in 1898 when the couple had already broken up.

This piece is considered Braque’s masterpiece for the WWII period. The artist created it after he self-isolated voluntarily in his studio during the Nazi occupation of Paris. The painting shows a claustrophobic interior with no source of natural light. The complex composition of vertical and zig-zag lines showcases a feeling of anxiety and loneliness.

A woman is sitting at a table, playing cards, as a means to trick her boredom. She looks like she has two sides. The one side that shows us her face has colors and light; she is daydreaming. The dark side does not have that many details, though. Here she only looks anxious and nervous. However, the figure does not represent only a woman. The figure represents the artist himself, as Braque shared many of the woman’s traits at that time.

Another gem of the Basil & Elise Goulandris Foundation is this fascinating piece by Francis Bacon.

Francis Bacon is famous for the distorted figures he painted. He used to paint alone in his studio, using negative photos, mostly of himself. He created many triptychs. At one point, he decided he would paint only large-scale and small-scale triptychs. He called the latter studies, even though he had completed all of them. This is the case for this specific painting as well.

Three Studies for Self-Portrait shows Bacon with closed eyes against a black background. The face slowly erases from left to right, “As if the void devours it.” In the right painting, we can no longer see the right eye and cheekbone. Furthermore, the eyes remain shut as the face transforms into a shapeless mass. This depiction shows Bacon’s shyness and sadness.

This is the first oil painting that Picasso completed, right after The Young Ladies of Avignon. These two works signify the beginning of Cubism. Nude Woman with Raised Arms includes many of the artist’s influences. Yet, it is an original piece, which shifts from past teachings. There is no third dimension here. It is a two-dimensional composition. The geometric shapes force the viewer to reconstruct the actual figure in their minds. Thus, it is a rather intellectual painting.

Its colors are dark and aggressive. One, the female figure adds light to the painting. Her pose indicates movement since she has both arms raised above her head. The face looks like a mask. Moreover, the overall shape of the woman, with its irregular proportions, depicts a universal female. Her nudity gives her confidence and power. In a way, she threatens the ordinary female beauty standards with her aggressiveness.

When talking about artists with mental illnesses, the first name that comes to mind is that of Vincent van Gogh. His mental health had always been fragile, with many violent outbursts.

Right after he cut off his ear, Van Gogh went to Saint-Rémy-de-Provence’s psychiatric clinic. There, he painted non-stop. It is truly remarkable how one can see the differences in his paintings. When he had seizures, the brushstrokes were heavier, more aggressive. They also loaded more color onto the canvas. When he has calm, the overall feeling of his works is serene and peaceful.

During his stay at the clinic, he liked to paint nature, at least when he was allowed to go out. So, cypresses, mountains, and olive trees are recurring themes in his paintings during this period. Van Gogh created Olive Picking with the three women being present. The color story is soft and earthly. The heavy brushstrokes give the impression of moving leaves and sky, the working women. The artist created two more versions of this subject. Nevertheless, this one is more vibrant, as if it is a live scene.

7. Dynamic of a Head by Paul Klee

During the rise of the nazi party, Paul Klee fled Germany because he was considered a degenerated artist. He moved to Bern in Switzerland, where he worked on various techniques and subjects. He liked to examine opposite concepts, such as representation and abstraction, irony and poetry, etc.

In this painting, we observe the reconstruction of a head through several geometric shapes. It stands out from his other works of the same period due to the use of vibrant colors. Also, Klee put only eyes on the head as the only way to break the abstract pattern. We, as viewers, need to find by ourselves the forehead, the nose, the chin, and the shoulders.

Klee was influenced heavily by music. Dynamics was a term that stood for the range of sounds an instrument could make. In the case of this painting, dynamics represent the different alterations of the head, the different colors, and different perspectives.

8. The Painter’s Studio by Anselm Kiefer

Born in the ruins of WWII Germany, Kiefer believed that the artist’s role was to depict the dark faults of humanity. Moreover, he was constantly thinking about what modern people would do if they were in the shoes of the German people during their darkest times. On the other hand, Kiefer also believed that the artist ought to create beauty out of the mess and ugliness.

One of Kiefer’s favorite themes was the artist’s studio. It was the place where the artist was alone, recollecting his thoughts and creating. In this particular painting, we can see the studio from the outside. It looks like a witch’s hut or a destroyed building. At a first glance, the painting looks chaotic and pessimistic. Nevertheless, a closer look accents the beautiful colors that emerge in the composition. They symbolize hope amidst the abyss.

Botero is famous for his chubby figures. This still life from the Basil & Elise Goulandris Foundation is no exception. In this painting, the artist used only five colors. His goal was to keep things simple. The fact that all objects are round and curvy makes the viewer want to devour or squeeze them. So, Botero managed to engage the audience by accessing their dark thoughts of gluttony and greed.

This is an introductory collage for Lichtenstein‘s future oil painting, Nude with Yellow Flower. Actually, he made a series of nudes in the 1960s and then during the years 1993 to 1997. He drew inspiration from the DC romance comic books.

In this collage, Lichtenstein followed a procedure of multiple steps of creation. Besides, it is one of his characteristics as an artist. Even though the artwork looks like a comic strip, it does not have many elements left from the original. The woman wears nothing, has a mobile phone, and has no speech bubbles. She is sexualized, but not because of a male presence.

We hope you enjoyed these ten highlights from the Basil & Elise Goulandris Foundation. As aforementioned, the museum’s collection is vast, and it includes many great names. Hopefully, these highlights will make you visit the museum and see its treasures yourself!