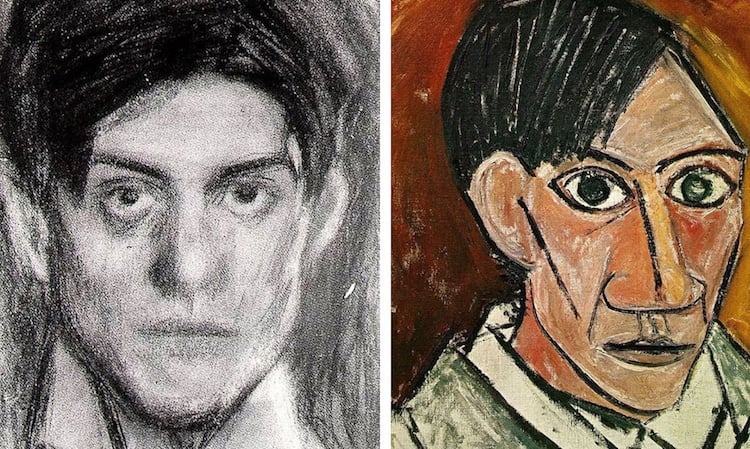 Pablo Picasso painted his first works during the early years of his life. According to his mother, his first words were “piz, piz”, a shortening of lápiz, the Spanish word for “pencil”. From the age of seven, Picasso received formal artistic training from his father in figure drawing and oil painting. Picasso’s father, Ruiz, was a painter who specialized in naturalistic depictions of birds. He was a professor of art at the School of Crafts and a curator of a local museum.

Picasso’s father and uncle decided to send the young artist to Madrid’s Real Academia de Bellas Artes de San Fernando, the country’s foremost art school. At age 16, Picasso set off for the first time on his own, but he disliked formal instruction and stopped attending classes soon after enrollment. Madrid held many other attractions. The Museo del Prado housed paintings by Diego Velázquez, Francisco Goya, and Francisco Zurbarán. Picasso especially admired the works of El Greco; elements such as his elongated limbs, arresting colors, and mystical visages are echoed in Picasso’s later work.

The painter was only 14 years old when he painted this portrait. It is one of the early works where Picasso used oil in a slightly superior format to what was usual for him.

The raw realism of the face, as well as the color and light treatment, reminds us of a clear influence from Spanish portrait tradition, especially that of Velázquez. Aunt Pepa hated to be painted, and maybe this is why she looks quite nervous in the portrait.

Picasso painted this work in the same period as when he produced many portraits of his parents.

4. Portrait of the Artist’s Mother

The portrait captures the moment where his mother, in profile, rests half-asleep, her head leaning slightly forward and her eyes closed, creating a placid air.

Science and Charity is one of the major works from Picasso’s early years of training. At just 15, Picasso felt mature enough to take on large, ambitious compositions. These were the culmination of his academic studies, which were in fact led by his father, José Ruiz Blasco.

Some months after meeting the sculptor and writer Jaume Sabartés—who would be his intimate friend and, from 1935, personal secretary—Picasso produced two watercolour portraits of him. Throughout their long relationship, Picasso produced many portraits of Sabartés in pencil or oil, many full of irony – an irony mixed with complicit jokes and affection, which was the basis of their friendship.

Picasso travelled to Horta d’Ebre (Horta de Sant Joan, Terra Alta, Tarragona) in June of 1898. He would be marked by a strong impression: “Everything I know, I learnt it in the town of Pallarès”, he would say years later.

Picasso painted this work during his visit to Paris in Autumn 1900. Also known as The Fair, it falls within the series of works Picasso produced based around Parisian nightlife with clear influences from Steinlen and Toulouse-Lautrec. It was included at the 1901 Vollard exhibition in Paris.

This is a portrait of a morphine addict or prostitute painted in quick flowing, highly colorful strokes with a partly divisionist pictorial treatment. Likewise, the energetic, thick brushstrokes, an influence from Van Gogh, and the black outline of the figure – also a feature of some Van Gogh works and the French Les Nabis artistic movement – are worth commenting on.

Recently I showed you views of typical wintery Russia by Korovin, which you can see here. Today we'll see instead something out-of-ordinary. Although...

What’s your favorite color? Why? Have you ever tried getting to know someone better by asking this question? It can fill an awkward silence in...