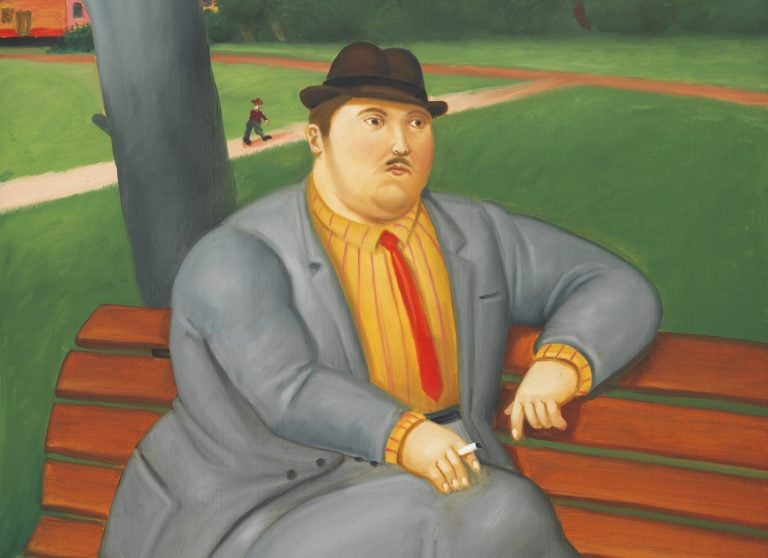 Fernando Botero is a Colombian figurative artist and sculptor. Once you see his art, you will never forget it. He depicts people and figures in large, exaggerated volumes. He is considered the most recognized and quoted living artist from Latin America and his art can be found in highly visible places around the world. Are you ready for this ride? Here are 10 facts you need to know about Fernando Botero. I can assure you, it is going to be big.

I was looking for the right word here – enlargement, exaggeration, chunkiness, plumpness. When you see any of Fernando Botero’s art, you know what I mean. You can’t mistake the way he paints with anyone else. The style has even its own name: Boterismo. It is not only Botero’s signature, it is also his way of representing political criticism or humor.

There is a funny story that explains how the artist started his style. In 1956, while Botero was living in Mexico City, he painted a mandolin with an unusually tiny sound-hole. This led to the instrument having huge proportions. He loved it and started to paint like this.

2. But he doesn’t paint “chubby” people

Botero always claims that he doesn’t paint chubby people, for him it is the “sensuality of form”. The volume of his characters allows him to emphasize and highlight certain features.

3. He was born in Medellín. Yes, in that Medellín

Botero was born in 1932 in Medellín, Colombia. Located in a valley of the Andes mountain range, Medellín was at that time a relatively small and isolated city. His father, David, was a traveling salesman who died suddenly at the age of 40. This left a four-year-old Botero, his two brothers, and his mother (who worked as a seamstress) destitute.

In 1970s and 1980s Medellín became infamous for being a base of the Medellín Cartel. This was a highly organized drug cartel founded by Pablo Escobar. We will talk about that more later.

4. Fernando Botero was supposed to be a bullfighter

Botero’s uncle, who was a father figure to the young artist, enrolled him in a training school for bullfighters. Luckily, this uncle soon realized that this wouldn’t work. The fact is Fernando Botero (then 12 years old) painted his first watercolors of bulls and matadors, instead of training. The paintings were sold by a man who traded tickets to bullfights.

5. He loves to copy the great masterpieces

At the age of 20 Botero won a second prize in Bogota’s Salón Nacional de Artistas. To celebrate he traveled to Europe where he spent a year learning about Renaissance artists and copying the Old Masters. It was a game-changer for him and influenced his art. Since that time he has created countless versions of the classic pieces of Leonardo da Vinci, Rubens, Velazquez, Jan van Eyck… You name it.

Even though Fernando Botero has stated that “art should be an oasis, a place of refuge from the hardness of life”, his work is at times very politically engaged. Beginning in the 1990s, he painted a series focusing on Colombia’s drug-related violence happening in his country. One painting, Death of Pablo Escobar, depicts the Colombian drug baron being gunned down by the police.

You can read more about it here but we need to mention that Escobar himself was known to have used works by artists such as Salvador Dalí and Pablo Picasso to launder money. Botero was reportedly dismayed when he learned that his works had been seized in a raid on Escobar’s home.

Explaining his response to his country’s drug violence in 2000, Botero stated,

The Colombian drama is so out of proportion that today you cannot ignore the violence, the thousands of displaced and dead, the processions of coffins. Against all my principles I had to paint [the violence].

Martin Hodgson, “A painter’s mission to heal Medellin“, The Guardian.

7. He is a Colombian patriot

Another fact about Fernando Botero is that he loves his country. He even gave himself the title of “the most Colombian of Colombian artists”. Colombia returns this love and as a result, the country is full of squares, roads, and plazas with his name.

Look at this painting which he painted in appreciation upon receiving first prize at the Coltejer Art Biennial (yes, it is him kneeling). Even the Virgin Mary is 100% Colombian here!

8. He has a massive art collection

Botero owns a number of paintings from the European Masters of the 19th and 20th centuries. He also donated more than 300 of his works to Museum de Antioquia in Medellín and to the Banco de la República in Bogotá. The second part of the collection formed the basis for the Botero Museum in Bogota.

9. Fernando Botero is also a sculptor, and his works are… enlarged

Along with the numerous Botero sculptures that can be seen in his native Medellín, monumental pieces by the artist can also be enjoyed on the streets of New York, Paris, Barcelona, Madrid, Jerusalem, Bamberg in Germany and Yerevan in Armenia. They all draw large crowds of visitors every day.

Fernando Botero is now 89 and he continues to work on his art tirelessly. He lives and works between Paris, Monte Carlo, Pietrasanta, and New York. Meanwhile, the demand for Botero’s paintings and sculptures remains strong. The prices of his works put on auctions show this. I can believe that, I would love to have one of his works!

***11. Bonus: One of the greatest memes ever is based on his work

Lastly, a bonus fact about Fernando Botero! It probably shouldn’t be a surprise to anyone that Botero’s painting Pope Leo X (after Raphael) became a popular internet meme. It is typically seen with the caption “y tho”. “Y tho” is an abbreviation of the question “why though?” According to KnowYourMeme it is a popular slang phrase usually asked in a trolling manner in response to a senseless action or statement. A painting of a round, fat pope with a small face is perfect here.