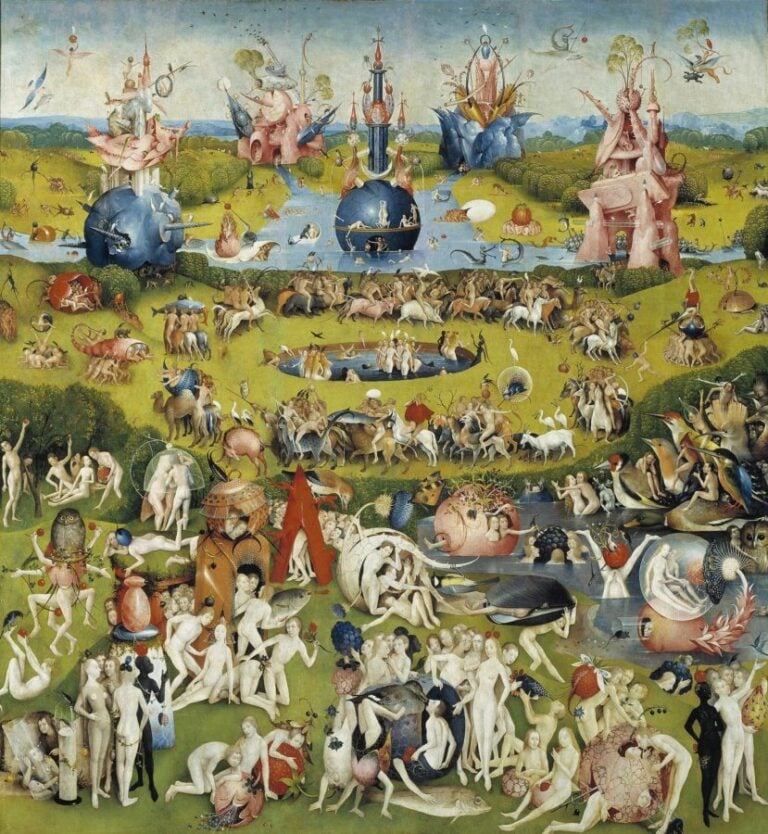 Hieronymus Bosch is one of the most fascinating artists in the history of art. From the known information about Bosch, he seemed to have a very ordinary and dull life in a small Dutch town, but in the same time he created the most extraordinary and puzzling masterpieces ever known. Some of them like a triptych The Garden of Earthly Delights, remains a mystery for these days. The most respectful experts in late gothic iconography have tried to interpret meaning and symbolism of this painting and have been unable to reach a definite conclusion.

A dissonance between ordinary life of Hieronymus Bosch and his fascinating creations could be potentially explained by the times he lived in. Pre-reformation movements, discoveries of a New World, general criticism of Church and social morality could have influenced Bosch’s believes, spiritualism and imagination.

As little as we know for certain about Hieronymus Bosch or Jeroen Anthoniszoon van Aken (his real name), we can say that he was born around 1450, lived and worked in the Dutch town ‘s-Hertogenbosch. Around 1480 he married Aleyt Goyaerts van den Meervenne from an aristocratic family, what gave him a noble status. We also know that by 1486-87 he was registered as a member of a religious association the Brotherhood of Our Lady, which was devoted to the worship of the Virgin and to charitable works. When Bosch died in 1516, his funeral was held in the chapel of Our Lady.

Works of Hieronymus Bosch were commissioned by different institutions. Some of them were ordered by the Brotherhood of Our Lady, church of St John and even by Philip the Handsome, duke of Burgundy. However, The Garden of Earthly Delights must have been created for a different client. The triptych form and the size could suggest a person or institution connected to Church, but the subject and the spirit of the middle panel contradicts this statement. It was suggested that Bosch had ties to a heretic society known as Homines Intelligentiae or the Brethren of the Free Spirit, which believed a closer contact with God could have been achieved through return to the nature, where body and sensuality were pure and innocent; just like in Paradise before the original sin. This kind of religious societies believed their path to salvation was the rightful one, and others were condemned to hell. This point of view could easily explain idealistic and joyful atmosphere of the middle panel and contrasting scenes from Hell, where characters not encountered anywhere else on the painting, appear in Hell punished and tormented for their sins.

Hieronymus Bosch created two more large triptychs like The Garden – The Last Judgment and The Haywain. All three of them share the same composition, where motives from Paradise were presented on the left panel and scenes from Hell on the right one. The title motives are situated in the middle section of the painting. The Last Judgment and The Haywain have strong moralising message achieved by a narrative flowing from the left side of the painting to the right. From creation of the first couple and their banishment from Eden, through the fall of mankind in the middle section, to the punishment and damnation in Hell. The Garden of Earthly Delights seems to have a different connotation.

On the inner left panel, we can see Creation of Eve in Paradise, where, in spite of the presence of Evil shown as fantastic and disturbing creatures, the whole scene is kept in harmonious and positive atmosphere. The same atmosphere is extended to the middle panel, where title Garden of Earthly Delights is presented. From these two parts stands out the right panel, also known as Musicians Hell. Not only dark tones separate it from the rest of the triptych, but also the condemned characters, like knights and nuns, are not being punished for their sins exposed in the previous part of the painting, but they are totally new to the story. These differences, as suggested by one of the Hieronymus Bosch’s experts – Wilhelm Fraenger, could confirm the theory, that the artist was familiar with Homines Intelligentiae doctrine, and the whole triptych was an expression of their believes.

In the middle panel we can also see dark skin people and exotic fruits what could suggest Bosch was acquainted with stories about Africa or newly discovered world of America and its native people, who lived in harmony with nature, wore no clothes and knew no sin. A potential proof that Homines Intelligentiae might have been right?

The mystery and individuality of The Garden of Earthly Delights shows us how fascinating figure Hieronymus Bosch must have been and in how interesting times he lived in. Times that allowed him to create so divergent paintings – from deeply ecclesiastical and moralistic pieces like the Haywain, to The Garden where new spirituality have found its expression.

The original of The Garden of Earthly Delights triptych can be admired in the Museo del Prado in Madrid.