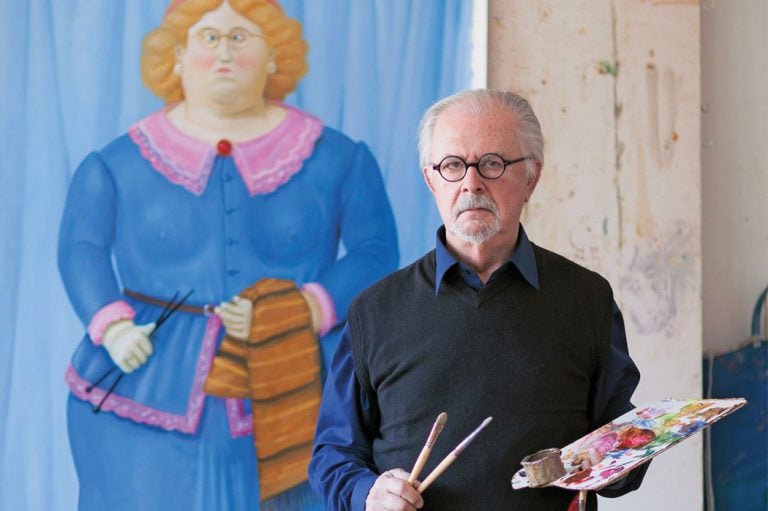 Fernando Botero standing in front of his work. Peak.

Colombian artist, Fernando Botero, demonstrates how differently we can all view the same object. Although, Botero is known for creating “chubby” figures in his art, he argues that his intention isn’t to represent weight. Instead, his aim is to give prominence to volume. Here is what Botero wants to say with his “chubby art”. Read about Boterismo in art!

As well as from being an outstanding painter, Botero has created sculptures which are also found all over the world. Because his figures have one main characteristic (absolutely all of his figures are “chubby”) his works are easily recognizable. This personal trademark is appreciated internationally. In fact, he is one of the most renowned Latin American artists in the world. Yet the Colombian artist claims that he does not create just “chubbies.”

Fernando Botero focuses exclusively on painting, sculpting and drawing figures who appear overweight. This perception of the human form, with its rounded sides and most notably the increasing body size, makes him the creator of what we know today as “Boterismo.” At first sight his figures have bodies that we would normally categorize as fat or obese. However, the author insists that, on the contrary, he is highlighting the natural shape of the body, with its curves and its sensuality. Botero does not paint fatness, but instead, bodies where the natural volume is highlighted. By giving more prominence to volume this makes his figures more plastic, and more monumental.

Botero transforms his models as he paints them, without the need for any reference figures. His first step, is to modify them in his mind. Then he adapts them to his unique style. His love of volume is not only for people. He also paints animals in the same way, always exaggerating their curves and rounding the edges.

Botero argues that painters should look more on the positive side. He emphasizes that art is just a celebration of life. Thus he chooses gentle themes for his paintings. He notes that painters have often worked on the exaltation of life, even in the midst of great tragedies.

For example, Impressionism: has there ever been a depressing Impressionist painting? Even during times of war and national tragedies, painting has maintained a positive attitude towards life. Today it’s different. Botero believes that now art is more about creating a scandal, or causing shock. Traditionally, that’s not what was done. Kindness predominates in his art, but from time to time he expresses his social commitment and paints pictures about torture.

According to the artist who only makes chubby art, bulls have always been an absorbing subject for him. For this reason, he does not agree with the prohibition of bullfights in Catalonia and Bogotá. In his judgement, everyone has the right to have hobbies. It is not the only cruel thing in life: hunting, and fishing are cruel. People who eat lobsters and throw them into the pot are also cruel, but nobody says anything about that. This consummate artist maintains a very straightforward position on this subject.

In painting, his masterful handling of oil, pastel and watercolor is outstanding. He also draws in charcoal, pencil, bistre and sanguine on canvas and paper. While he does sculpt in bronze giving his sculptures a variety of patinas, he mainly sculpts in Carrara marble.