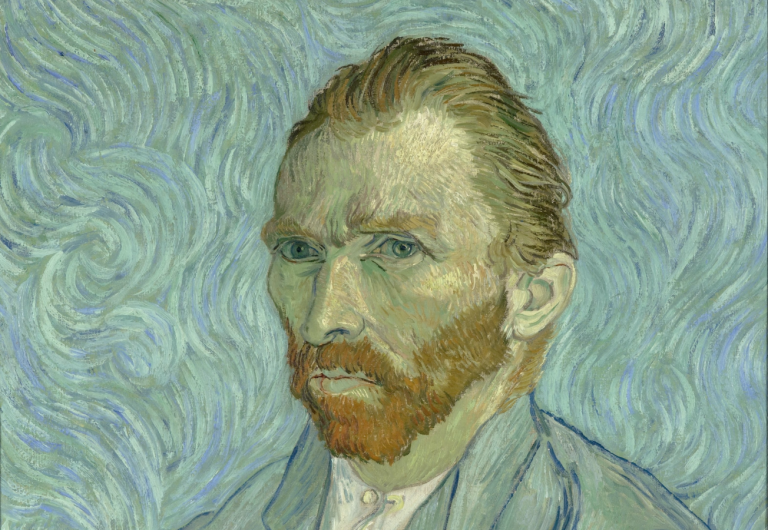 Art Saved My Life! An Alternative Look at the Mental Health of Vincent van Gogh

Painting of the Week: Van Gogh’s Seascape near Les Saintes-Maries-de-la-Mer

Van Gogh started to paint very late in his life, when he was 27 years old. He never received any formal training. His first self-portraits, like this one, are dated 1886, which is also the exact time he portrayed himself as an artist. Notice the sombre colors he uses. He would soon abandon them after seeing the work of the Impressionists in Paris.

Van Gogh created a majority of his self-portraits—over 25—while he was in Paris (1886–88). Here he presents himself as a respectable bourgeois, wearing an elegant suit and felt hat. We can also see how Vincent changed his palette: the light, pastel colors to such an extent were unusual for him. He even changed the color of his eyes to match it; in this painting they are grey-blue, when in reality they were green.

Interesting fact: the largest collection of van Gogh’s self-portraits is held in the Van Gogh Museum in Amsterdam.

Van Gogh was all eyes and ears in Paris. Here we see clearly how he studied and applied the technique of the Pointillists. But instead of painting points, he uses short stripes of paint in different directions. He even created a kind of halo around his head. It serves as a sort of prelude to what would later become his trademark swirls.

This is the last work van Gogh produced in Paris. At the time, Vincent felt exhausted by this frantic city and that shows in his face. He told his sister, Wil, how he had portrayed himself: “wrinkles in forehead and around the mouth, stiffly wooden, a very red beard, quite unkempt and sad.”

Though sad and melancholy, he made a statement. Van Gogh here is a painter, a modern artist who uses a new painting style, with bright, nearly unblended colours.

After his Paris episode, Vincent van Gogh moved to Arles in hopes of creating a community for artists to exist in mutual supportiveness and encouragement. He invited Paul Gauguin, an artist whom he had befriended in Paris, to come stay with him.

The story of Vincent van Gogh’s self-mutilation (cutting off his own ear) has become a defining part of van Gogh’s place in pop culture. But, not everyone knows the exact how and why of its happening. In Arles, Vincent and Gaugin quarreled often, sometimes violently. During one of their arguments, on the evening of December 23, 1888, van Gogh had a seizure during which he threatened Gauguin with a razor only to then injure himself, severing part of his left ear. In a state of excitement, he then brought the dismembered lobe to the Maison de Tolérance bordello where he presented it to a prostitute named Rachel. When Gauguin returned the following morning, he discovered that the police had arrived at the house, and blood was splattered in every room. Van Gogh had severed an artery in his neck, and was in grave health after losing so much blood. He was subsequently hospitalized and confessed to having no recollection of what happened during this fit. This self-portrait was created for Paul Gauguin as part of a swap between the artists, before the whole story happened.

Van Gogh painted this self-portrait probably while still hospitalized after the incident, as the artist is shaven and neat. What distinguishes these portraits from those that came before is a dramatic change in the artist’s look. Van Gogh appears tired and disillusioned. He remembered little of the tragic incident with Gauguin, but one thing was clear to him: the dream of the commune of artists had crumbled to dust.

Van Gogh painted this self-portrait shortly after he returned home from the hospital, having mutilated his own ear. The artist used a mirror for his self-portraits, which is why some mistakenly think that he lost part of his right ear instead of his left.

Van Gogh is in his studio, wearing his overcoat and a hat. His facial expression is still and melancholy. On the right we see a Japanese print: van Gogh loved Japanese art and used it as an inspiration many times.

This canvas is one of the very last self–portraits painted by van Gogh. In the first months of the artist’s voluntary internment at the asylum, the artist mostly painted the surrounding landscape. But, in early July 1889, while Vincent was painting in the fields near the asylum, he suffered a severe breakdown that could have been a symptom of epilepsy. Incapacitated for five weeks and greatly unnerved by the experience, the artist retreated to his studio, refusing to even go out to the garden. This painting is the first work he produced after recovering from that episode. In a letter to his brother Theo written in early September 1889, he observed:

They say—and I am very willing to believe it—that it is difficult to know yourself—but it isn’t easy to paint yourself either. So I am working on two portraits of myself at this moment—for want of another model—because it is more than time I did a little figure work. One I began the day I got up; I was thin and pale as a ghost. It is dark violet–blue and the head whitish with yellow hair, so it has a color effect. But since then I have begun another one, three quarter length on a light background.

Van Gogh once wrote to his brother Theo:

People say – and I’m quite willing to believe it – that it’s difficult to know oneself – but it’s not easy to paint oneself either.

We may think that van Gogh must have been vain since he painted himself so often. But, it wouldn’t be true. The artist was chronically poor and simply didn’t have money to pay for models- he had to paint himself instead.

There is one more clue that could give us more light into van Gogh’s self-portraits. One of the van Gogh’s artistic idols was Rembrandt van Rijn, who created one hundred self-portraits. Van Gogh admired him a lot, calling Rembrandt the “magician of magicians.” Maybe Rembrandt’s path was one that van Gogh wanted to follow.

Van Gogh painted this self-portrait after his relationship with Gauguin boiled over. Looking quite anxious in this particular portrait, van Gogh gave this haunting image to his mother as a birthday gift.

Art historians are divided as to whether this painting or Self-portrait without beard is van Gogh’s final self-portrait. Vincent is wearing a suit and not the pea jacket he usually worked in. The features of his face are hard and emaciated, his green-rimmed eyes seem intransigent and anxious. The dissolving colors and turbulent patterns signal a feeling of strain and pressure, symbolising the artist’s state of mind, which wasn’t good at that time.

According to his letters, van Gogh worked on a second self-portrait around the same time. Although its background is animated with swirling brushstrokes, the more muted color scheme lends the image a calmer aspect. The artist believed, however, that the painting seen here captured his “true character.”

Vincent van Gogh died of a self-inflicted gunshot wound in July 1890. He had actively pursued his art for only five years.

If you haven’t had enough of Vincent’s face, we have something extra for you. We have four portraits of Vincent van Gogh created by others. It is so interesting to look at these familiar facial features through the eyes of other, famous artists. Here they are!

John Peter Russell was an Australian painter who got to know Vincent at Fernand Cormon’s studio in Paris. He painted van Gogh in 1886 in a conventional, realistic style. The painting was overpainted later – previously Vincent wore a striped blue suit. The analysis has also revealed that over van Gogh’s head, Russell painted the words ‘Vincent, in friendship’.

Van Gogh was very attached to this portrait. Years later, he wrote to Theo:

Take good care of my portrait by Russell, which means a lot to me.

This chalk pastel on cardboard is by Henri de Toulouse-Lautrec. He met van Gogh, ten years his senior, when they were both taking lessons at the Fernand Cormon studio. It portrays van Gogh during the time he was living with Theo, in the Montmartre. Toulouse-Lautrec depicted van Gogh in profile from the right, learning forward at a table in a bar with a glass of absinthe, as if in conversation.

A mysterious drawing by Lucien Pissarro represents the only depiction of Vincent and Theo together. Theo, in the top hat, is talking with his brother, who sits with his arms crossed in a rather defensive pose. Lucien, the son of the Impressionist painter Camille, sketched the two men in Paris in 1887.

This painting is part of a swap that Vincent had with Gauguin before everything ended badly. Van Gogh’s first impression on seeing the painting was that Gauguin had depicted him as a madman. He later softened his view:

My face has lit up after all a lot since, but it was indeed me, extremely tired and charged with electricity as I was then.

Interestingly, the painting was created in December, a time far too late for painting sunflowers from an actual study. Thus, it’s quite probable that van Gogh painted a copy of one of his own sunflower pictures. The landscape in the background is also fictional: unlike van Gogh, Gauguin liked to work from his imagination, a point about which both artists argued.