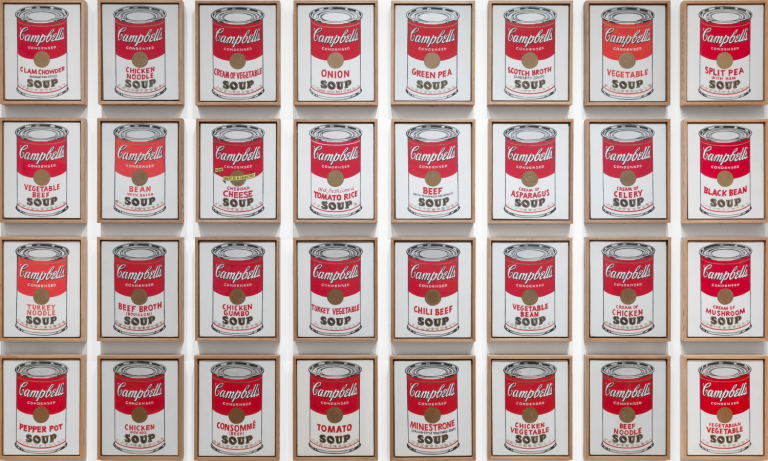 Everyone is familiar with Pop Art and everyone can recognize its most iconic artists and artworks. Cartoon characters, food, everyday products, are only a few of Pop Art’s subjects. However, most of us tend to believe that Pop Art is only the colorful images we see and that there is nothing more to it. Well, we couldn’t be more wrong. Pop Art has a whole philosophy behind it. Back when it was established its artists were also intellectuals. That is, not actual academic intellectuals but they read, observed, and discussed society and its issues. Each artist found his own way to reflect on society. Their works in total created the movement. So, let’s dive into Pop Art 101 to clear everything up!

Pop Art originated c. 1955-1970, both in Europe and the USA. In the USA it found its most classic expression. At first, Pop Art was all about plastic arts. However, it penetrated music, literature, fashion, cinema, graphic arts, and advertising very soon after. It embraced everything popular, from which the term Pop Art originated.

As a matter of fact, the Independent Group (IG) in the UK founded the movement. Its members were artists, art critics, and architects of the Institute of Contemporary Arts (ICA) in London. The Institute was a meeting place for intellectuals and artists in London, in the same way that cafés were in Paris and exhibition openings were in New York. Lawrence Alloway, an art critic and member of ICA, was the first to use the term ‘Pop Art’ in his essay from 1958. He talked about an understated by intellectuals popular culture that included advertising, television, cinema, popular idols, science fiction, magazines, and pop music. So, the IG referred to Pop Art in the same way as any art.

Just what is it that makes today’s homes so different, so appealing?

In 1956, the IG organized an exhibition, This Is Tomorrow, at the Whitechapel Art Gallery in London. It was then that Richard Hamilton presented his very famous collage, Just what is it that makes today’s homes so different, so appealing?

While looking at it, we see a “Mister Cosmos” kind of guy, holding a lollipop that says “Pop” on it. Pop as popular but also as it is used in comic books to signify an explosion or a loud noise. Also there is a naked young woman, like a call-girl, posing provocatively on the couch. The room is filled with all the objects that were considered necessities for the modern household: a TV with a smiling woman talking on the phone, a recorder, an electric vacuum, a big can of ham used as a decoration in the living room, a Ford advertisement, a big photo-romance on the wall. Moreover, outside the window is the luminous entrance to a movie theater.

This piece remained in art history because it proved that Pop Art characterized the modern society of consumerism, mass culture and media, advertising, cinema, comics, and photo-romances.

In the beginning, Pop Art was considered an underground movement, especially in the USA. It didn’t matter that there was an actual way of thinking or, for example, that the revival of Dada played a huge role in its appearance. The first two artists that created Pop Art were Robert Rauschenberg and Jasper Johns. But some others helped move it out of obscurity: Andy Warhol, Roy Lichtenstein, Tom Wesselmann, James Rosenquist, Claes Oldenburg, Robert Indiana, and others. A series of exhibitions in 1960-1962 established Pop Art as a legitimate art movement.

Besides the aforementioned subjects, new ones appeared in the American artworks, such as food. Cans, hamburgers, ice cream, pies, etc. became the center objects of the artworks. Also, the artists used vibrant colors and huge canvases. However, the approach of the subject was cold, detached. There was no emotion in this celebration of colors and fun looking art pieces.

Andy Warhol is the most famous artist of Pop Art. He didn’t only create art but was also a movie director and a night-club manager. He mostly used graphic arts and silkscreen prints. Warhol became the most distinguished artist of the society of consumerism and advertisement. Despite that, he also depicted the dark side of life too: death, accidents, executions. There was a darkness in what was generally a happy side of art.

Contrary to Warhol, Roy Lichtenstein painted only the bright side of life. His most characteristic works are his comic strips. He also used pop figures of the time though, such as Mickey Mouse, Donald Duck, and Bugs Bunny.

During the 1960s, Oldenburg started working on some of his most famous pieces, the soft objects. They remind one of Dali‘s soft watches and Magritte‘s transformations. Soft sculptures became part of the early successes of Pop Art on an international level. But Oldenburg created some gigantic and monumental sculptures too. The point was to mock certain things, such as consumerism, the Vietnam War, etc. In the Venice Biennale in 1999, he presented Lion’s Tail. The lion was evangelist’s Marc symbol, who was (and still is) the protector of the city.

Pop Art in Europe, just like in the USA, had no desire for stylization, only to recognize and comment on popular culture. Even though sometimes it seems like the artists pose a criticism on popular culture, it is not actually the case. Most of the times it is a note on it, not a moral observation.

In his famous work, $he, Hamilton used bitty images to portray the modern American housewife. A small plastic object that is stuck high in the surface symbolizes the female curves and glance. The white curvy shape at the bottom is her apron. The red color on the floor signifies blood. The toaster mixed with the electric vacuum tube and the black spots are a reference to Marcel Duchamp.

Paolozzi’s style is more industrial and geometric. His artworks, even though they are Pop, are also melancholic. They depict the impact of technology on human life from a pessimistic point of view.

Peter Blake is one of the most famous artists of British Pop Art. He enriched his works with symbolism or elements of the past. One of his most famous pieces, On the Balcony, consists of old family photos, old artworks, magazine covers, and objects from everyday life.

No one can talk about European Pop Art without mentioning David Hockney. He is its most prominent representative, even though he moved to the US. He had an eccentric appearance and was associated with the Beatles. Hockney’s first paintings were influenced by Francis Bacon. Later he found his personal style. Hockney painted in strong and intense color combinations on big, flat surfaces. His works were related to his own sexual experiences. By 1964, he was already living in California, where he made references to famous Hollywood stars and their luxurious way of living.

Whether a reflection of the modern way of living, or a denial of abstract trends, and especially of Abstract Expressionism, Pop Art lived for many years in Europe and the USA. It became one of the most important artistic expressions of the second half of the 20th century. Even though the core movement dates up to the 1970s, it never actually decayed. In fact, it reinvents itself constantly, as popular culture keeps forever changing. Pop Art will probably never die. Especially nowadays when the internet has made access to almost everything so easy. We just see new idols and icons, products, ideas, in new media.